COPLOW, dam of Group 1 1,000 Guineas winner BILLESDON BROOK, was the headline act on the second day of the Tattersalls December Mares Sale which saw 22 lots sell for 500,000 guineas or more.

COPLOW, the dam of the Group 1 1,000 Guineas and Group 1 Sun Chariot Stakes winner BILLESDON BROOK looked the star lot in the catalogue for the 2019 Tattersalls December Mares Sale and the daughter of MANDURO did not disappoint, selling to MV Magnier for 2,100,000 guineas.

Agents James Delahooke and Ross Doyle, who was standing with the Barnane Stud team, took the price to 2,000,000 guineas before Magnier made his one and only bid to secure the ten-year-old mare who was offered in foal to KINGMAN.

"She has done it already, let's hope she can continue. She is in foal to a hot stallion," said Magnier. "I imagine she will go to Galileo, but I will have to speak with the lads."

COPLOW was consigned to the December Mares Sale by Stowell Hill Stud’s Jeanette McCreery whose husband Bob died in 2016. She is also the dam of the Listed winner BILLESDON BESS who was bought here last year for 800,000 guineas by James Wigan on behalf of Erdenheim Farm. COPLOW’s siblings include the Group winners ANNA NERIUM, MIDDLE CLUB and PIPING HOT.

McCreery said: "I found that more nerve-wracking beforehand. She was very popular all around the ring. We have so many members of the family that something had to be sold to keep it all running.

"It is a great credit to Bob, but credit must go to the Hannons who have made this family." 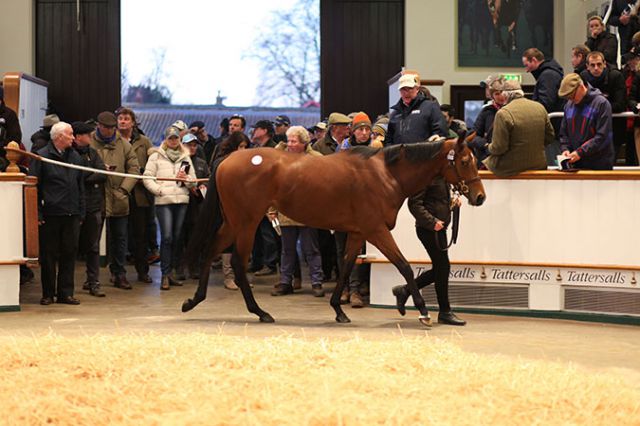 BIG BROTHERS PRIDE, who was a wildcard entry to the Tattersalls December Mares Sale, was purchased by BBA Ireland’s Eamonn Reilly for 975,000 guineas after he saw off the determined effort of Northern Farms’ Shunsuke Yoshida.

The three-year-old daughter of INVINCIBLE SPIRIT was consigned by Tweenhills Farm & Stud and is a half-sister to the Group 1 Prix Maurice de Gheest winner POLYDREAM. Hailing from a ‘Wertheimer’ family, the filly is out of the Grade 3 placed GREEN TUNE mare POLYGREEN.

"She is for a US buyer and she goes to America," said Reilly. "She won't race on and will be syndicated to breed. She is from bloodlines that rarely come onto the market." Turkish owner breeder Ibrahim Araci has been busy at the December Mares Sale, buying six lots so far for 2,235,000 guineas headlined by the INVINCIBLE SPIRIT mare GUERRIERE at 825,000 guineas.

The Listed placed five-year-old was consigned by European Sales Management in foal to LOPE DE VEGA and is a half-sister to the Group 3 Prix d’Aumale winner SOUSTRACTION and the Listed Prix Matchem winner MATEMATICA, both of whom were also placed in Group 1 races.

GUERRIERE was knocked down to Araci, who was sitting next to his daughter Pinar and bloodstock advisor Rob Speers.

"We have bought three very nice well-related mares from young families," said Speers. "They are all in-foal to exciting stallions.

"They are all going to Old Mill Stud which Mr Araci has recently purchased. We are planning to put together a quality broodmare band." 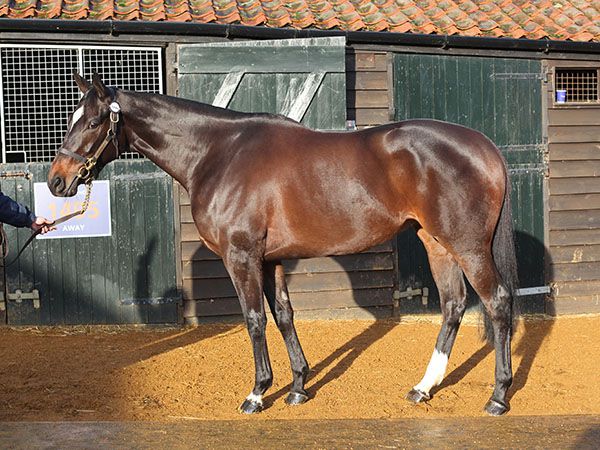 The SHAMARDAL mare SHAMBOLIC, who was placed in three Listed races and fourth in the Group 1 Fillies’ Mile, was purchased by Hadden Bloodstock for 800,000 guineas.

"This was the only mare we were interested in – she is a stakes-performing daughter of Shamardal and there will not be many of those available in future.

"Her purchase was a no brainer – she is a half-sister to two Group 1 winners, and she is a beautiful model. We have no plans as yet with regard to stallions, but she will be open to many options. Hopefully, we can continue with the pedigree."

SHAMBOLIC is a half-sister to the dual Grade 1 winner LAUGHING as well as the Champion Hong Kong older horse COMIC STRIP whose victories include the Group 1 Queen Elizabeth II Stakes.

She was sold by Highclere Stud on behalf of Floors Stud, the 10th Duke of Roxburghe having died in August.

His fifth child George was at Tattersalls to see the sale through.

"I am the only one of my father's children who is interested in racing – Dad gave a great sigh of relief when I developed my interest!" he smiled. "Mum was back at home listening on the phone – it is pretty special, Dad would have been very proud.

"Mum and I are going to carry on with 14 mares and run things on a little more commercial basis, though we will keep a few in training too. Ed Sackville will be helping us and he has been great, and John Warren and Lady Carolyn have been really helpful too."

The Tattersalls December Mares Sale continues at 9.30am on Wednesday 4th December with the draft from Juddmonte Farms set to be attract plenty of attention.