Rises Across the Board at Tattersalls February Sale

The Roger Charlton trained CREATIONIST was the top lot at 60,000 guineas on the second and final session of the Tattersalls February Sale which saw rises across the board and the third highest turnover in the sale’s history.

Creationist to be Work Companion for Romanised

The NOBLE MISSION four-year-old CREATIONIST was knocked down to Rupert Pritchard-Gordon for 60,000 guineas and is destined to join Ken Condon’s stable as a sparring partner for the stable star ROMANISED.

"He has been bought to go to Ireland and to Ken Condon's and though he will run as a dual-purpose horse he has been mainly bought to be a work companion for Romanised," said Rupert Pritchard-Gordon, racing manager for Romanised's owner Robert Ng.

"Creationist is a well-rated horse and looks as though he will do that job well," added Pritchard-Gordon, saying: "I am sure Ken will find a few options on the track for him, too."

CREATIONIST was offered by Roger Charlton’s Beckhampton House Stables with an official rating of 92. 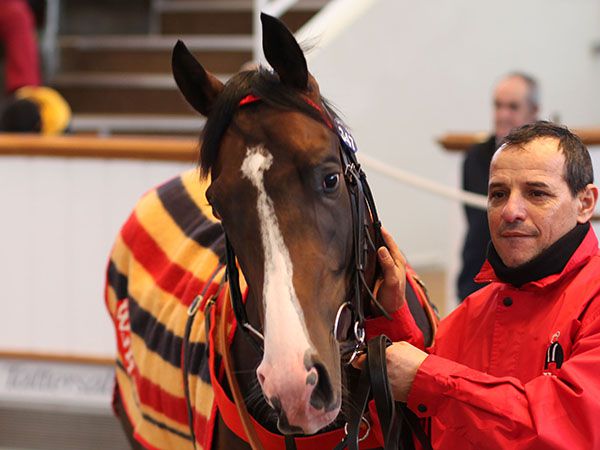 The GOLDEN HORN colt ST JUST is set to join Jedd O’Keeffe’s yard after being purchased for 55,000 Guineas by Quantum, the syndicate run by Jonathan Ramsden.

"I have watched this horse racing," said Ramsden, "and I think he is a nice type. We will probably geld him now and wait for a summer turf campaign. It will be interesting to see what sort of a trip he gets and how far he stays."

Consigned from William Haggas’ Somerville Lodge, ST JUST broke his maiden in a Nursery on New Year’s Eve and was offered with an official rating of 73. Quantum have 11 horses racing under their banner, all of which are in training with Jedd O’Keefe.

At the conclusion of the 2020 Tattersalls February Sale, Tattersalls Chairman Edmond Mahony commented;

“The first Tattersalls February Sale took place in the year 2000 and the sale is now a well established fixture in the European bloodstock sales calendar, regularly attracting an extraordinarily diverse international cast of buyers, similar to so many sales at Tattersalls. The February Sale’s ability to draw buyers from all corners of the world has been particularly evident over the past two days with buyers from around 30 different countries all contributing to robust trade from start to finish and a set of figures which compare favourably with last year’s February Sale.
“The average and median have both risen appreciably and the top price of 200,000 guineas for the Stakes winning filly I’LL HAVE ANOTHER comfortably surpassed last year’s top price at this fixture. The turnover has also risen despite a significantly smaller catalogue, and a clearance rate nudging 90% is another clear indication of the enduring appeal of sales of this nature at Tattersalls. As ever, the quality consignments from Godolphin, Juddmonte Farms and Shadwell have been well received and in addition to widespread participation from throughout Europe including Belgium, Cyprus, Denmark, Greece, Hungary, Spain, Sweden and Turkey, buyers from the Gulf region as well as Australia, Kazakhstan, Israel, Libya, South Africa and the USA have all made a significant contribution to a Tattersalls February Sale which has provided a positive start to the year."