The Clive Cox trained GET AHEAD became the 228th winner of a £20,000 Book 1 Bonus with an impressive debut victory at Ascot in the British Stallion Studs EBF Maiden Fillies' Stakes. The daughter of SHOWCASING collected a total of £26,426 for her owners Hot To Trot Racing V, with prize money of £6,426 supplemented by a £20,000 Book 1 Bonus. GET AHEAD is a full-sister to last year's Gr.2 Mill Reef Stakes winner ALKUMAIT and was bought at Book 1 of the Tattersalls October Yearling Sale for 200,000 guineas by Creighton Schwartz Bloodstock from the draft of Whitsbury Manor Stud. 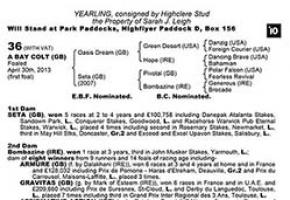