The DUBAWI colt out of MADONNA DELL’ORTO became the equal second highest priced foal ever sold in Europe when selling for 1,800,000 guineas to Anthony Stroud on behalf of Godolphin. Stroud, who was bidding to the podium from outside the sale ring, was taken to the seven-figure sum by Coolmore Stud’s MV Magnier who was stood in the bidders' area in the sale ring.

Genesis Green Stud’s Michael Swinburn was leaning on the rail just below the Coolmore team during the protracted bidding duel and was visibly emotional when the hammer finally came down. After shaking hands with the underbidder and the successful purchaser he explained just why the sale had such personal ties to Genesis Green and the Swinburn family;

"I just wish Walter was here to see this, he owned the mare and had her in training. I Can Fly was the last one he knew and he was absolutely over the moon. "She is a mare that I always thought would suit Dubawi, the shape of her. When I Can Fly came up I approached Liam O'Rourke at Darley and asked what was the chances of a foal share to Dubawi, and he said he would be delighted to have her. She is just a pure vessel of a mare, anything she has produced has been a good version of the stallion. She hasn't had any foal the same as the other one – she just throws to the stallion and throws a good version of him."

He added: "It is so hard to get one that is nice, to get it through x-rays, through scopes. I just hope he comes up lucky for Sheikh Mohammed. I have loved the stallion since his early days, I am happy for everyone at the farm, the lads are so loyal and it is a big effort."

Swinburn recounted the rocky start to the investment into the family;

"I bought the granddam Sabria at a September Sale here years ago with Oliver St Lawrence, I went home and went into the kitchen and Mum and Dad must have got wind of it that I had bought a mare - it caused an outcry! Walter bailed me out at 25,000 guineas and we have had the family ever since, it has been fantastic for us - it has probably built Genesis Green."

"I didn't think we'd have to go that far but he is a lovely horse, he is well bred and from a great farm. He is by Dubawi, who had such a wonderful Breeders' Cup, and the boss said go for it. Huge respect to the underbidders, and we are very lucky to have the horse. As long as he is a good racehorse, that is all that matters." 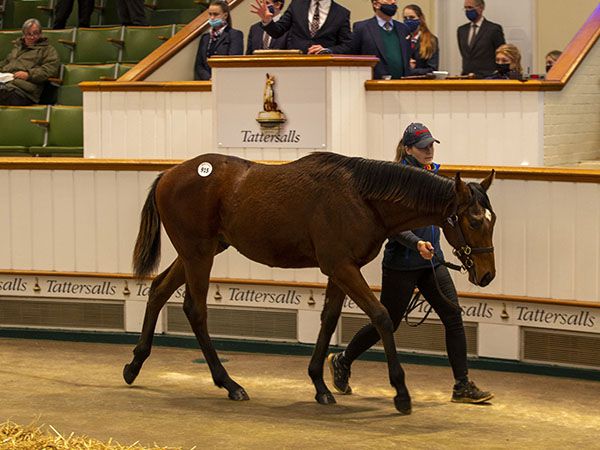 MV Magnier had earlier enjoyed better fortune when securing a colt by Champion sire elect FRANKEL for 675,000 guineas. It was a fantastic result for David and Trish Brown’s Furnace Mill Stud, who bred and consigned the colt and whose granddaughter Emily Brown led him up. BBA Ireland’s Michael Donohoe and Yeomanstown Stud’s Gay O’Callaghan were amongst the early bidders, with MV Magnier entering the fray at 400,000 guineas and eventually seeing off the persistent attentions of the Juddmonte Farms’ Simon Mockridge and Barry Mahon.

"He's a very nice horse who is very good looking and a brother to a good horse as well. David and Trish Brown are very good breeders, and we've known them a very long time so I'm delighted to be able to buy this horse from them. Sadly David couldn't be here today but hopefully he'll be happy with that result," said MV Magnier.

"It is fantastic, worth all the sleepless nights," smiled an emotional Trish Brown. "He has been brilliant all the way through, a lovely horse. It was lovely to see him making that money. We bought the mare here as a three-year-old, I think she is 16 now. She was 25,000 guineas from New England Stud and she has been a star.

"We bred Juan Elcano by Frankel and it was obvious to go back to him again, we felt the mare deserved a chance with him. We have her two-year-filly by Oasis Dream with us and she is in-foal to Sea The Moon. We have had three by Frankel, they have all had the most wonderful temperaments, wonderful horses to deal with."

David Brown, a former cricketer who played 26 Test matches for England between 1965 and 1969 before establishing Furnace Mill in 1976, was not at Tattersalls today and his wife explained:

"He has not been good on his legs of late and finds it difficult up here. He is holding the fort at home, I am sure he was watching – he can just about manage to operate the Tattersalls website!"

The highest priced filly on the day was Hascombe & Valiant Stud’s SEA THE STARS daughter of the Group 3 Tattersalls Musidora Stakes runner-up FRANKELLINA, who fetched 625,000 guineas to the bid of Blandford Bloodstock’s Tom Goff following a protracted bidding duel with BBA Ireland’s Patrick Cooper, seated with David and Vimy Aykroyd.

Goff was operating on behalf of Hascombe & Valiant Stud’s Anthony Oppenheimer, who revealed that he had bought out the foal share with Sunderland Holding. A daughter of FRANKEL, FRANKELLINA is a close relation to Group 2 Ribblesdale Stakes winner and Oaks third FRANKY DARLING from the exceptional Hascombe & Valiant family of Group 1 Coronation Stakes winner REBECCA SHARP and European Champion three-year-old GOLDEN HORN. 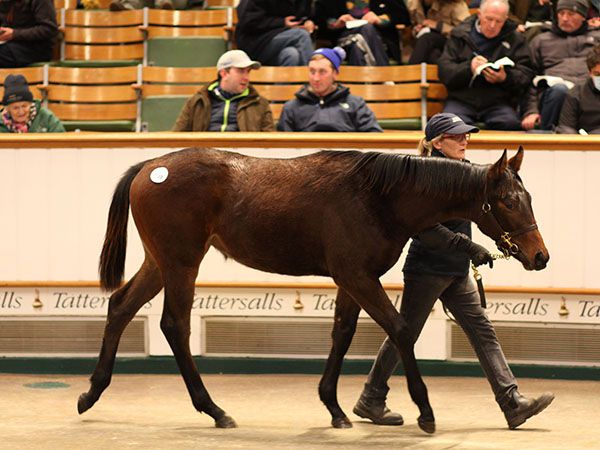 Another daughter of SEA THE STARS to catch the eye of purchasers was the filly out of the MONSUN mare SAHEL consigned by Harriet Loder’s Marwell Park, who was bought by Dr Andreas Jacobs of Gestut Fährhof for 350,000 guineas after seeing off the persistent attentions of underbidder Tom Goff.

SAHEL comes from one of the leading German families and is an own sister to Group 1 winners SCHIAPARELLI, SALVE REGINA and SAMUM and a half-sister to SANWA, the dam of the European Champion three-year-old and exciting young sire SEA THE MOON. She is already the dam of the Group 1 winner SORTILEGE and Group 3 winner SOUDANIA and is the granddam of Group 3 winner STAR SAFARI and the Listed winners AGROTERA and ANASIA.

Harriet Loder was delighted with the sale and explained how she came to buy Sahel;

"I went to buy this mare in France and she was withdrawn so I bought her privately, and she was not in-foal. I love German pedigrees and especially the German mares, they are tough and there is such a high standard of breeding, you can breed them to anything.

"I couldn't afford to send her to Sea The Stars so I am really thankful that they have offered me foal shares to him. I sold the full-sister last year to Etreham for 200,000 guineas, Andreas Jacobs did try for that filly and did not get her. So he came to see this filly and I am delighted he has got her, because you could not ask for a better home for a filly that you have bred." 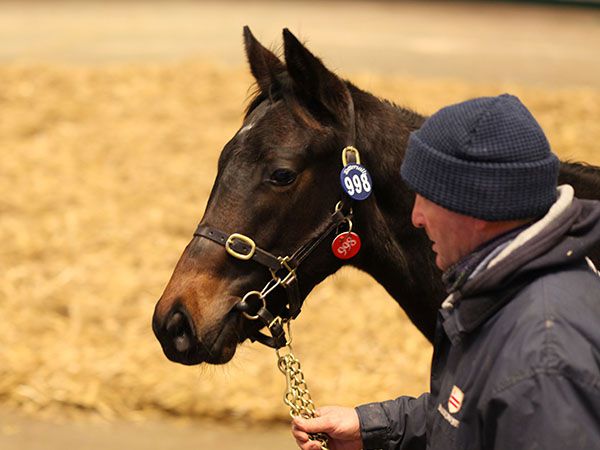 BBA Ireland’s Patrick Cooper, underbidder on Hascombe and Valiant Stud’s SEA THE STARS filly earlier in the evening, succeeded in purchasing another daughter of the leading sire ten lots later when striking at 350,000 guineas for Brightwalton Stud’s well-bred filly.

"She has been bought as a long-term breeding prospect and will eventually be going to trainer Ralph Beckett," explained Cooper. "We obviously missed the last one, but this one was coming along right behind – hopefully this one will be the fastest! The top end fillies are the Sea The Stars and the Frankels, so that is why we ended up bidding on two by the stallion. She is for David and Vimy Aykroyd and she will go from here to Copgrove Stud."

He explained why the couple were keen to buy a foal rather than a yearling as a racing prospect.

"If you buy a yearling the horse goes straight to the trainer or the breaking yard, so the owner never really gets to know the horse," said Cooper. "The Aykroyds live next door to Copgrove so they can spend a year getting to know the horse before she goes into training. They can get to know the individual and they will spoil her rotten!"

The filly is the first foal out of the KINGMAN mare INCHARGE, who was purchased for Brightwalton Stud by Stroud Coleman’s Matt Coleman for 200,000 guineas at Book 1 of the Tattersalls October Yearling Sale and ran once but was retired after injury. INCHARGE is a half-sister to the dual Group 1 winner and five-time Group 1 runner up POET’S WORD, to the Group 3 winner MALABAR and to the dam of Group 2 Railway Stakes winner BECKFORD. She was consigned today by Tom Blaine’s Barton Stud on behalf of her breeders.

The Tattersalls December Foal Sale continues with the fourth and final session at 10am on Saturday, 27th November.