The Tattersalls October Yearling Sale got off to a strong start on the opening day with the world's highest price for a yearling colt this year of 3,600,000 guineas and three lots topping the million guineas mark.

The DUBAWI half-brother to the Group 1 St James's Palace Stakes winner BARNEY ROY became the highest price given for a yearling colt anywhere in the world this year when selling for 3,600,000gns. The son of the GALILEO mare ALINA was knocked down to Anthony Stroud on behalf of Godolphin, with Sheikh Mohammed in attendance. The team had to fight off SackvilleDonald’s Alastair Donald initially and then MV Magnier before securing the colt consigned from Adrian and Philippa O’Brien’s Hazelwood Bloodstock.

"He is a really athletic horse, a really good mover," said Stroud.

"Sheikh Mohammed picked him out and was his favourite of today. Of course we stand the sire Dubawi and the colt is out of a Galileo mare.

"Night of Thunder is turning into a useful stallion and we also now have Too Darn Hot – the sireline is becoming very important and, of course, it traces back to Dubai Millennium, who was so important to Sheikh Mohammed.

"He cost more than we thought, but you need to go so far to get these sort of horses."

Adrian O'Brien of Hazelwood Bloodstock was lost for words.

"I am blown away," he smiled. "He is a beautiful horse and never missed a beat. It is an unbelievable figure and I am over the moon. I am so grateful to my clients for this quality of stock."

The colt was bred by Sun Bloodstock who purchased his dam ALINA via David O’Callaghan at the 2015 Tattersalls December Mare Sale for 65,000 guineas carrying BARNEY ROY.

"It is ideal, what you dream of, what you hope for," added O'Brien referencing the fact that the two biggest powerhouses in horseracing were in a head to head battle over his colt. "We knew we had an awful lot of interest in him, everyone who saw him liked him." 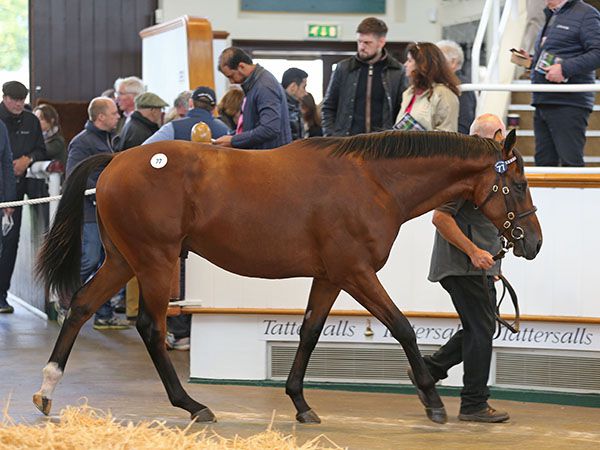 One of the pics of the catalogue on paper was lot 77, the DUBAWI colt out of the four-time Group 1 winning DANSILI mare THE FUGUE, offered by Lord & Lady Lloyd-Webber’s Watership Down Stud. The battle to secure the good looking colt settled down to a head-to-head between David Redvers and Badgers Bloodstock’s Grant Pritchard-Gordon with Redvers proving triumphant at 1,000,000 guineas.

"We are very excited to buy this colt," said Redvers, standing on the back wall with Sheikh Fahad. "Racehorse ownership is all about dreams, and he will give Sheikh Fahad and his brothers plenty to dream about over the next two years.

"He apparently is very different to his two full-siblings; he is a very strong colt and he vetted very well.

"Dubawi is an amazing sire and it is difficult to buy them – to have one out of such a mare as this is very exciting indeed.

"He will go to be broken in at Longholes and then will go into training with John Gosden early next year." 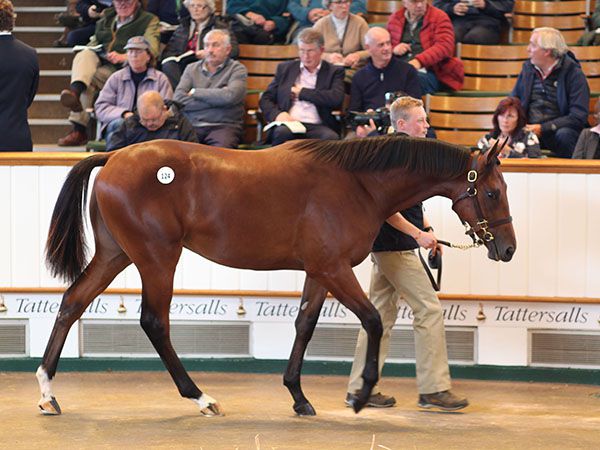 The final lot to sell for 1,000,000 guineas on the opening day was the DUBAWI colt out of the LEMON DROP KID mare WITHOUT YOU BABE. Consigned by Newsells Park Stud, the colt is a half-brother to the Grade 1 Breeders’ Cup Dirt Mile winner TAMARKUZ and the Group 1 St James’ Palace Stakes winner WITHOUT PAROLE.

Bred by John Gunther, the DUBAWI colt was knocked down to trainer Kevin Ryan on behalf of Sheikh Mohammed Obaid.

"Sheikh Mohammed Obaid loved the horse, and he knows more about the sire than anyone – he likes to pick horses that have similarities. He told me that if I liked him to buy him – it is wonderful to be able to buy horses such as this.

"The colt has a great pedigree, is a gorgeous horse by a fantastic sire."

Ryan has had horses for Obaid for the past season and said: "He is a lovely man to train for, very patient. He has been in the game a long time and seen the highs and the lows – there is no pressure from him. It is wonderful to have his support."

Book 1 of the Tattersalls October Yearling Sale continues at 11am on Wednesday, October 9th.