BEACH FROLIC, the dam of Cartier Champion PALACE PIER, was the star turn on the second day of the Tattersalls December Mares Sale, selling for 2,200,000 guineas to MV Magnier. Turnover fell just shy of 25 million during the session with seven lots selling for 500,000 guineas or more.

BEACH FROLIC, the dam of the Group 1 St James’s Palace Stakes and Group 1 Prix Jacques Le Marois winner PALACE PIER, looked the headline lot in the 2020 renewal of the Tattersalls December Mares Sale and she did not disappoint, selling to MV Magnier for 2,200,000 guineas.

Newsells Park Stud’s Julian Dollar kicked off bidding at 1,000,000 guineas with agents Alex Elliott and Rob Speers both joining in the battle to secure the daughter of NAYEF along with online bidders, but it was MV Magnier, standing outside, who prevailed.

"She is a lovely mare and she has already bred an exceptional racehorse, the yearling by Highland Reel that Jamie McCalmont bought is a very nice horse too," said Magnier. "She is a special mare; they don't come up very often. Palace Pier is a very special horse, an exceptional horse – she is a good producer. I would say that we will cover her with Galileo.

"It is incredible the involvement from Floors and it is great to hear that they are keeping some mares, let's hope they have plenty of success again. I would also just like to say what an amazing job Lady Carolyn Warren has done all the way through with this mare," added Magnier.

BEACH FROLIC was sold by part-owners Highclere Stud and Floors Farming and was offered in foal to Champion Sprinter BLUE POINT. She was consigned by Highclere Stud and Lady Carolyn Warren was quite emotional when chatting after the sale.

"I am not normally emotional, but she was such an amazing mare and it has been such a story and long journey, John bought her grandmother Miss d'Ouilly for only 50,000 guineas at the Tattersalls December Mares Sale in 2000. The family has just given us so much pleasure, we just hope for Coolmore and the team that she will do it for them, that she will produce them a champion, I am sure she will," said Lady Carolyn.

Of the decision to sell, the death of part-owner the Duke of Roxburghe of Floors Stud was influential.

"It was a little bit of coming to the end of an era, we have been so closely involved with Floors for 35 years," said John Warren. "This whole week has been really poignant, the wrapping up of most of it, but I am really pleased that the Duchess and her son George are carrying on with a few nice mares.

"We had a very close friendship, it is a bit beyond the horses," outlined Warren, with Lady Carolyn adding: "He and my father will be having a jolly good time of it up in the sky!"

Finally Warren credited the mare herself; "She is a magnificent mare, she stood up in her own right, she is a collectors' item in so many ways." The Listed winning and Group 1 placed four-year-old filly SONAIYLA attracted the attention of a multitude of bidders including agent Demi O’Byrne and trainer Joseph O’Brien but both were unable to match Fiona Craig who secured the DARK ANGEL filly for 900,000 guineas on behalf of Moyglare Stud.

"A case of reinvesting from the sale of Mia Maria earlier," smiled Craig, referring to the 450,000 guineas that Moyglare Stud’s four-year mare MIA MARIA sold for;

"It is basically a need for speed, that is why everybody else was bidding on her too. She has something that we find hard to breed, and there is that Group 1 placing. She is a pretty filly too, and she is an outcross, she can go to anything – I am so struggling with all our mares, aside from her own sire Dark Angel she can go to any of the top 15 stallions by stakes winners, which makes her invaluable.

"She can go to Galileo, Frankel, Dubawi, Kingman, Sea The Stars – she can go to all of those."

SONAIYLA won the Listed Sweet Mimosa Stakes for owners Ennistown Stud before finishing third to star sprinting mare GLASS SLIPPERS in the Group 1 Flying Five at the Curragh. She was consigned today by her trainer Paddy Twomey’s Athassel House Stud. 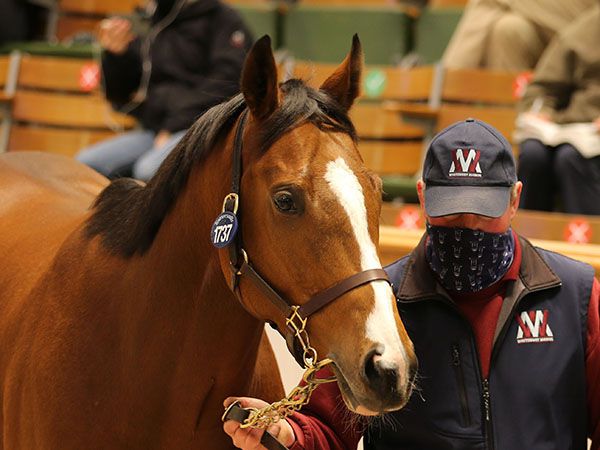 The Group 3 winning sprinter KURIOUS was another star attraction on the second day of the Tattersalls December Mares Sale and the half-sister to the Group 1 winners TANGERINE TREES and ALPHA DELPHINI was sold to Hillwood Bloodstock’s Charlie Vigors for 900,000 guineas.

Consigned to the sale by Whitsbury Manor Stud, the 106-rated four-year-old daughter of KUROSHIO out of the COZZENE mare EASY TO IMAGINE, won the Group 3 Coral Charge and Listed Scurry Stakes, both at Sandown Park.

"We are delighted to get her, she is a Group 3 and Listed winner out of a fantastic mare," said purchaser Vigors.

"When you take into account the stallions that Easy To Imagine has been to, like for like she has to be one of the best producers of recent times. No disrespect to the stallions she has been to, but the thing to stress, when you allow what she has been to, is that she is far outperforming. We are delighted to get her daughter Kurious and surprised that we have – we had to stretch a bit!"

Vigors continued: "She is for the same clients who sold the Lope De Vegas well at the Tattersalls October Yearling Sales. They are British based and have reinvested. We will see how the spring unfolds before we decided upon stallions."

The results that Vigors was referring to included the LOPE DE VEGA colt out of MOI MEME who realised 900,000 guineas at Book 1 of the Tattersalls October Yearling Sale. 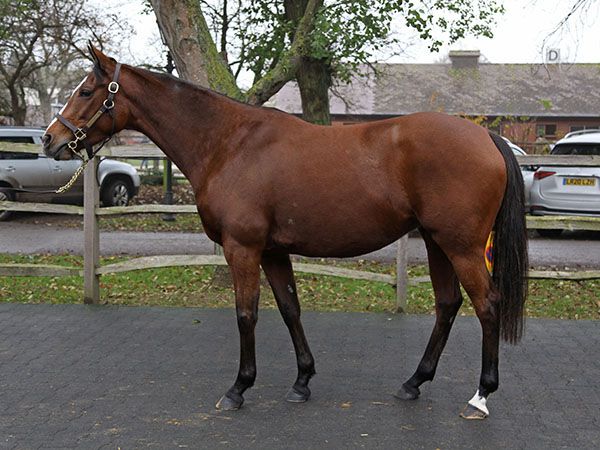 Early in the evening Blandford Bloodstock’s Richard Brown secured the beautifully bred FRANKEL filly TIME SAVER for 850,000 guineas. The daughter of the SADLER’S WELLS mare CLEPSYDRA is from a classic Juddmonte family and is a half-sister to the Group 1 winners TIMEPIECE and PASSAGE OF TIME. She was consigned to the sale by Genesis Green Stud and offered in foal to Juddmonte’s exciting young stallion KINGMAN.

"I didn't really think we'd get her!" laughed Brown. "We went a long way on her last year, we thought she was a stand-out from the Juddmonte draft last year. She has come back in-foal to a very exciting stallion.

"Mares such as this come on the market rarely. It is a phenomenal family – there was a Grade 1 winner in America the other day right down the bottom of the page, and Time Test is a young stallion I have got a lot of time for. It is a very active pedigree and I am delighted."

Brown was referring to VIADERA who won the Grade 1 Matriarch Stakes over the weekend, whilst the yearlings from the first crop of Group 2 winner TIME TEST, who is out of PASSAGE OF TIME, have been very well received at the yearling sales.

Brown added; "She has been bought for a partnership, and she will live at Fittocks Stud. We knew she was going to be hard to buy so we put a partnership together made up of some British-based owner-breeders."

The Tattersalls December Mares Sale continues at 9.30am on Wednesday 2nd December with the draft of fillies from Juddmonte Farms sure to attract plenty of attention.