The one-off Tattersalls March Sale, which was introduced in response to the COVID-related disruption to the Tattersalls February Sale, saw robust trade with BUGLE MAJOR topping proceedings at 90,000 guineas and a strong clearance rate of 89%.

The lightly raced BUGLE MAJOR, part of a three-lot consignment from Juddmonte Farms, topped the sale at 90,000 guineas when knocked down to trainer Richard Hughes. Formerly trained in France by Pascal Bary, the six-year-old BUGLE MAJOR has raced only eight times and was second on his most recent start at Chantilly to MAGNY COURS, who subsequently franked that form when finishing third in the Group 1 Dubai World Cup last weekend.

"I could have done without that happening!" laughed Hughes. "We had Bugle Major marked out some time ago and that added 20,000 guineas onto his purchase price! He is for existing owners who have put a syndicate together and wanted a Saturday horse. We were thinking about coming to the breeze-ups, but we found this horse. We said that if we were to buy a horse at the breeze-ups rated 100 it will cost an awful lot of money and you don't have any guarantee. This is a Saturday horse ready for the lads to have some fun with."

BUGLE MAJOR’s new trainer added; "He has had his issues, there is no doubt about it, but he is six now and all that hard work has been done for him. I had a good history of him from Juddmonte."

Of his age, Hughes said: "There are a lot of horses just lately as eight or nine-year-olds winning Group 1s, there is no stopping them – jump horses only come when they are seven! He has been minded to get him to here."

BUGLE MAJOR is a son of MIZZEN MAST out of the Group 1 Prix Marcel Boussac second CONFERENCE CALL. The Joseph Tuite-trained ATTRACTED is set to head to Saudi Arabia after being bought by Reda Al-Khalaf for 82,000 guineas. A winner on his only two starts this year, ATTRACTED was offered with a ‘Timeform’ rating of 95p following an impressive victory at Wolverhampton on his most recent start.

"Mr Al Turaif liked the fact that he is by New Approach and he a lightly raced four-year-old so there should be more to come. The name is good, too – Mr Al Turaif is attracted to Attracted!"

The four-year-old son of NEW APPROACH will ship immediately to Saudi, which is now in its close season with racing due to resume in six months.

Newmarket trainer Stuart Williams went to 60,000 guineas to secure the ‘Timeform’ 104-rated HURAIZ from the draft of Shadwell Estate Company. The four-year-old son of SEPOY is a two-time winner and was previously trained by Mark Johnston.

"He has been bought for Opulence Thoroughbreds, a syndicate that has four horses with me," said Williams. "They wanted a horse to have a bit of fun with on Saturdays and the bigger meetings and nice races – he fitted the profile.

"He is a nice horse, maybe a change of scenery might perk him up a bit. He has been running well and just not managed to get his head in front. He has had a month back at the barn since his last run, so we will crack on with him now."

Of the horse's history he added: "I spoke to Shadwell and they told me about the horse – they are pretty good like that, they tell you everything they know. They always have a few issues these types of horses, but at least you know beforehand." 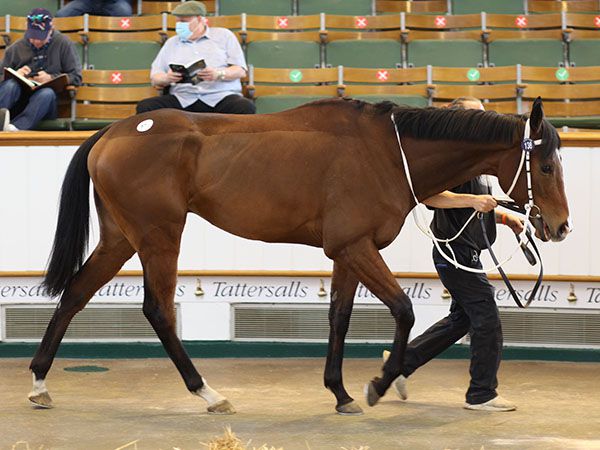 The Jane Chapple-Hyam trained SUN POWER was purchased by Harraton Court Stables’ Darryll Holland, the former jockey having started training recently. The four-year-old gelding by NIGHT OF THUNDER is rated 96 by ‘Timeform’ and was knocked down to Holland for 45,000 guineas.

"He got beat just a couple of yards at Royal Ascot and was unlucky not to win then – we are very pleased with him," said Holland. "He is for owners in the yard, and hopefully we will send him to Dubai for a race out there."

Holland added: "I will have a word with Jane and get a run down, he has obviously been well looked after and has good recent form, he won in December."

Of his new training venture, Holland said: "All is going well at the moment, we are really pleased. The plans is to be back up here in a couple of weeks as we have orders for the breeze-up sales."

SUN POWER was bought by Al Sharq Racing at the 2020 Tattersalls Autumn Horses in Training Sale for just 10,000 guineas.

At the conclusion of the Tattersalls March Sale, Tattersalls Chairman Edmond Mahony commented;

"The Tattersalls March Sale was added to our 2021 sales calendar in response to the COVID-related disruption to the February Sale and it has generated solid international trade with a good crowd in attendance as well as the now customary prolific amount of live internet bidding. It has been great to have been able to host a live sale again at Park Paddocks and we are looking forward to welcoming registered participants to both the Tattersalls Craven and Guineas Breeze Up Sales in the coming weeks, both of which will be conducted with similar COVID protocols in place."

The next sale at Tattersalls is the Craven Breeze Up Sale, which takes place on April 12–14. Catalogues are online now and available from Tattersalls and Tattersalls representatives.