The Tattersalls Craven Breeze Up Sale continued in robust fashion during the second and final session with a son of CARAVAGGIO lighting up the sale ring when selling for 240,000 guineas. The clearance rate remained a feature of the sale, finishing on 88% whilst the turnover of 10,408,500 guineas was the fourth highest for the sale since 2008.

SackvilleDonald’s Alastair Donald secured the attractive colt by first-season sire CARAVAGGIO for 240,000 guineas after seeing off the efforts of Irish trainer Michael O’Callaghan. The son of the GALILEO mare BRIGHT SAPPHIRE is a half-brother to the Group-placed colt WALL OF FIRE.

"He is for a new Hong Kong client, he will go out to Hong Kong at the end of the season," revealed Donald. "He will be pre-trained in England, he is a lovely big horse and he has a nice pedigree. He breezed well for a big horse and looks the type to do well in Hong Kong."

Donald added: "They don't race until they are three-year-olds, so don't want a 'here and now' horse. The sire looks like he has got a very nice two-year-old already and this is the first I have bought by the sire, I did like the yearlings - they are particularly good walkers, and this horse's movement is very good."

The colt was sold by Yeomanstown Stud, who bought the colt at the Tattersalls December Foal Sale for 155,000 guineas. Yeomanstown Stud’s David O’Callaghan commented;   "He is a beautiful colt, he breezed really well and has a great attitude. We’re very pleased, he was always a lovely horse and he hasn't missed a day." 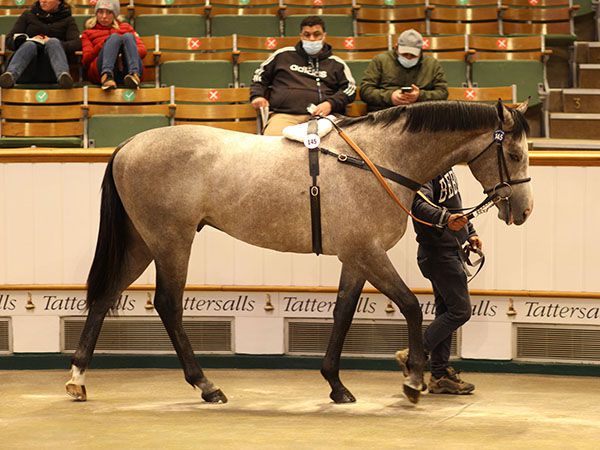 Kuwaiti buyer Sheikh Abdullah Almalek Alsabah bought the second highest priced lot for the day when going to 185,000 guineas to secure the UNION RAGS colt out of CARELESS JEWEL. Named TATTERED FLAG, the February born colt was bought last September by Tom Whitehead of Powerstown Stud for $115,000 and was part of a three-horse draft that included lot 90, a colt by the fellow US-based sire PRACTICAL JOKE. He made 140,000 guineas and was bought by trainer Michael O’Callaghan.

"I am very pleased," said Whitehead. "They are two nice horses, and the Union Rags will be a lovely horse later in the year."

Whitehead's 2020 buying mission took place during the real depths of the COVID pandemic with travel restrictions and problems, but he is now obviously delighted that he managed to make the journey stateside;

"It was touch and go whether we'd get to the US last year. That has been a great start, but we are only halfway there – we've another seven or eight to sell!" 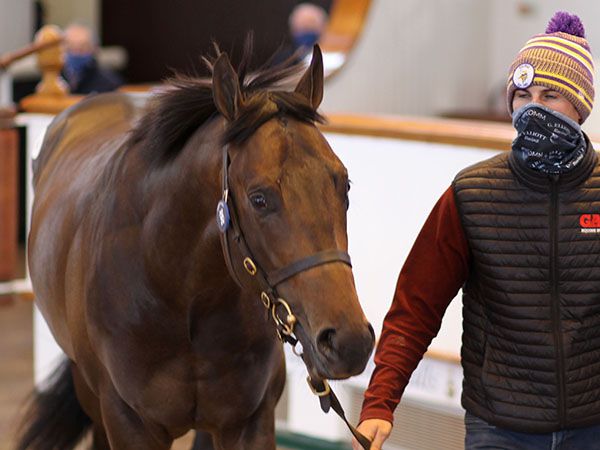 "He is for Opulence Thoroughbreds, whom I bought a few for at the last Tattersalls sale," said Williams. "This colt is not certain to come to me as I help with the buying. He is a good strong horse and athletic, and we liked the way he breezed. He looks like he will be able to run as a two-year-old - unfortunately you have to pay for this type of horse!

"But if he was by a proven sire such as Night Of Thunder we would not have been able to buy him. Aclaim was a very good racehorse himself, and a good two-year-old."

Tally-Ho Stud finished the Craven Breeze Up Sale as the leading consignor, selling eight lots for a total of 1,080,000 guineas. 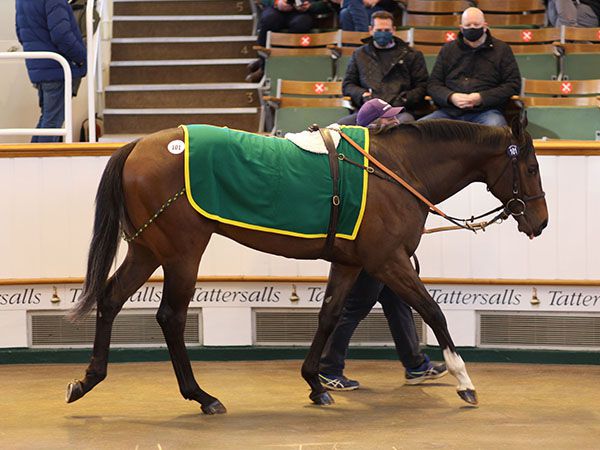 Agent Stephen Hillen added to his three purchases yesterday when going to 150,000 guineas to secure the SHOWCASING colt from Katie Walsh's Greenhills Farm. The March-born colt is the first foal out of the HELLVELYN mare SWIRRAL EDGE, a half-sister to the Listed winner FASHION QUEEN from the fast family of the Group 2 Flying Childers Stakes and Group 3 Molecomb Stakes winner WUNDERS DREAM. He was bought as a yearling at the Tattersalls December Yearling Sale for 65,000 guineas.

At the conclusion of the 2021 Tattersalls Craven Breeze Up Sale, Tattersalls Chairman Edmond Mahony commented;

“We introduced the £250,000 Craven Royal Ascot/Group 1 Bonus this year, in addition to the lucrative £15,000 Craven Breeze Up Bonus and it is clear that owners have embraced these unprecedented bonuses. We have seen solid and diverse demand at all levels of the market from start to finish which has produced the best Craven Breeze Up clearance rate since 2000 and key indicators which have held up well, especially when taken in the context of the COVID - related challenges and restrictions which we are all still grappling with and which continue to hinder international travel.

“Nevertheless, to hear consistently positive feedback from owners, trainers, agents and consignors about the bonuses has been gratifying, and reinforces our commitment to exploring as many innovative ways as possible to reward owners who buy at Tattersalls with extra prize money. There is no doubt that we will see plenty of this crop of Craven Breeze Up graduates performing at a high level and it would be even more pleasing than usual if the Royal Ascot and Group 1 bonuses were won in the coming months.

“Despite the prolonged difficulties with international travel, overseas buyers have again demonstrated their appetite for high class Tattersalls breeze up two year olds. Buyers from America, Bahrain, Dubai, France, Italy, Qatar, Saudi Arabia and Singapore have all been active, many of them using the live internet bidding platform, and as well as paying tribute to the consignors who have as ever presented an outstanding collection of two year olds, we must again commend everyone for their patience with the regulations and determination to overcome the obstacles we continue to face. We are still having to conduct sales under strict guidelines, but as well as looking forward to the forthcoming Guineas Breeze Up and Horses in Training Sale, we are also looking forward to returning to more normality in the not too distant future."

The next chance to buy a ‘breezer’ at Tattersalls is at the Guineas Breeze Up & Horses in Training Sale which takes place from 28th - 30th April, with all lots breezing on the Rowley Mile at 9am on Wednesday 28th April before the sale on Friday 30th April.