Book 1 of the Tattersalls October Yearling Sale continued in solid fashion on the second day with Godolphin buying the top four priced lots.

Demand for yearlings by the superstar stallion DUBAWI continued unabated on the second day of Book 1 of the Tattersalls October Yearling Sale and leading the way was his son of the Group 1 Moyglare Stud Stakes winner INTRICATELY at 1,100,000 guineas.

The Highclere Stud consigned colt’s dam INTRICATELY was purchased at the Tattersalls December Mare Sale in 2017 for 1,700,000 guineas by John & Jake Warren on behalf of Mike and Michelle Morris. The DUBAWI colt on offer today was her first foal and was knocked down to Anthony Stroud on behalf of Godolphin after he saw off a determined effort by trainer Kevin Ryan.

"It is very exciting, I am absolutely thrilled for the Morris's, they stepped up and bought a fantastic mare and she has really repaid them today. He is a gorgeous colt and has been since the day he was born, he has the most fantastic temperament," said consignor Lady Carolyn Warren of Highclere Stud. "I am thrilled for the breeders and everyone."

Her son Jake Warren, who selected the mare in 2017 with his father John, added: "It is a real group affair, a lot of team-work is involved in this. Mike and Michelle bought the mare, she is a beautiful quality mare. She has a stallion in her pedigree, she was a Group 1 two-year-old winner, she is by one of the best stallions in the world, and she is an outstanding looker. She had everything as a broodmare, which is why we stepped up to buy her then. And she has done nothing but please us since. It is testament to that, and to the efforts by stud manager Rachel Spindlow and the staff at Highclere.

"It was the intention through this process to be playing at this end of the table and thank you very much to Anthony Stroud for buying him. I want to say thank you to him and the underbidder – he is a fantastic horse, and it was wonderful that two people valued him to such a level.

"He really was as good a first foal as you would wish to see," said Warren, adding: "She has got a colt foal who is equally as good who might be coming back here next year, and she is in-foal to Kingman. Down the line some of the progeny might be kept to race, but the mare owes a few quid so she needs to clear the balance sheet first! And she needs to produce a filly!" 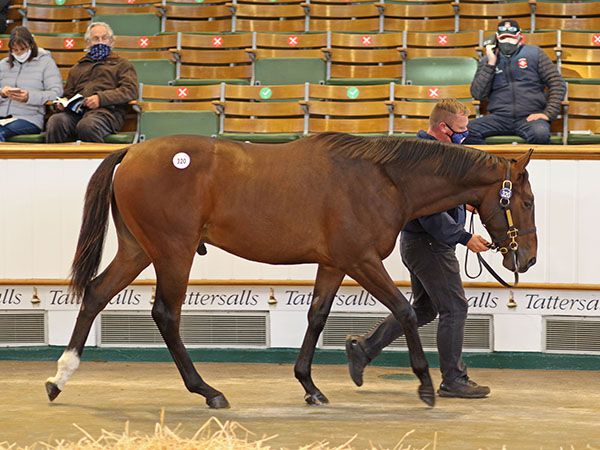 Charlie and Tracy Vigors' Hillwood Stud were celebrating after their LOPE DE VEGA colt out of the TEOFILO mare MOI MEME sold for 900,000 guineas to the bid of Anthony Stroud on behalf of Godolphin after he saw off underbidder David Redvers.

"It is beyond our wildest dreams to get a result like that!" smiled a visibly emotional Charlie Vigors.

"We put what we thought was a sensible reserve on him as we knew we had lots of interest in him, and you could see from the live bids around the ring that there were plenty of people on him. There were plenty in up to 400,000 guineas to 500,000 guineas and we were hoping to fetch in that range. That is the beauty of public auction, isn't it, when two people then lock on."

The son of the Listed winning mare MOI MEME had received a significant catalogue update when his two-year-old own-brother KING VEGA finished second in the Group 2 Solario Stakes in August.

"I think the plan is to run him in the Pertemps Futurity, if the ground is ok," said Vigors. "I know Andrew [trainer Andrew Balding] thinks very highly of him. He has got his black-type, if he could be a Group 1 winner it would be even better!"

Dam MOI MEME is certainly enjoying something of a lengthy love affair with the Ballylinch Stud stallion LOPE DE VEGA – all her four foals are by the son of SHAMARDAL.

"The mare has a lovely Lope de Vega filly on the ground and she is back in-foal to him again," said Vigors. "She has been married to him because the first ones were so nice! I don't think there is a much better sire to be married to at the moment – he is one of the top young sires around. We picked him out as a sire 'on the up' a few years ago and these were bred off a €60,000 nomination, and he has gone up to €100,000 now. You need pay days like this to keep going back to him!"

This colt was bred by a Hillwood Stud-managed syndicate called Fortescue Bloodstock, and Vigors explained: "The syndicate has been buying high dollar mares, and it is bunch of investors, mainly London based. They enjoy it very much and will certainly enjoy a day like today! There are three mares in the syndicate, with some more in another group – there are about seven or eight mares across two groups." 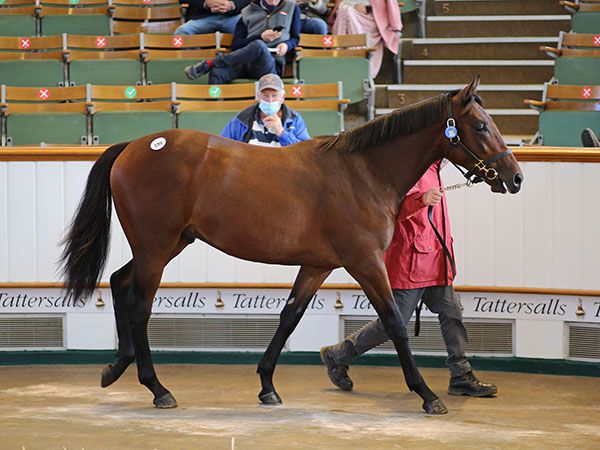 Nicholas Jones’ Coln Valley Stud continues to reap the rewards of the purchase of the SHIRLEY HEIGHTS mare GRYADA with the sale of the DUBAWI colt out of her daughter GREAT AND SMALL for 800,000 guineas to Anthony Stroud on behalf of Godolphin.

Jones purchased GRYADA for 160,000 guineas via bloodstock agent Richard Frisby at the 2005 Tattersalls December Mares Sale and was rewarded soon after with her resulting foal being the multiple Group 1 winner FAME AND GLORY. GRYADA also produced three fillies who were retained by the stud including GRACE AND FAVOUR, dam of the KINGMAN colt who realised 2,300,000 guineas at last year’s October Book 1 Sale and GRACE AND GLORY, dam of a SHOWCASING colt who realised 600,000 guineas at this sale the year before.

"I am delighted, it is a nerve-wracking game this – in that three minutes is the only revenue for the stud in 365 days, that's the one time we only have cash in rather than cash out!" smiled Jones.  He added: "The foals out of Grace and Favour and Grace And Glory have sold very well. The family is doing exceptionally well. It's nice that all three daughters have produced lovely colts to bring up here. I like to keep the fillies – and I can afford to keep them now!"

Of GREAT AND SMALL’s latest news, Jones updated with a cheeky smile:

"There is a full-brother foal and I said today to Antony Stroud, 'I hope to see him here again next year!' She is in-foal to Bated Breath."

Jones also gave his thoughts on the wonderful mare GRYADA, who started all this off for the farm. "She died a few years back, she was quite old when I bought her, but she produced three lovely fillies for me. She was bred by Lord Howard de Walden and was a wonderful broodmare."

Jones enjoys his stud farm and breeding his horses, but selling them does come with its stresses. "I love it, but I do lose a stone in weight coming up here – my wife would say that is a good thing! We have a small stud and try and keep it small and have the best mares we can afford."

The Tattersalls October Yearling Sale, Book 1 continues at 11am on Thursday 8th October with the third and final session.