Book 1 of the Tattersalls October Yearling Sale got off to a strong start at Park Paddocks in Newmarket with a trio of yearlings by DUBAWI selling for a million guineas or more and increases in turnover, average and median.

Leading the way on the opening day of Europe’s premier yearling sale was the DUBAWI half-brother to the Listed-placed VOICE OF ANGELS who was knocked down to Anthony Stroud for 1,500,000 guineas. Buying on behalf of Sheikh Mohammed’s Godolphin operation, Stroud secured the colt after he saw off the efforts of leading Japanese trainer Mitsu Nakauchida.

Consigned by Adrian and Philippa O’Brien’s Hazelwood Bloodstock, the regally bred colt is out of the GALILEO mare RING THE BELL, a sister to dual Group 1 winner HYDRANGEA, the English and Irish 1,000 Guineas winner HERMOSA and Group 1 winner THE UNITED STATES. He was bred by John Camilleri’s Fairway Thoroughbreds.

“He’s by Dubawi and comes from an excellent farm,” said Anthony Stroud. “It’s a cross that works and it’s a wonderful family. The boss is here and he’s choosing these horses. He’s just a wonderful specimen of a thoroughbred really.”

DUBAWI, who has had a remarkable 39 individual Group/Listed winner this year to date, was the leading sire on the opening day of the October Book 1 Sale, with his seven yearlings realising a total of 5,400,000 guineas. 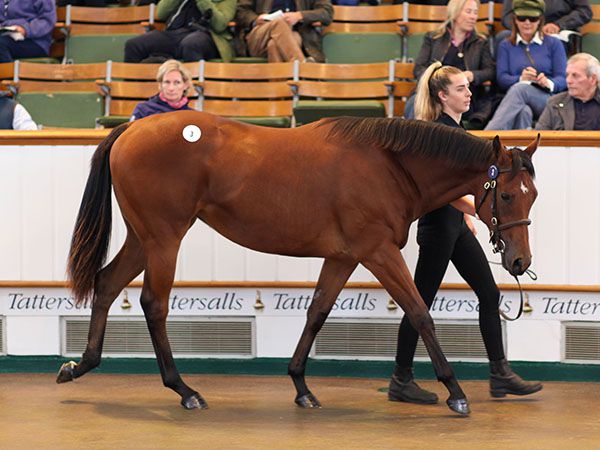 The fireworks began early in the day when lot 3, the DUBAWI filly out of the Group 2 Prix de la Nonette winner and Group 1 Prix de l’Opera second JAZZI TOP, who hails from the great Meon Valley Stud family of COLORSPIN, sold for 1,300,000 guineas. Charlie Gordon-Watson was amongst the bidders to set the early pace and Moyglare Stud’s Fiona Craig soon joined the fray, before the pair were usurped by agent Anthony Stroud on behalf of Godolphin.

The DANEHILL DANCER mare JAZZI TOP is herself the daughter of the Group 1 Prix de l’Opera winner ZEE ZEE TOP and a half-sister to the dual Group 1 winner IZZI TOP, and the filly today was consigned by her breeder Meon Valley Stud.

"It's a good way to start the sale," remarked Anthony Stroud. "She is a very attractive filly from a very good farm and there is nothing more to be written about Dubawi is there? The boss picked her out and he has had a lot of success with the family going back to Opera House and Kayf Tara."

Those Group 1 winning full-brothers by Sadler's Wells carried Sheikh Mohammed's maroon and white silks with distinction in the 1990s, winning races such as the Group 1 King George VI & Queen Elizabeth Stakes and the Group 1 Gold Cup. 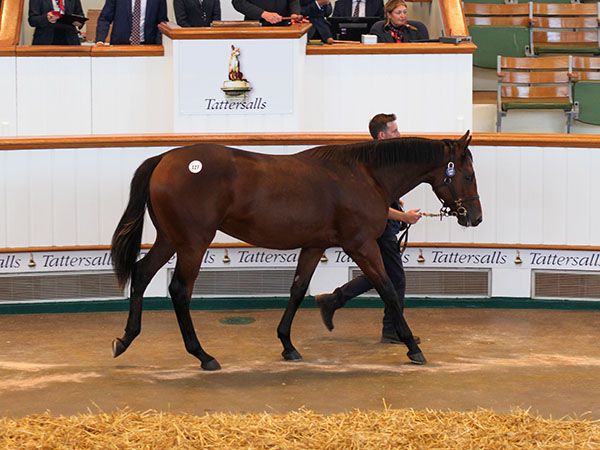 A third yearling by the remarkable sire DUBAWI topped the million guineas mark during the opening session when Cheveley Park Stud’s colt out of the Group 1 Queen Elizabeth II Stakes winner PERSUASIVE realised 1,000,000 guineas to the bid of Anthony Stroud on behalf of Godolphin.

"He is a very nice horse and Cheveley Park Stud do a fantastic job. He is out of a very good mare and by Dubawi, so there's a lot to like. He will go back to Moulton Paddocks," Stroud commented.

It's a family that trainer Charlie Appleby knows very well as the colt is a close relation to last season's Group 1 British Champions Sprint winner CREATIVE FORCE by DUBAWI.  "He is about twice the size of Creative Force," remarked Stroud in answer to queries about similarities between the two. "But if his heart is half as big as Creative Force's then we will be very happy."

DUBAWI, who has had a remarkable 39 individual Group/Listed winner this year to date, was the leading sire on the opening day of the October Book 1 Sale, with his seven yearlings realising a total of 5,400,000 guineas. 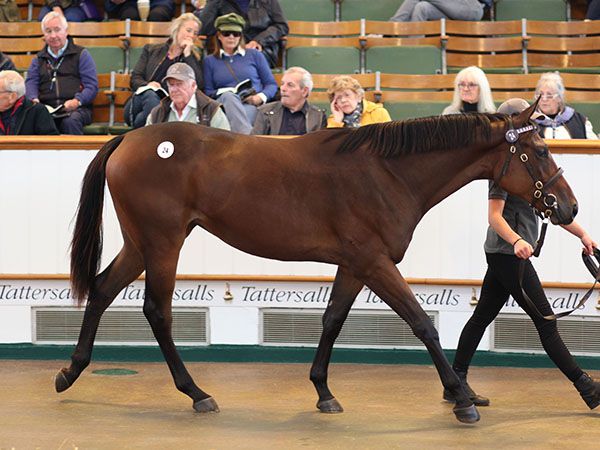 Well-bred fillies were in great demand throughout the day and one to attract the interest of buyers was the SIYOUNI daughter of Group 2 Middleton Stakes winner and St Leger second LAH TI DAR. Hubie de Burgh, stood alongside Australian breeder John Camilleri and Al Shira’aa Farms’ Kieran Lalor both made bold bids to secure the regally bred filly, but it was Angus Gold who prevailed on behalf of Sheikha Hissa’s Shadwell Stud at 880,000 guineas.

Angus Gold explained that Sheikha Hissa is looking to add high class fillies to the Shadwell broodmare band and they don't come with a better pedigree than the SIYOUNI filly.

"Sheikha Hissa is very excited to have bought a filly with such an outstanding pedigree. There are an awful lot of Group 1 horses under the second and third dams, and this is a beautiful filly who has been excellently nurtured by the Watership Down team. We are hoping to buy fillies with pedigrees for the future and this is one of the strongest pedigrees in the catalogue."

Sheikha Hissa, who has been in attendance at Tattersalls, was buying for the first time at the sale, an experience the Shadwell principal has enjoyed.

"Everyone has been so welcoming and kind to Sheikha Hissa, it's been really enjoyable for her," Gold added.

Consigned by Lord & Lady Lloyd-Webber’s Watership Down Stud, the filly’s dam LAH TI DAR is by DUBAWI and is a full-sister to the European Champion two-year-old TOO DARN HOT, out of the three-time Group 1 winning mare DAR RE MI.

Watership Down Stud’s manager Simon Marsh was thrilled that Sheikha Hissa's first purchase at Book 1 was the farm's homebred filly:

"We are delighted with the price and feel it is an excellent one. She is a very nice filly and we have an enormous amount of the family to breed from on the farm. We are thrilled that Angus Gold, Shadwell and Sheikha Hissa have purchased her. She is a fantastic filly for anyone breeding and we are incredibly lucky to have been breeding from this fantastic family for 25 years. We wish Sheikha Hissa the very best of luck with her."

Book 1 of the Tattersalls October Yearling Sale continues at 11am on Wednesday, 5th October.