Eleven lots sold for 100,000 guineas or more during a strong second session of the Tattersalls December Foal Sale. A colt by top class stallion SEA THE STARS topped the session at 170,000 guineas, with the progeny of first season stallions SAXON WARRIOR and HAVANA GREY also featuring amongst the top lots.

Gerard Lowry’s Oneliner Stables secured the top priced lot of the day when landing the SEA THE STARS colt out of the DUBAWI mare LA MORTOLA for 170,000 guineas.

"He is a Sea the Stars colt out of a Dubawi mare, he has it on both sides and he comes from an outstanding family - two champion horses in the second dam. He has great movement, he is a lovely individual. He was our pick of the day so we are delighted to get him," explained Lowry.

"All going well, and with a bit of luck, he will come back to Book 1 next year and he will do us proud. We have had luck before with Sea The Stars so it is going back to the well! It is a big plus too that he has come out of Newsells – the farm is such a noted breeder and consignor. He has come off a great farm, and they have done a fantastic job with him."

Sea The Stars has been lucky for Oneliner before – in 2019 the family pinhooking business sold a colt by the sire out of EMRELIYA to Godolphin for 725,000 guineas. Lowry explained that when a pinhooker has had luck with a sire, how much more likely he or she is to head back to buy one by the same stallion again;

"You understand the stallion's stock and what his record is on the racecourse, you are watching the stock and know what they have coming up. It is a massive help and if the stallion has been lucky for you, it is hard to go away from it. It was a big factor with this, the second big factor was being out of a Dubawi mare and with a grand-dam by Barathea so you are getting Sadler's Wells over Urban Sea. It stacked up on a lot of fronts."

LA MORTOLA is out of the BARATHEA mare CLABA DI SAN JORE, dam of the globetrotting Group 1 winner JAKKALBERRY as well as the Italian Derby winners CRACKERJACK KING and AWELMARDUK.

Consignor Julian Dollar said: "The colt was bred by Mr Graham Smith-Bernal, he bought the mare with Jill Lamb a couple of years ago from Kiltinan. He is a very nice man and is new to the industry. He plans to race a few and is wanting to breed as well and has a few mares boarding with us." 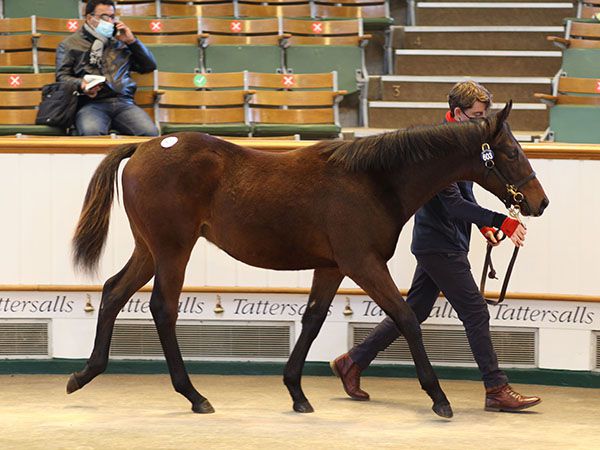 A colt from the first crop of 2,000 Guineas winner SAXON WARRIOR provided another highlight on the second day of the Tattersalls December Foal Sale, selling for 160,000 guineas to Timmy Hyde’s Camas Park Stud.

Hyde commented: "Saxon Warrior was a hell of a racehorse; he was one of the best racehorses for many many years. This colt is a lovely individual and will come back for resale next year."

The colt is out of the stakes winning CANFORD CLIFFS mare AKTORIA, winner of the Listed Prix Six Perfections and from the extended family of Champion two-year-olds TROMOS and TOLMI and the Irish Derby winner TYRNAVOS.

The colt was offered by Highclere Stud, and Lady Carolyn Warren said: "I am absolutely delighted for the breeders Leonidas and Marina Marinopoulos and their partners. What a wonderful example of how lovely Saxon Warrior's stock are, he is a real credit to his sire. He is a gorgeous horse with a great temperament, he was very popular in the yard. I am delighted for everybody."

She continued: "He came to us to prep, we do a lot with Leonidas and Marina – our mares stay with them when they are over for French stallions and we sell yearlings for them too. They are tremendous breeders, they been in the game for a very long time and they are lovely people." 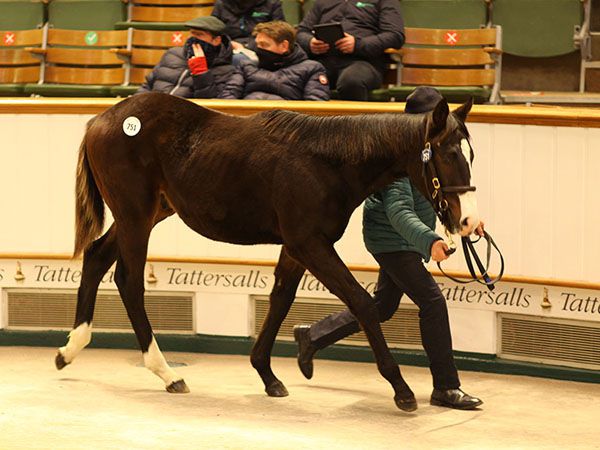 Oneliner Stables struck again to secure the CAMELOT colt out of the OASIS DREAM mare DELTA DREAMER for 140,000 guineas. The colt, who hails from the family of DANCING BRAVE, was consigned by Belmont Stud.

Oneliner's Gerard Lowry said: "Sir Dragonet won the Cox Plate and he is out of an Oasis Dream mare – Oasis Dream is a champion broodmare sire and the cross works. This foal comes from an outstanding Juddmonte family, that of Dancing Brave, he ticked a lot of boxes and was pretty obvious really. He is a good individual as well, so it makes a lot of sense. Also there is the Australian factor coming into Book 1 now, and Camelot is a worldwide stallion."

Coolmore Stud’s 2,000 Guineas and Derby winner CAMELOT has enjoyed a spectacular year on the racecourse in 2020, with four individual Group 1 winners including the Irish Oaks winner EVEN SO, the Cox Plate winner SIR DRAGONET and budding Australian star RUSSIAN CAMELOT.

DELTA DREAMER was purchased at the 2017 Tattersalls February Sale by Glenville Bloodstock for 40,000 guineas.

The Japanese based Paca Paca Farm secured the HAVANA GREY half-brother to Group 3 Cornwallis Stakes winner GOOD VIBES for 130,000 guineas. The son of the COMPTON PLACE mare SATSUMA was consigned by Ed Harper’s Whitsbury Manor Stud, who stand the Group 1 winning son of HAVANA GOLD who is represented by his first crop of foals this year.

"It is amazing, somebody from Japan wants to buy stock from the new stallion we stand! It is amazing," said an emotional Harper following the sale. "I loved the foal, I have just stared at him ever since he was born. It is fantastic, there is a slight tinge of sadness that I am not going to watch him race here but I can't complain at the price.

"These Havana Greys have gone so well, it is just fantastic. Good Vibes was great for the mare, and Orange Blossom was also very good as well, although she did not get blacktype.

"But people have really appreciated these Havana Greys, everybody has come to look at them, which is a test in itself, everybody has opened the doors to see them. They are going to good homes as well, so I am really really pleased. But I never thought he'd make that. I thought there might be an outside chance of making six figures on a good day, I never thought we would get that."

Harper added: "I knew a lot of the really good judges were on him, regular clients of mine whose support I really appreciate. I try and build up a good relationship with the pinhookers – I just did not think they wouldn't be getting him. I am thrilled, thank you to Harry Sweeney."

The Tattersalls December Foal Sale continues at 10am on Friday 27th December.