A million guineas KINGMAN filly proved the highlight of an extraordinary day of trade at the Tattersalls December Foal Sale with fourteen lots selling for 300,000 guineas or more, compared to eight in the equivalent session in 2021. The average and median saw increases of 19% and 13% respectively, and turnover for the Tattersalls December Foal Sale has already exceeded last year’s total with a fourth and final session still to come.

The star turn on the third day of the Tattersalls December Foal Sale was Whitsbury Manor Stud’s KINGMAN half-sister to CHALDEAN who was sold at the 2020 renewal of the sale and won the Group 1 Dewhurst Stakes this year. She duly did not disappoint, becoming only the sixth lot ever to make a million guineas at the Tattersalls December Foal Sale when knocked down to Juddmonte Farms.

Juddmonte Farms’ Simon Mockridge had struck the successful bid of 550,000 guineas for CHALDEAN two years previously and was not to be denied for his half-sister, seeing off the attentions of Philipp von Stauffenberg, bloodstock agent Michael Donohoe, seated alongside Yuesheng Zhang to the left of the rostrum, an online bidder and eventual underbidder David Redvers to secure the filly.

Mockridge commented: "We are delighted. It is always going to be expensive buying a filly like that when you've got a new Group 1 winner on the page. Chaldean is very exciting, we were delighted to buy him from Whitsbury a couple of years back and the Harpers do a great job. I am very happy for Ed Harper and his team.

"The family want to reinvest in pedigrees, this is a very strong page, and with Chaldean who knows what is going to happen next year? This filly could be a very valuable prospect going forwards."

When asked if the two were comparable Mockridge said: "Chaldean was a slightly smaller horse, she is bigger, she has a big backside on her. She looks faster, if you can say that, but she is an exciting filly. Kingman has had such a good season; two Group 1 winners and 14 individual Group winners, he is going from strength to strength."

The March-born filly was bred and sold by Whitsbury Manor Stud, whose principal Chris Harper had bought her dam SUELITA at the Tattersalls December Mares Sale for 21,500 guineas in 2013. The daughter of DUTCH ART has repaid that investment in spades, producing six winners from six runners with Group 2 Mill Reef Stakes winner ALKUMAIT and three further blacktype performers in addition to the Group 1 winning CHALDEAN.

Consignor Ed Harper said: "What has it been, two months since the Dewhurst? It feels like a long long two months! Thank goodness we had her entered here, I could not have hung on another year waiting to sell her. Every time someone dropped a spanner at home, you fear.

"It is lovely to get a big round figure like that. It is fantastic and we really appreciate Juddmonte's support. The farm supported us by buying Chaldean and have done it again. Hopefully she can repay that faith and be a bit of sport on the racetrack before going to Frankel in a couple of years' time. She is nailed on to be a broodmare for Frankel, with luck she is the perfect sort of mare for him - hopefully she wins a couple of Group 1s on the way!"

When asked if there were ever any thoughts about retaining her, Harper laughed: "I'd like to keep my hairline if possible! I am very happy, there are no regrets. Alastair Pim did a great job in the ring and gave her every chance. There have been a lot of people involved in getting here – and don't forget, this was the last mare that Dad bought so not a bad way to finish off his buying." 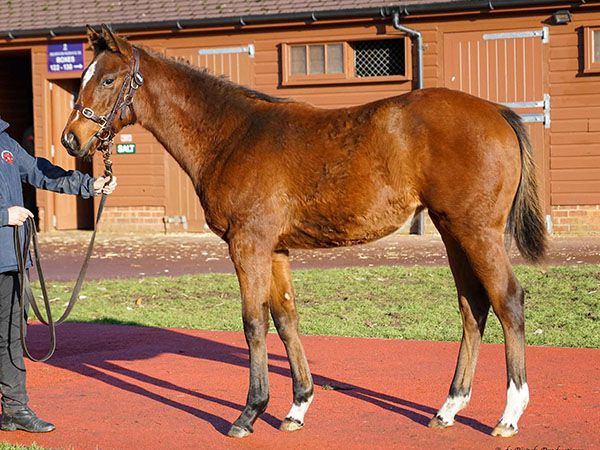 Moyglare Stud enjoyed Classic success in the Tattersalls Irish 1000 Guineas this year courtesy of the FRANKEL filly HOMELESS SONGS and the operation’s Fiona Craig went to 550,000 guineas to secure another daughter of the outstanding stallion consigned by Mount Coote Stud.

"She is a Frankel! And we all know how much he is going to be next year," laughed Craig. "If you breed, you don't know if you are going to get a colt or something upside down. This is a filly, she is nice, she is not a great big striding filly, but I know what Homeless Songs looks like.

"I wasn't going to buy an Oaks winner. I want to buy something fast - we have plenty of slow ones. Speed is so hard to find and she looks fast. Mount Coote do a great job and they raise loads of good horses. And... she is a Frankel!"

Mount Coote Stud bought the filly’s dam SUNNY AGAIN for just €15,000 in 2017 and her progeny have since collected a prolific array of blacktype, led by the Group 3 winner ELISA AGAIN, Listed winner and Group 1 St Leger runner up BERKSHIRE ROCCO and the Group 1 placed SUNSET SHIRAZ. Mount Coote Stud sold her SEA THE STARS yearling colt for 550,000 guineas to Godolphin at Book 1 of the Tattersalls October Yearling Sale earlier this year, and a delighted Tabitha Lillingston commented:

"It is so exciting and we have been so lucky with that mare. She is fantastic and does it every time and now she has some really exciting horses to run for her. When Fiona saw the filly she said she is just the same as Homeless Songs.

"The mare has rewarded us, and sometimes you get lucky. Luke loves his pedigrees and he did a lot of looking at the covering and was really excited about it. Fingers crossed!" 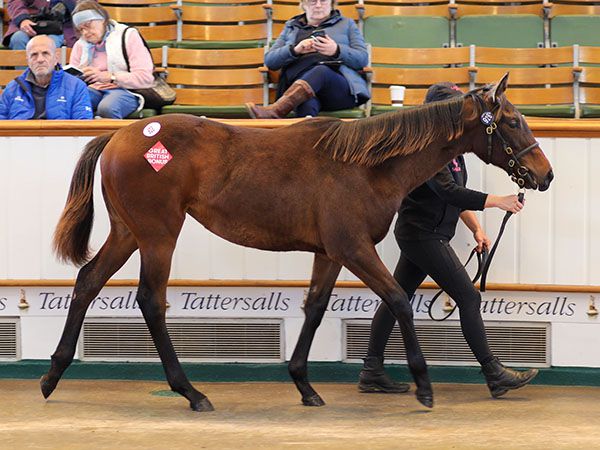 An early highlight of the day came when Langton Stud enjoyed its best result in the sale ring to date with their LOPE DE VEGA filly out of Group winning racemare POET’S VANITY selling to Juddmonte Farms. Billed as one of the day’s star lots, a variety of bidders made a play for the filly from around the ring before underbidder Philipp von Stauffenberg threw a long-contemplated bid of 480,000 guineas, only for Juddmonte Farms’ General Manager Simon Mockridge to respond quickly with the successful bid of 500,000 guineas.

Mockridge commented: "I knew she was very, very popular, everyone liked her. She is a great athlete, a great walker, and has been well produced by Langton. We thought we'd have to be strong on her, but for us she is an outcross pedigree for the longer term. She is a beautiful filly, hopefully she can be a race filly now and then come back home. It is a beautiful pedigree, and it is easy to see why we liked her. She has depth and strength and is out of a Group winner. She has everything and showed well throughout."

Langton Stud purchased POET’S VANITY for 150,000 guineas at Book 1 of the Tattersalls October Yearling Sale in 2015 and sent her into training with Andrew Balding, for whom she won the Group 3 Oh So Sharp Stakes, placed in the Group 3 Nell Gwyn Stakes and was fourth in the Group 2 Sandy Lane Stakes.

"I am just about getting my breath. It has been great but it has been quite stressful too," smiled Langton’s Giles Wates, who admitted his hands were still shaking after the sale. "She was vetted thirteen times! It is one of those days!

"It has been a few years getting here but we have got there now and are on our way and the team has done a great job. We bought her with Richard Brown and she went on to be a very successful racehorse. The mare is a sweet mare, a gentle giant. She is in-foal to Wootton Bassett and she will probably then be rested as she will have a late foal. This filly's older brother by Kingman has been retained and has gone to Andrew Balding. He and this filly are both similar - they are athletic, they have big walks and nothing phases them."

He added: "It is a real compliment that Juddmonte has bought her, and I hope now our farm is going the right way. We made a decision around ten years ago to sell the stock as foals and it has been a good move." 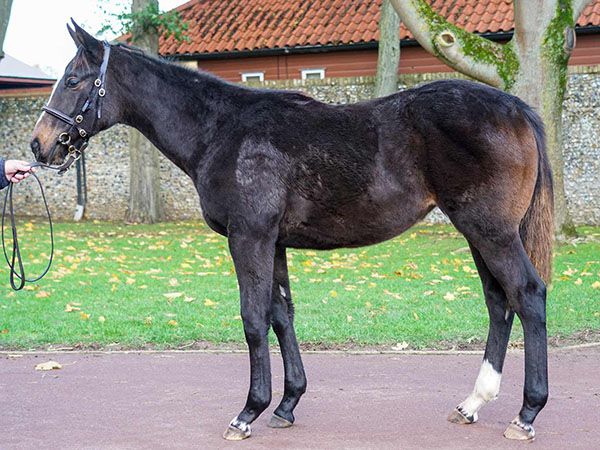 Juddmonte Farms proved a dominant force at the head of the purchasers’ table on the third day of the Tattersalls December Foal Sale and they struck again at 500,000 guineas for a daughter of their brilliant sire FRANKEL out of the Grade 1 performer AWESOMETANK.

The FRANKEL filly was the last lot through the ring consigned by Heatherwold Stud in its current ownership and bloodstock advisor Jeremy Brummitt commented: "It is a bittersweet sale really, she is the final youngster to be sold from Heatherwold Stud under Mick Caddy's ownership - he is ceasing operations and has gone out with a bang!

"I bought the granddam Janey Muddles and remember seeing her win first time out at the Curragh. I think she was Lawman's first winner as a two-year-old. She passed the whole field and was on the slowest part of the ground. I never forgot her and the owner came around to sell her, she was carrying her second foal which was an in-house covering to Intense Focus. I bought her here for 115,000 guineas in 2014.

"That foal became an absolutely lovely yearling and was named Awesometank who we raced. She took us to Canada and Chicago and was second in the Beverley D and now she is breeding. She lives in a field with her dam and they are two of the happiest mares I have ever seen and they both raise happy and contented foals."

Of the FRANKEL covering, he added: "I am not terribly excited about in-breeding to Danehill but I risked it with this mare because she is such a fantastic mover. What I was really looking for was the power that Frankel could provide."

A dual Listed winner and Grade 1 placed, AWESOMETANK is from the family of Group 1 Irish St Leger winner FLAG OF HONOUR and the Group 1 performers AIR CHIEF MARSHAL and FOXTROT ROMEO.

The fourth and final of the quartet of fillies secured by Juddmonte Farms was Selwood Bloodstock’s KINGMAN filly out BURNING RULES for 425,000 guineas, for a total spend of 2,425,000 guineas.

The Tattersalls December Foal Sale concludes with the fourth and final session at 10am on Saturday 26th November.