The renamed and rebranded Tattersalls Somerville Yearling Sale got off to a staggering start on its debut, with turnover double that of last year’s Ascot Yearling Sale that was held in Newmarket whilst the average and median had similar rises, increasing 93% and 76% respectively. The turnover for the sale was an impressive 4,952,000 whilst seventeen lots sold for 50,000 guineas or more, compared to just one last year.

Leading the way was lot 206 who became the first ever six-figure lot at this fixture when selling to Adam Driver of Global Equine Group for 120,000 guineas. The TWILIGHT SON colt out of the Listed winning and Group 1 Cheveley Park Stakes placed BAILEYS JUBILEE was consigned by Petches Farm, which is owned by Baileys Horse Feeds' managing director Paul Venner. His son Simon, the company’s sales director, was on hand to chat about the sale:

"We weren't quite expecting to that level, we were very hopeful as we knew we were bringing a nice individual to the sale. All the right people were on him. He has always been quite an eye-catcher, very strong and straightforward, and he has not taken too much work. He has been flat out since getting here, he showed himself off greatly and I think he owned this runway in the Further Yard, he caught a few eyes. He had a few vettings and it is nice when it works out."

Putting on his sales hat, Venner added: "Obviously Petches is linked with Baileys so it’s nice to show that the feed works!"

Purchaser Adam Driver said: "We will get him back to Jo Fenton's and she will work her magic, break him in and get him backed. He is a strong solid horse, so we will see what he shapes up into. He is for Raed El Youssef whom we have bought some breeze up horses for. We've had a bit of luck with the breeze up horses, so he thought he'd buy a few yearlings. No trainer has been decided upon yet.” The first crop of runners by young sire ARDAD have set racecourses alight in 2021 led by the Group 1 Prix Morny winner PERFECT POWER and the Group 3 Sirenia Stakes winner EVE LODGE, a 12,500 guineas purchase at this sale last year. Lot 128, a filly by ARDAD out of the LUJAIN mare SPARKLING EYES who was bred and consigned by Scarlett Knipe's Cobhall Court Stud, was purchased for 85,000 guineas by Robson Aguiar on behalf of Kia Joorabchian’s Amo Racing.

"We sell foals mainly – I am going home now to do eleven foals that will be here in December!" said Knipe, adding "However, we will keep the fillies to sell as yearlings."

Of this filly, Knipe said: "This filly was never really in the box here and she has been as good as gold, a joy to deal with. The dam is in-foal to Havana Grey and she had a colt foal by Tasleet. I like to go for good-looking sires, ones that I hope are going to come out straight and correct. I bought her in-foal carrying Pea Shooter, but she is getting older now."

Aguiar, who purchased five lots on the day commented: "I bought a few by Ardad last year and I breezed Perfect Power, and Ardad himself. This sale is a good investment as I pay the price they are worth, and if they are good you can sell them on.

"I am happy with my purchases – I don't mind if I buy fillies or colts, I like to buy horses that I think will be good racehorses. I look at everything in the catalogue and make a short list of five or six and try to buy them." 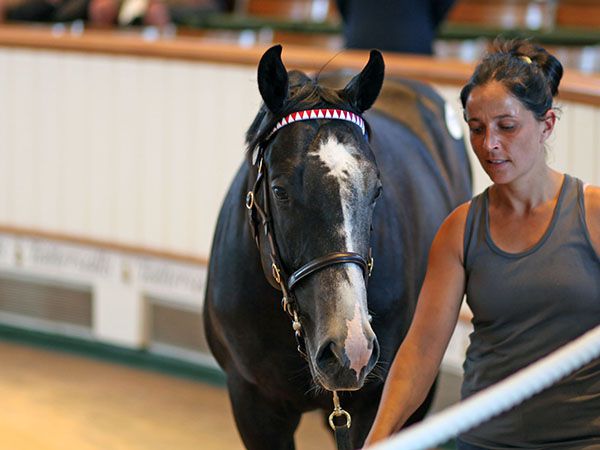 The first yearling colt by Juddmonte Farms’ EXPERT EYE to be sold at Park Paddocks this year was knocked down for 80,000 guineas to the bid of agent Freddy Tylicki with Smarden Thoroughbreds and Steve Bradley. The grey colt had plenty of suitors with bids coming from Middleham Park Racing, Tessa Hetherington and Peter Nolan but it was Tylicki in the gangway who was victorious. The colt was consigned by Michael Fitzpatrick’s Kilminfoyle House Stud who purchased him at the Tattersalls December Foal Sale for 41,000 guineas.

"I loved him, I thought he was the pick of the sale and I am very taken as to how well Expert Eye is throwing them," commented Tylicki. "This is for a client, and we were very keen on this lad. There is a lovely update on the page as well and this horse has it all going for him.

"No trainer is planned yet, we will chat and make plans. This is the one we wanted and we've got him so we are delighted. He has a lovely physique, a great walk to him, plenty of presence and a very good eye to him. He ticked a lot of the boxes – probably all of them!"

The colt is out of the DALAKHANI mare WHITE CAY and is a half-brother to the Grade 3 winner CAY DANCER and the French Listed winner DYNAMIC. WHITE CAY is herself a half-sister to BALISADA, the winner of the Group 1 Coronation Stakes. 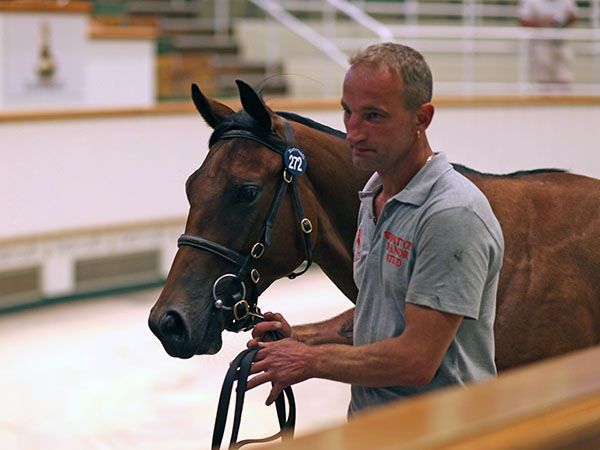 Late in the evening, agent Kevin Ross struck to secure the NIGHT OF THUNDER colt out of the winning HIGH CHAPARRAL mare FLEABISCUIT for 78,000 guineas after seeing off multiple bidders including Oak Tree Farm’s Norman Williamson and Tessa Hetherington from Park Hosue Stables. The colt was consigned by Ed Player’s Whatton Manor Stud.

"He is by Night Of Thunder, a proper sire, and he is a good solid colt. He is out of mare who had a lot of ability, a High Chaparral mare who won as a two-year-old. I just liked him as an individual," said Ross.

“We are absolutely delighted with today’s inaugural Tattersalls Somerville Yearling Sale. We had no choice but to relocate last year’s Tattersalls Ascot Yearling Sale to Park Paddocks and it proved to be a great success which made the decision to rebrand and permanently relocate the fixture a relatively straightforward one. Sale turnover of double last year’s wide margin record level as well as huge rises in average and median fully vindicate the decision and suggest that the Somerville Yearling Sale can legitimately be regarded as Europe’s most progressive yearling sale.

“There has been a genuinely vibrant atmosphere around Park Paddocks for the past few days and just as with last week’s Tattersalls August Sale, it has been a pleasure to have been able to conduct the Somerville Yearling Sale without the need for any restrictions. We have welcomed buyers from throughout Europe and further afield, but perhaps the most encouraging feature of today’s sale has been the prolific number of British trainers who have been active. They have all contributed to a sale which has produced more lots sold for 50,000 guineas or above than the previous four Ascot Yearling Sales combined, a record top price of 120,000 guineas and a clearance rate well over 80%.

“We should also pay tribute to the consignors, both British and Irish, who have allowed us to take this sale to a new level. They have supported the sale with quality stock and their confidence in the sale and the venue has been rewarded. The inaugural Tattersalls Somerville Yearling Sale has been energetically and widely promoted, not least with the introduction of the £100,000 Tattersalls Somerville Auction Stakes, and the enthusiastic response from buyers is a positive indicator as we look forward to the Tattersalls Ireland September Yearling Sale and Books 1 to 4 of the Tattersalls October Yearling Sale."