Book 3 of the Tattersalls October Yearling Sale got off to a strong start with honours split amongst four yearlings who all realised 130,000 guineas.

The first of the four yearlings to sell for 130,000 guineas was the MEHMAS filly out of the STREET CRY mare ARAAJMH who was knocked down to Blandford Bloodstock’s Tom Goff. ARAAJMH is a daughter of the Group 1 Falmouth Stakes winner RAJEEM and a half-sister to last year’s Group 2 Duke of York Stakes winner INVINCIBLE ARMY.

"I saw her in the rain yesterday and again this morning, and she is an absolute star. Ed Dunlop rang me early this morning from Warren Hill and asked if anything was in early, these things happen fast. She is a lovely mover, I bought one by the sire on Monday and he is an absolute revelation," said Goff.

MEHMAS, who stands at Roger O’Callaghan’s Tally-Ho Stud, has been enjoying a stellar year with his first runners which have included the Group 1 Middle Park Stakes winner SUPREMACY, the Group 2 Gimcrack Stakes winner MINZAAL and the Listed winners ACKLAM EXPRESS and METHOD.

The chestnut filly was sold by Loughmore Stables’ Kitty Fitzpatrick who commented: "She was bought in partnership with Luke Barry for €11,000, she is a lovely filly and we were delighted from the day we bought her. Obviously Mehmas has done what he has done, which is a huge help. She behaved like a queen and all the right lads were on her.

"I have a mare in-foal to the sire on the back of this filly, so hopefully she is lucky for new connections."

Of coming into this sale, Fitzpatrick added: "Book 2 was very strong, when you see what is going in the world, it was amazing. We have to be grateful that we are here at all trading, long may it last!

"I was always confident there would be a turn in her, but I didn't think she'd make that sort of money! I liked her a lot, so I am not gobsmacked as I have thought a lot of this filly all the way through. She was a lovely foal, had a big walk, strength and was always a very strong powerful filly."

Explaining how the pinhook buying works with Luke Barry’s Manister House Stud, she said: "We spilt the foals up 50/50 with Manister House, and the lads at home have done a great job. It couldn't be done without them." 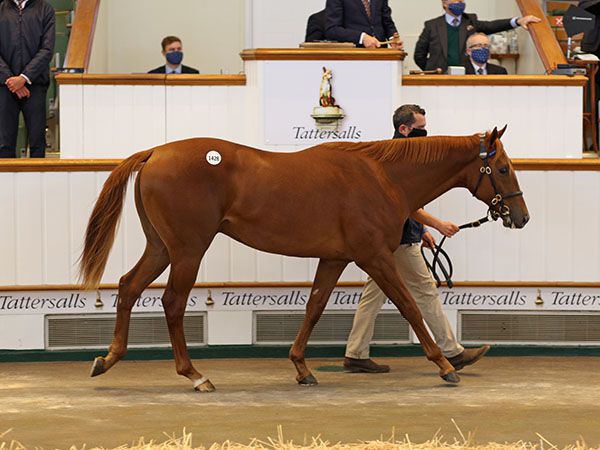 Adrian and Philippa O’Brien’s Hazelwood Bloodstock were responsible for the second six-figure yearling of the day when their NIGHT OF THUNDER colt out of the DUKE OF MARMALADE mare DOMINIKE sold for 130,000 guineas to the bid of Brendan Holland’s Grove Stud.

The sale represented an impressive pinhooking profit for his owners, who had purchased him via agent Troy Steve for 20,000 guineas at last year’s Tattersalls December Foal Sale.

"He has been bought to breeze. He is by a leading sire, he is a good type and I have been lucky with the sire," commented Holland. "This is a lovely clean-limbed horse with plenty of scope, I think he would have matched up with the horses sold earlier this week.

"The strong market gives everyone confidence for the foal market and for the spring too, this has helped."

Hazelwood Bloodstock have previously topped Books 1 and 2 of the October Yearling Sale and principal Adrian O'Brien was very pleased with their decision to target Book 3 with this colt.

"It is all about Night of Thunder. He has been sensational on the track this season and we brought this horse to Book 3 as we thought he'd stand out a bit. It’s a good sale and you get well paid if you bring the right horse." 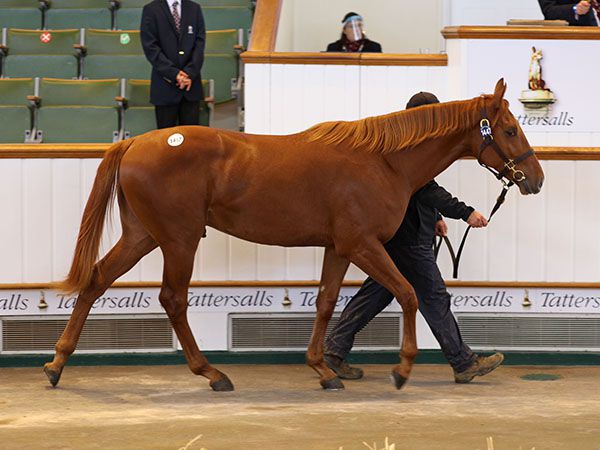 The third of the four lots to realise 130,000 guineas was the FARHH colt out of the NATHANIEL mare FAIR DAUGHTER. Consigned by Nicholas and Jane Forman-Hardy's Car Colston Hall Stud, the pedigree is full of Group 1 winners bred by the Nottinghamshire nursery including the Racing Post Trophy winner CROWDED HOUSE, the American Oaks winner TICKER TAPE, the Middle Park Stakes winner RECKLESS ABANDON and the Prix Maurice de Gheest winner BRANDO.

The February-born colt was purchased by Stroud Coleman's Matt Coleman to race in France.

"It is a wonderful family, Car Colston is a fantastic breeder and a stakes horse seems to pop up on this page every year so we are delighted to get him, and he has been bought for a client to race in France," said Coleman.

"He is just a lovely moving horse, and obviously Farhh's statistics are incredible. He is a lovely staying prospect and will be more a three-year-old than a two-year-old, but we were looking for a really nice middle-distance type."

Stud manager Jonathon Smithers was all smiles, commenting: "We are delighted, it is a first foal out of the mare, the penultimate daughter out of the foundation mare Weiner Wald. It is a fantastic chance to get the mare off and running, Farhh's page is fantastic and we wish the colt's new owners the best of luck.”

Whilst the pedigree hardly needs any updates, there was a new stakes winner for the family just last week when the two-year-old colt ERASMO, out of SANT ELENA, a granddaughter of WEINER WALD, won a Listed race at Chantilly on just his third start.

"He is a big strong foal, just glad he made that. He showed himself really well here," added Smithers. 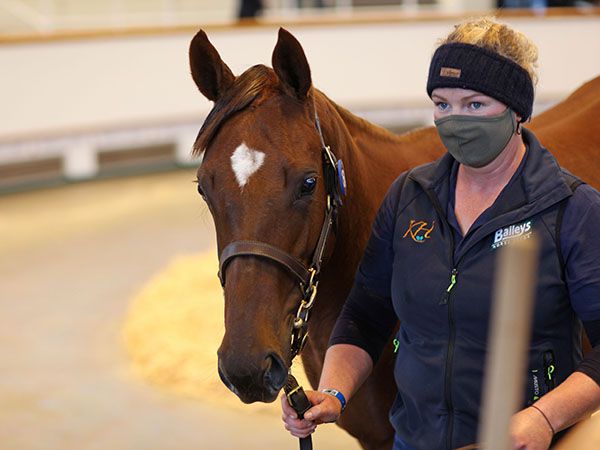 The fourth and final lot to realise 130,000 guineas for the day was the CHURCHILL half-sister to the dual Listed winner MAIN DESIRE. Consigned to the sale by Keith Harte on behalf of Max Ervine, the filly was knocked down to Ballyhane Stud’s Joe Foley on behalf of Steve Parkin’s Clipper Logistics.

"The filly is lovely, she looks very fast, the mare was very fast," said Foley.

"We bought Main Desire at Fairyhouse and she was very fast. She was second favourite for the Queen Mary but broke her cannon bone, and had a good character to come back from that and win the Listed Westow Stakes on her next start.

"The mare comes from a high-class US tap root family and, though she has gone to 'distancey' stallions, she has bred very fast horses by the likes of High Chaparral, New Approach and Mastercraftsman. We have followed them all and they have all been big, rangy horses.

"We love Main Desire, she is one of our favourites. She has got a Frankel foal and is in-foal to Churchill. We were very interested to see this filly this morning, and we loved her, she looks like a speedball and has a lot of Churchill quality about her."

The daughter of the ORIENTATE mare PURPLE GLOW was consigned by Keith Harte, who in the last year has bought a farm near Finchingfield, North Essex.

"This is the best yearling result we have had so far from the new farm, which is around 25 miles from here," said Harte. "Max has been selling with us for years, he is a great breeder. We sold Wichita for him."

Harte added: "I am delighted that Joe has bought the filly as he has made the family. The filly came to us a couple of weeks ago from Max's farm and she has been straightforward and easy to do. Everyone who has seen her has loved her and she looks a two-year-old, just like her sister. She has a big back-end on her, has a good attitude but wants to get on with the job, I am sure she'll want to run. The mare has only had the one filly and she was a stakes horse."

Book 3 of the Tattersalls October Yearling Sale continues at 10am on Friday 16th October.