Book 1 of the eagerly anticipated Tattersalls October Yearling Sale got off to a strong start with the highest priced yearling in Europe or North America this year as four lots sold for 1,000,000 guineas or more.

Leading the way was the KINGMAN half-brother to the 2,000 Guineas winner GALILEO GOLD who was knocked down to Oliver St Lawrence for 2,700,000 guineas. The colt, who was consigned by Robin Sharp’s Houghton Bloodstock on behalf of Colin Murfitt’s Pantile Stud, was purchased on behalf of Fawzi Nass and Bahraini interests.

Pantile Stud's stud manager Bo Hicks-Little said: "He has never put a foot wrong. He is a super star, and not just physically, he is so mentally strong too, he is such a professional. He was a late April foal and we had a bad night when he was born as we nearly lost the mare. We had to bottle feed him for 24 hours."

The Pantile yearlings always go to Houghton for the last eight weeks of their prep and consignor Robin Sharp was thrilled with the sale.

"That is the best price for Houghton – our previous best was 500,000gns last year," said Sharp. "I am delighted for Colin – he has been a friend and a client for a long time. This is a lovely, lovely colt. He has taken his prep so well and he is so much like Kingman, which is what I think made people take notice of him. He really stood out and is a class-looking horse.

"It is unbelievable, you always approach sales with an amount of trepidation, especially this year. But this is what makes this game – it is like snakes and ladders!"

Oliver St Lawrence, who had been underbidder on the FLECHE D’OR filly a few lots earlier, saw off a determined effort from agent Ross Doyle standing next to MV Magnier.

Following his purchase, he commented: "He has been bought for Fawzi Nass and Bahraini interests. He is a gorgeous horse, he has a stallion's pedigree and he will go into training with Roger Varian." 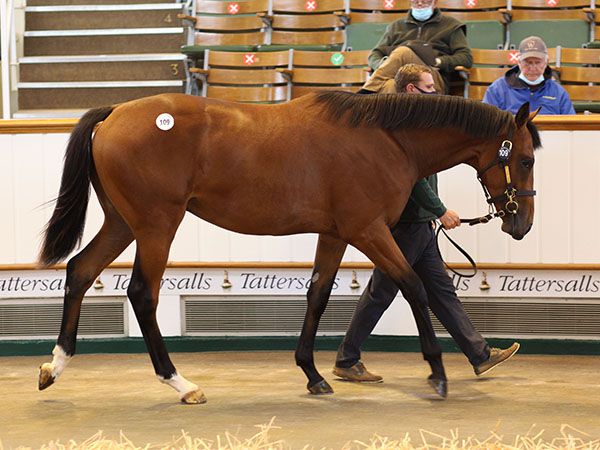 The second highest priced lot on the opening day was the DUBAWI colt out of the Grade 3 placed GALILEO mare CUSHION, a daughter of the dual 1,000 Guineas winner and Floors Stud stalwart ATTRACTION. The colt was knocked down to Anthony Stroud on behalf of Godolphin for 2,100,000 guineas after a prolonged bidding battle with underbidder MV Magnier, the pair going head-to-head via bid-spotters from outside the sale ring.

"This is a lovely horse, obviously by Dubawi," said Stroud. "He moves incredibly well, he is from a very good stud, and we collectively all really liked him. It just shows that when a very nice horse comes up to the ring, there are lots of good people there for them, they are collectors' items."   Stroud added: "It is so sad that the Duke is not here because he was a wonderful breeder, a wonderfully good friend, a wonderful enthusiast; he would have loved to have been here, and he's done a fantastic job. He is probably looking down."

The sale represented the highest price achieved by Floors Stud in the sale ring, topping the 1,600,000 guineas sale of the 2015 FRANKEL colt out of ATTRACTION, subsequently named ELARQAM and a multiple Group winner for owner Sheikh Hamdan Al Maktoum.

The Duchess of Roxburghe, taking well wishes from many of the assembled crowd, said: "This family means a huge amount to us, and Attraction is an absolute heroine, we are all very emotionally attached to her. The Duke adored this Dubawi colt as a foal so I hope he is watching upstairs!

"My son George runs the stud with me, but he has a new job and was not able to be here today, which is a real shame. Ed [Sackville] has been a fantastic support and with Simon Marsh too, and all the team at Floors has been amazing, Chris [Gillon] and his team. Chris deserves a special mention, he has produced the horses to perfection, every single one of them. I was so pleased it was him leading up the colt today.

"I am thrilled for my late husband who did nothing but dream of Attraction and she has really done us proud. They were two really lovely horses, and they have been since they were foals. My husband always thought they were two of the best he had ever produced – and he has been proven right. We wish Anthony Stroud and the team all the success.

"I have spoken to George and he is sitting biting his desk, he is chuffed to bits! I watched in the ring and it is not quite as it is normally, but it was still very exciting and it was tear-jerking stuff. I had some really old dear friends were with me, and it was special to have them supporting me."

Ed Sackville, Floors bloodstock advisor, said: "It is a hell of a result, we are incredibly grateful to Anthony Stroud for buying him, and it is very nice to be standing back here again and talking, I hope it continues through the week! He is a very nice horse, by Dubawi who needs no introduction – a phenomenal sire who has just done amazingly and continues to deliver year after year.

"And he is out of a Galileo mare, who is a tremendous broodmare sire, and she is a daughter of Attraction so there is a hell of a pedigree to go with it, and Cushion was also a good racemare. Everything was in our favour, certainly on the pedigree, but we were also very lucky as he was also an outstanding individual and two high profile buyers decided to take each other on." 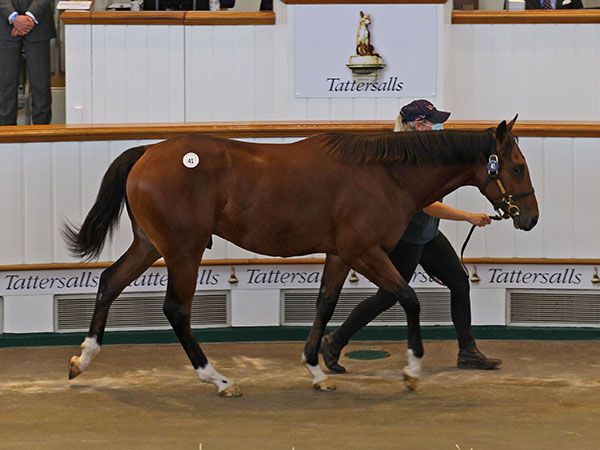 Floors Stud had earlier been celebrating when their FRANKEL colt out of the aforementioned five-time Group 1 winner ATTRACTION topped a million guineas when selling to Godolphin after Anthony Stroud outbid trainer Andrew Balding at 1,100,000 guineas.

ATTRACTION was also bred by Floors Stud, the farm so successfully developed by the late Guy Innes-Ker, the 10th Duke of Roxburghe, and Chris Gillon, the Floors stud manager was at Tattersalls today to oversee the sale of this colt. A stand-out on pedigree ahead of the sale, the good-looking colt certainly lived up to his star billing.

"It's absolutely brilliant, absolutely fantastic," said Gillon, who has been stud manager at Floors for eight years. "We loved him as a foal and he came perfect all the way through his prep. He got down here and everything went so well. He is a beautiful-looking colt. He never stopped and was so popular with everyone. Just to see him go through the ring and do that – it is the icing on the cake.

"The late Duke saw him as a foal and he loved him and thought he was the best yet that Attraction had had, but for the colt to come here and do exactly that – the Duke will be up there smiling, that's for sure. It is brilliant for everyone involved, the late Duke, the Duchess, everyone, it is brilliant and we couldn't ask for any more."

An understandably emotional Duchess of Roxburghe said: "He is such a lovely colt, we are thrilled. He has such an easy temperament, and has taken it all in his stride, and we are delighted as would my late husband be."

Bloodstock advisor Ed Sackville added: "That was absolutely amazing, we are all delighted. We are very grateful for the support from the buyer and hope the horse is lucky – as lucky as Elarqam has been for Shadwell. There was plenty of interest from all the big players, but you never know what to expect. Chris and his team have done a brilliant job.

"This is a lovely horse and has been since he was a foal. Let's hope he is as successful on the track." 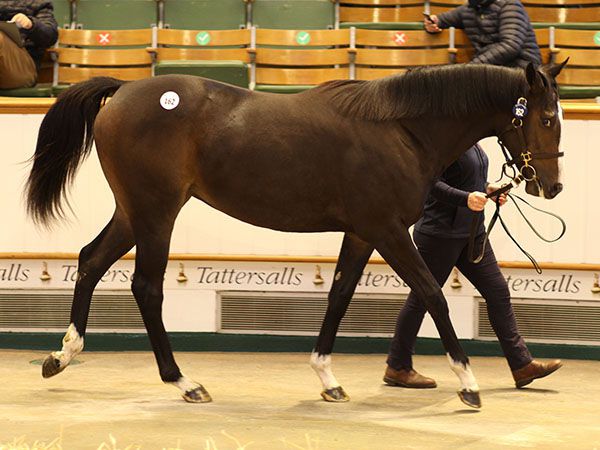 Frankel Sister to Golden Horn to Godolphin for 2,000,000 Guineas

The top priced filly for the day was the FRANKEL sister to the 2015 Derby winner and European champion three-year-old colt GOLDEN HORN who was knocked down to Anthony Stroud on behalf of Godolphin for 2,000,000 Guineas.

Stroud secured the daughter of the DUBAI DESTINATION mare FLECHE D’OR after seeing off a determined underbidder in Oliver St Lawrence. The filly was bred by the Fleche D'Or Partnership and consigned by Norelands Stud.

"We were really in two minds whether to race her or sell her, we'd have been very happy to have raced her," said Harry McCalmont of Norelands Stud. "We were only going to sell her if we felt she was fetching what we thought she was worth. If we had kept her to race she was going to John Gosden, so we thought we might as well bring her to Newmarket – if we didn't sell we could have taken her straight to John's!"

McCalmont added: "We are delighted that Sheikh Mohammed has bought her and delighted to see him here."

FLECHE D’OR has proven a goldmine for her owners who purchased her at the 2012 Tattersalls December Mares Sale for 62,000 guineas through BBA Ireland with her 2018 colt realising 3,100,000 guineas in this ring last year. Now named DHAHABI, he has run twice and was most recently second in the Listed Denford Stakes.

FLECHE D’OR has a SEA THE STARS filly foal at foot, and is in-foal to KINGMAN.

"We will definitely be keeping the foal this time, I know I said that last year about this one!" laughed McCalmont. “It was not a bad purchase!”

Matt Gilsenan, Norelands' stud manager, was a little more rueful as admitted he had been looking forward to racing this Frankel filly.

"She is an absolute queen, but it is all positive and a great result for the stud. Fleche D'Or is a magnificent mare and this filly looks the real deal."

Day 2 of the Tattersalls October Yearling Sale continues at 11am on Wednesday, October 7th.