A pair of GALILEO yearlings set the sale ring alight on the third day of Book 1 of the Tattersalls October Yearling Sale as they became the two highest priced yearling fillies to be sold in the World in 2020. A strong final session saw a further four lots sell for 1,000,000 guineas or more, taking the number of seven figure lots to nine for the sale.

Leading the way was the much-anticipated GALILEO filly out of SHASTYE who lived up to expectations when selling for 3,400,000 guineas to the bid of MV Magnier, the highest priced yearling sold in Europe or North America this year.

Bidding on the beautifully bred filly mostly took place outside the sale ring with David Redvers, Oliver St Lawrence and MV Magnier all placing bids via the bid-spotters. In the end it was the Coolmore team, stood alongside Georg Von Opel, who were successful.

"It is a great result for everybody involved, she has been bought in partnership with Westerberg," said MV Magnier. "She is a very nice filly, she is a very nice mover, like Japan and Mogul. The mare produces great-looking stock and great racehorses, let's hope she does it one more time."

The Newsells Park Stud consigned filly is a sister to the Group 1 winners JAPAN and MOGUL and is set to join her full-brothers at Ballydoyle. Her foals have enjoyed a remarkable time in the Tattersalls sale ring, with SIR ISAAC NEWTON, MOGUL and this filly all realising 3 million guineas or more and all occupying a spot in the top ten prices at Tattersalls yearling sales.

"Those are the easy ones to sell!" smiled an emotional Julian Dollar of breeder and consignor Newsells Park Stud. "The team lead by Mark Grace, the yearling manager, has done a wonderful job. He loves that filly so he will be very sad, but he has done a great job."

The seven yearlings out of SHASTYE to be sold at Tattersalls have realised just shy of a remarkable 14 million guineas. 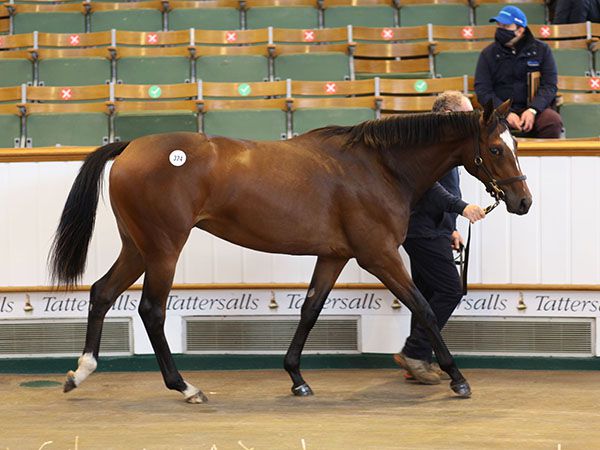 The GALILEO filly out of the Grade 1-placed PRIZE EXHIBIT had held the accolade as the most valuable yearling filly to be sold in the world this year for a couple of hours when selling for 2,800,000 guineas before that price was eclipsed by the daughter of SHASTYE.

PRIZE EXHIBIT, who was also a dual Grade 2 winner in the US, is a full-sister to this year's Group 1 Sussex Stakes winner MOHAATHER as well as a half-sister to ROODLE, dam of the Group 1 Queen Anne Stakes winner ACCIDENTAL AGENT. She was purchased at the Tattersalls December Mares Sale in 2017 by David & Diane Nagle’s Barronstown Stud and this is her first foal.

She was knocked down to MV Magnier after he saw off underbidder David Redvers as well as Tammy O’Brien, sat alongside Demi O’Byrne. She is the fourth-highest priced filly sold at October Book 1.

"She's a very nice filly, Aidan and all the lads liked her," said Magnier.

"Breeder David Nagle has been saying for a very long time how good a filly she is. We are very lucky to have been able to buy her with Michael, Derek, Georg Von Opel and everyone; we are lucky to have her now. She has a great page, she comes from a very good nursery."

Reflecting on her pedigree, Magnier added: "These kind of fillies are collectors' items, with Galileo and how he is doing as a broodmare sire. She is just exceptional. Sheikh Hamdan's horse [Mohaather] was a very good horse, and it is a very active pedigree." 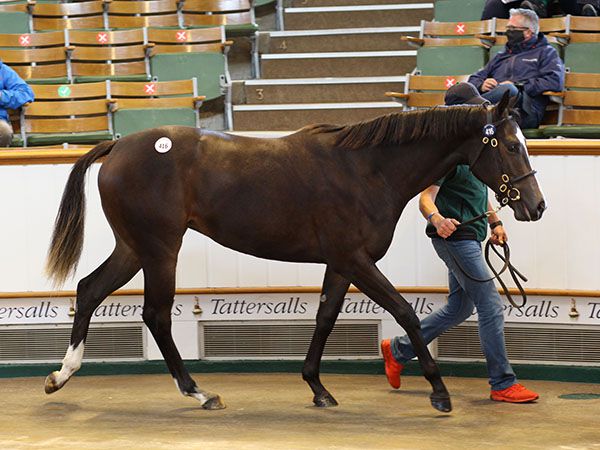 Demand for the progeny of Juddmonte Farms’ KINGMAN continued on day three of the Tattersalls October Yearling Sale, Book 1 with a daughter of the Listed-placed DREAM AHEAD mare SANTE fetching 1,450,000 guineas to the bid of Anthony Stroud on behalf of Godolphin.

Bred by Michael O'Leary's Gigginstown House Stud and sold by his brother Eddie O'Leary's Lynn Lodge Stud, the KINGMAN filly comes from a page full of black-type. Her dam SANTE is out of the Listed winner ZEITING and is a sibling to the Group 2 winner COMBAT ZONE, Group 3 winners ROYAL EMPIRE and SCOTTISH, the Group 3-placed BIKINI BABE, dam of recent Group 3-winning juvenile LA BARROSA and the Group 3-placed ZUT ALORS, dam of PRECIEUSE, winner of the Group 1 Poule d'Essai des Pouliches.

"She was always a queen and made a queen's price there," said Eddie O'Leary, adding: "I hope she is very lucky for Sheikh Mohammed, she is a smashing filly."

SANTE, who was purchased by Margaret O'Toole for 310,000 guineas at the Tattersalls December Mare Sale in 2018, had a KODIAC colt this spring and is in-foal to INVINCIBLE SPIRIT. 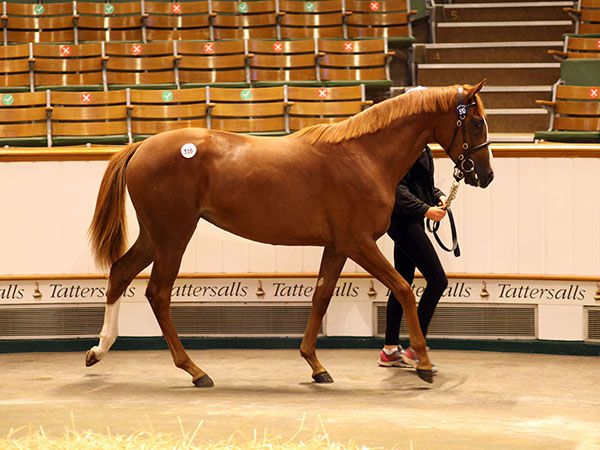 Sister To Dream Of Dreams Set For America

A final highlight of the third day was a prolonged bidding battle for another regally bred daughter of GALILEO offered by owner-breeder Ibrahim and Pinar Araci's first Old Mill Stud draft.

The filly was knocked down to US agent Mike Ryan for 1,400,000 guineas who saw off the attentions of an online bidder to buy the half-sister to this year’s Group 1 Haydock Sprint Cup winner DREAM OF DREAMS, from the family of top-class fillies AIRWAVE, MEOW, and JWALA.

"I thought she was an exceptional filly, she is by an exceptional sire, from a terrific family – there is really nothing more to add, she was absolutely gorgeous and looks like a runner," said Ryan. "I knew she was going to be expensive, you know what it takes to buy Galileos and she is a sister to a Group 1 winner. I am delighted we got her because I waited all day for her.

"How many more years are we going to be seeing Galileos? He is the greatest sire in my lifetime, probably in anybody's lifetime for that matter! She'll go back to the States. She'll get a bit of turnout, we'll break her in a month or so – hopefully you'll see her in Saratoga in the summer.

"And hopefully," he added, pointing to the sale ring wall, "we'll see a picture like that one of Newspaperofrecord over there! The first time I saw her was in the rain on Saturday and she blew me away. I saw her two or three times since then – it was a no brainer, there is no real skill picking out a filly like that!"

Ryan has bought 14 horses at Book 1 of the Tattersalls October Yearling Sale, and of his trip to Europe and the state of the market Ryan commented:

"I have been runner-up to Shadwell, Godolphin, Roger Varian, Henri Devin, we have run hard on some horses to 450,000gns, 550,000gns... but we have bought some very nice horses and I am pleased with what we've got. I am very happy to be here, and as I have said before, no disrespect to Japan or Australia or anywhere else for that matter, the best grass horses in the world are here and this is the best sale in the world for top-class grass horses. We've bought some good ones here and I hope the luck continues."

Bloodstock manager Rob Speers of Old Mill Stud was delighted with the sale.

"She genuinely is a beautiful filly, she was born and raised with us and she has done everything very easily," he commented. "Prep was straightforward for her and she oozes class. We own the mare and have daughters of hers in the paddock, and the mare is just 16 so hopefully there will be more daughters to come.

"It was with a slightly heavy heart when I see a filly like her leave, but she is in great hands with Mike Ryan and his team in America, and I wish them every success and I am sure she will be a star."

At the conclusion of Book 1 of the 2020 Tattersalls October Yearling Sale, Tattersalls Chairman Edmond Mahony commented:

"First and foremost we would like to express our sincere thanks to everyone who has participated at Book 1 of this year’s Tattersalls October Yearling Sale, in whatever capacity. Since the early part of this year every walk of life has been thrown into turmoil and the global bloodstock industry is no exception. The scale of the disruption which everyone has faced is best illustrated by the fact that this week’s sale has been the first 2020 British, Irish or French yearling sale to have taken place at both its originally intended location and date. Nevertheless, since the outbreak of the COVID pandemic we have worked collaboratively alongside Goffs and Arqana to explore every possible means by which to stage sales and to ensure that trade continues to take place as normally as possible. Everyone must take enormous credit for the way they have reacted to the difficult circumstances and responded to all the rules and regulations under which we have had to operate in order to provide the safest possible working environment for all concerned.

"In terms of the market, none of us can pretend that all is plain sailing and a slightly lower clearance rate reflects prevailing commercial realities from which none of us are immune, but we can also reflect on a resilience and sustained demand for quality yearlings in spite of the wider challenges. Book 1 of the 2020 Tattersalls October Yearling Sale has yet again produced the highest price for a yearling sold in Europe and North America, as well as the highest priced yearling filly in the world and three of the ten highest prices ever at this fixture. Inevitably the market is down, in broad terms to around the levels of 2015 after a sustained period of growth, but the global appetite for our sport remains intact and buyers from throughout the world, albeit in reduced numbers, have made a huge contribution to Book 1 of the October Yearling Sale, as have the British and Irish buyers who continue to recognise this particular yearling sale as the key fixture in the European yearling sales calendar. Success - fuelled demand from American and Australian buyers has been very evident from start to finish and the support and commitment from throughout the Gulf region, in particular Dubai, Bahrain and Saudi Arabia, continues to be hugely influential and massively appreciated by the whole industry.

"The significance of the lucrative October Book 1 Bonus, arguably greater than ever, has also been a feature of the sale and having distributed almost £5.5 million in bonus prize money to date, it has been rewarding to see so many owners, trainers and syndicates actively pursuing future bonus winners. Opportunities to win significant prize money have never been more crucial and the importance of incentives such as the £20,000 Book 1 Bonus, as well as the Great British Bonus, should not be underestimated in the current climate.

"Equally significant has been the outstanding quality of the yearlings on offer this week. This was without doubt the cream of the European yearling crop; a true showcase for so many of the best yearlings to be found anywhere in the world and we must pay tribute to the breeders and consignors. The market may not fully reflect the quality of the horses at Park Paddocks this week, but everybody should be applauded for what they have achieved in the face of extraordinary challenges and we will now turn our attention to Books 2, 3 and 4 of the October Yearling Sale which are catalogues with all the ingredients to appeal to buyers at all levels of the market."

The three-day Book 2 of the Tattersalls October Yearling Sale starts at 10am on Monday 12th October.