The Tattersalls December Foal Sale continued in robust fashion on the second day with three lots selling for 200,000 guineas whilst eleven lots sold for a six-figure value. The turnover, average and median all showed significant increases on last year’s corresponding session.

Leading the way on the second day of the Tattersalls December Foal Sale was Whitsbury Manor Stud’s HAVANA GREY half-brother to the Group 1 performing sprinter DRAGON SYMBOL, who was knocked down to Philipp Stauffenberg for 250,000 guineas.

"He is a fine looking horse and is a brother to a horse who should be a Group 1 winner. I just loved him and he was the one I wanted today, so that is why I bought him!" smiled Stauffenberg. "I liked Havana Grey's first crop, although I did not buy one from that crop, but he has proven that he is capable of producing a good horse so hopefully he will go on now."

The colt is out of the ARCANO mare ARCAMIST and was consigned by Ed Harper’s Whitsbury Manor Stud, who stand the first season sire sensation HAVANA GREY.

"It just sounds so boring with these nice ones, and they don't just pop out of nowhere, but he has been nice all the way along," Harper reported. "He is probably a bigger model than Dragon Symbol, but Arcamist just keeps throwing lovely stock. It is a family we have done really well with and we have had for a long time - Dad bought the second dam Good Enough in the US around 25 years ago. She was the most expensive mare he'd ever bought at that time - it was around $250,000 and was a lot of money for us."

HAVANA GREY is the sire of thirteen Group/Listed performers in his first crop with the Group winners RUMSTAR, EDDIE’S BOY and LADY HOLLYWOOD amongst his 41 individual winners. The first lot to realise more than 200,000 guineas on the second day of the Tattersalls December Foal Sale was Rossenarra Stud’s MEHMAS colt out of the STORMY RIVER mare HEAVENLY RIVER, who was knocked down to agent Ross Doyle for 240,000 guineas.

Doyle commented: "As always it’s the physical, and it’s a huge bonus that he’s by Mehmas. He’s from a very good nursery in Rossenarra and is closely related to a very good filly. I thought he was an absolute standout. He had a lot of strength for his age, he’s naturally very strong with a good deep girth and he was a real pro for every show - that’s his dad’s influence coming through. He might come back for resale but I’d say long-term they’ll race him.

"Mehmas has obviously been very lucky for lots of people including ourselves. We bought Persian Force last year for Amo Racing. We’ve had massive pleasure out of Mehmas and so have so many people, going right back to John Cullinan and Roger Marley in his breeze up days, then at Richard Hannon’s yard - all the staff there were mad about him.

"They used to say to me that he’d go the races, come home, go for a pick of grass and put on weight. Then he ended up at Tally-Ho, which is one of the best studs in the world, and they’ve done a wonderful job with him."

The full-brother to the Listed winning and Grade 3 placed filly QUATTROELLE was bred and consigned by John McEnery’s Rossenarra Stud. Their dam HEAVENLY RIVER was purchased at the 2015 Tattersalls December Mares Sale for just 5,000 guineas.

McEnery recalled: "I had to go home to Ireland and left my nephew Billy to look at a few pedigrees and he picked her up. She was a maiden mare and we bought her out of Karl Burke's yard."

QUATTROELLE runs today in the Grade 3 Red Carpet Stakes at Del Mar but McEnery was not tempted to wait to sell his colt in the hope of a pedigree update.

"I hope she wins," he said, adding with a smile: "It will give the next man a bit of luck too." The first foals of DUBAWI’s four-time Group 1 winning son GHAIYYATH have been in great demand this week and none more so than Kellsgrange Stud’s chesnut colt out of the INVINCIBLE SPIRIT mare SCHOOL RUN, who realised 240,000 guineas to the bid of Church Farm & Horse Park Stud’s John Cullinan.

"I saw the horse yesterday and loved him," said Cullinan. "We were keen to buy a Ghaiyyath, he is one of the stallions who has been on our mind as a first crop sire. He looks to have very good stock, he was a brilliant racehorse and was the highest rated racehorse in the world for a time, and he is by a sire of sires.

"This is a lovely individual. He vetted very well and we were at full stretch at that price, but nice horses are always hard to come by, and you have to pay a bit more for the ones you want. We will try and keep him safe and keep him out of trouble, and come back to one of the premier sales back here, but we will worry about that in a few months’ time."

The colt was consigned by Dermot Dwan’s Kellsgrange Stud and is a half-brother to the Group 3 Tattersalls Stakes placed HARROW. The underbidder was Blandford Bloodstock’s Richard Brown, standing alongside Luca and Sara Cumani.

Of the pressure of buying top quality foals, Cullinan continued: "You are up against the smartest people in the world at this job. There are not many jobs that you can be doing that, that when you get out of bed in the morning you are taking on the best in the world.

"The first thing is to find the horses and the second is to buy them. That is a big throw for us, the biggest we have ever given for a foal. We have a small list today and a small list tomorrow, and we thought we'd better get stuck in today!" 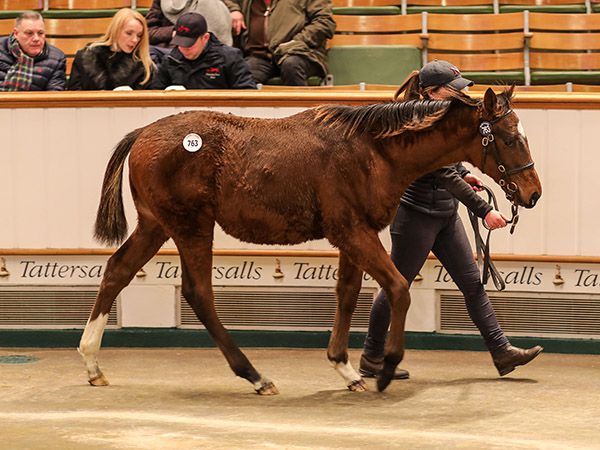 Ballylinch Stud’s resident stallion NEW BAY has enjoyed a breakout year on the racecourse with BAYSIDE BOY, BAY BRIDGE and SAFFRON BEACH all winning Group 1 races and so it is no surprise that his progeny have been in high demand. Leading the way on the second day of the Tattersalls December Foal Sale was the Norelands Stud consigned colt out of Listed Cheshire Oaks second MOORSIDE who was knocked down to Joe Foley for 150,000 guineas.

Foley commented: "We were very keen to buy him obviously, he is by an exciting and emerging sire. We have a very nice two-year-old by him who won well for Karl Burke named Overrule.

"He is a very interestingly bred colt. The mother is by Champs Elysees and she stayed, but he has a lot of speed in his make-up and physically he looks a fast horse. He is a beautifully active colt with a great attitude and the one we focused on today, so we are very pleased to get him."

Norelands Stud purchased MOORSIDE from Juddmonte Farms at the 2017 Tattersalls December Mares Sale for 90,000 guineas, and the stud’s owner Harry McCalmont was naturally delighted: "Moorside was a very good racemare and we bought her off Juddmonte. I have always been a fan of New Bay and we got in at the right time! He is going to be very expensive now. Her first foal by Invincible Spirit is in Hong Kong and the second, also by Invincible Spirit, is with Andrew Balding and they think a lot of him - so it is onwards and upwards!"

The Tattersalls December Foal Sale continues at 10am on Friday, 25th November.