Book 2 of the Tattersalls October Yearling Sale continued in robust fashion on the second day with six lots selling for 300,000 guineas or more and a KINGMAN colt topping proceedings at 525,000 guineas. There were rises across the board with turnover topping 18 million guineas for the second consecutive session.

The top price on the second day of Book 2 of the October Yearling Sale was 525,000 guineas for the KINGMAN colt from Adrian & Philippa O’Brien’s Hazelwood Bloodstock. The son of the Listed winning and Group placed GALILEO mare REEM was knocked down to Juddmonte Farms’ Simon Mockridge after he saw off the effort of John Gosden who trains KING LEONIDAS, this colt’s older brother who topped this sale at 750,000 guineas in 2018 and who is officially rated 103.

Consignor Adrian O'Brien of Hazelwood Bloodstock said: "What more is there to say than, in a nutshell, we are delighted! The full-brother topped the sale three years ago and it is clearly a cross that works. King Leonidas has had a few setbacks, but he is back on track now and he is clearly a very talented horse.

"I am very flattered that Juddmonte has bought a horse of his quality from our farm and delighted for the breeder and for everyone. It is just fantastic, we wish them the very best of luck." 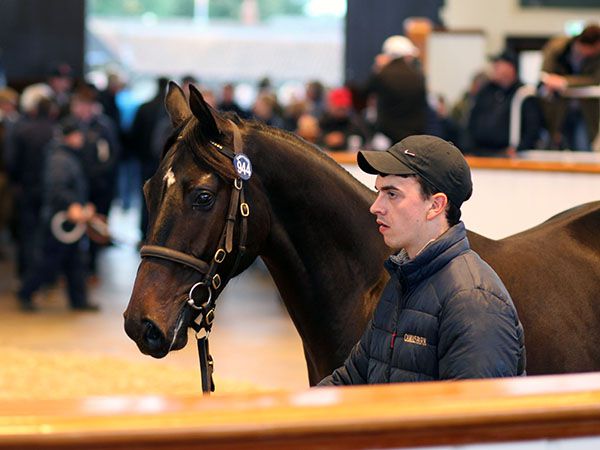 The second highest priced lot on the second day of the Tattersalls October Yearling Sale Book 2 was the NO NAY NEVER colt from Camas Park Stud who realised 450,000 guineas to the bid of agent Ross Doyle. Out of the MIZZEN MAST mare SEATONE, the colt had received a significant update since the publication of the catalogue courtesy of the Ralph Beckett trained filly PROSPEROUS VOYAGE who was second in the Group 1 Fillies’ Mile last week.

"He is a standout, a very good mover and a very nice horse," said Doyle. "I am not 100 percent sure of training plans, they are to be decided. He is just a nice horse, he looks a two-year-old. No Nay Never is a very good sire and he has had a great season." US agent Ben McElroy will be hoping that history repeats itself after buying a KODIAC filly from the draft of Tally-Ho Stud for 340,000 guineas. It was that combination at Book 1 of the Tattersalls October Yearling Sale in 2019 that resulted in the purchase of dual Group 1 winner CAMPANELLE.

"She has been bought for same connections as Campanelle,” revealed McElroy. “I saw her two or three days ago, she has a lot of likeness with Campanelle. She has the scope for a Kodiac filly and is a half-sister to a filly we are familiar with in Ventura Diamond, and her siblings are all well rated. She is obviously by a top sire of fillies, and we have had a lot of luck with the sire."

The filly, who is out of ZAMINDAR mare SHEHILA, is a half-sister to the Listed Bosra Sham Stakes winner and Group 3 Bengough Stakes placed VENTURA DIAMOND and was secured by McElroy after a bidding duel with Anthony Stroud.

McElroy added: "She stands over a lot of ground, I think she is going to be quick. She has a lot of presence and a lot of class, just everything you like to see in a filly. She will go back to America."

CAMPANELLE is owned by Barbara Banke's Stonestreet Stables and trained in the US by Wesley Ward. She won the Group 1 Prix Morny Stakes and Group 2 Queen Mary Stakes as a two-year-old and returned to Royal Ascot this year to win the Group 1 Commonwealth Cup.

McElroy continued: "Hopefully the luck continues, and I think Barbara Banke has already picked out a name for her!" 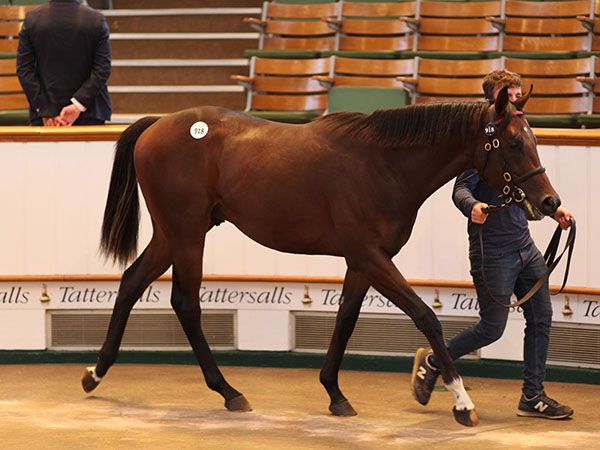 Yeomanstown Stud were celebrating a pinhook success when their ZOUSTAR colt out of the EXCEED AND EXCEL mare RUE CAMBON sold for 310,000 guineas to White Birch Farm & O’Byrne Grassick Bloodstock. The bay colt had been purchased by the O’Callaghan team at last year’s Tattersalls December Foal Sale for 110,000 guineas.

David O'Callaghan of Yeomanstown Stud commented: "He is big, strong and I am delighted that Demi O'Byrne has bought him as he loved him. I thought he was a very good foal out of an Exceed And Excel mare, so a speedy influence to back him up. I was happy to take a chance last year."

The colt is from the first northern hemisphere conceived crop of top class Australian sprinter ZOUSTAR. The son of NORTHERN METEOR stands at Tweenhills Stud and has had three Group 1 winners in Australia to date, headed by triple Group 1 winner SUNLIGHT, winner of the William Reid Stakes, the Newmarket Handicap and the Coolmore Stud Stakes. 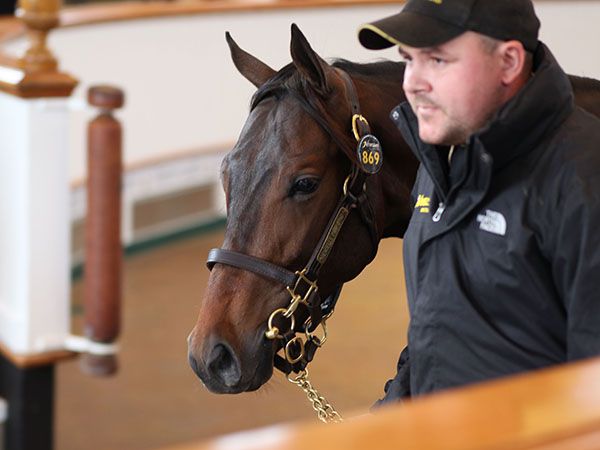 Breeder Robert Barnett and consignor Newsells Park Stud sold the sale-topping SEA THE STARS filly at last week’s October Book 1 sale and both were celebrating again when the SEA THE MOON colt out of PURE SONG was knocked down to Chauvigny Global Equine’s Sebastian Desmontils for 300,000 guineas.

"He will either be trained by Fabrice Chappet or Henri Devin," reported Desmontils, adding: "He is a very correct horse, he vetted well and is by Sea The Moon who has done really well and has got really good stats. The dam has been producing very good racehorses."

"He was made the final cut from our short list and we were fortunate enough to get him. It is very tough to get these horses, we have been outbid quite a few times. We are very pleased, my client really liked the horse and the pedigree as well."

The colt, who is a half-brother to the Group 1 St Leger second ROMSDAL, is a grandson of the Barnett family’s PURE GRAIN, the Champion three-year-old filly whose victories in 1995 included the Yorkshire and Irish Oaks. 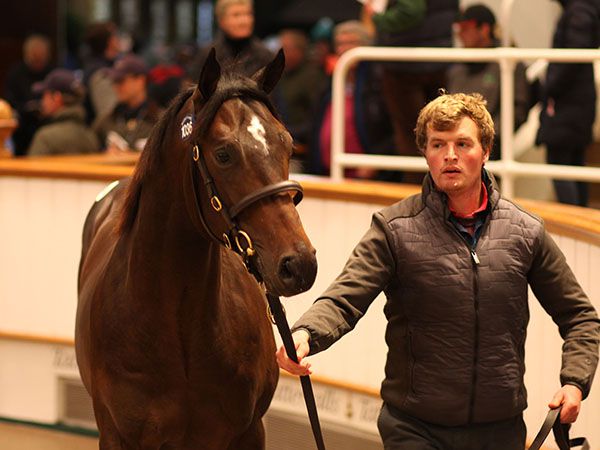 Brother to Asymmetric Sells for 350,000 Guineas

Late in the evening Anthony Stroud struck to secure the GLENEAGLES half-brother to the Group 2 Richmond Stakes winning two-year-old ASYMMETRIC. The colt, who was consigned and bred by Jimmy Murphy’s Redpender Stud, was the subject of a prolonged bidding duel between Stroud and Dermot Farrington, taking instruction from Alex Cole, with Stroud successful at 350,000 guineas.

"Well thanks be to god," said Murphy. "It is the two-year-old that is the reason for that! He has been marvellous all year. But this is a lovely horse himself and the mare is in-foal to Mehmas."

ASYMMETRIC, who was a 150,000 guineas Tattersalls Craven Breeze Up purchase, was also placed in the Group 1 Prix Morny and Group 2 July Stakes for trainer Alan King.

Explaining how he acquired the mare SWIRRAL EDGE, Murphy said: "John Ellis, a man who was friendly with PJ Foley, Joe Foley's father, used to race those horses under the fourth dam years ago with trainer Mark Tompkins. I have followed the family ever since and this was the only way I could get in with a good line as the rest of them were all too weak. I bought her off trainer David Brown."

Book 2 of the Tattersalls October Yearling Sale continues with the third and final session at 10am on Wednesday, 13th October.