A colt by KODIAC was the star of the opening session of the Tattersalls Craven Breeze Up Sale when selling to Dave Loughnane for 525,000 guineas, on a day that saw five lots realise 300,000 guineas or more.

The top priced lot on the opening day of the Tattersalls Craven Breeze Up Sale was the KODIAC colt out of the OASIS DREAM mare NO LIPPY who realised 525,000 guineas to the bid of Shropshire-based trainer Dave Loughnane after a prolonged bidding duel with agent Oliver St Lawrence, standing with Bahraini owner Fawzi Nass.

"I loved everything about him, he is a lovely animal, he is very well balanced, he did an exceptional breeze, the fastest breeze of the lot," said Loughnane. "He just looks an out and out Royal Ascot horse. He has a very good pedigree, his dam was a very good two-year-old for Mark Johnston. I love everything about him, he has a lot of quality and let's hope he can back up on the track, fingers crossed.

Of ownership plans, Loughnane said: "He is for a new British-based syndicate. I didn't think that we would have to go that far for him, I knew he was not going to be cheap, but thankfully I have some owners who are willing to back him. The sire has done it year in and year out and he comes from a very good farm in Tally-Ho Stud."

The colt was consigned by Tally-Ho Stud who stand KODIAC, and who have previously consigned the Grade 1 winner LA PELOSA to the Tattersalls Craven Breeze Up. They had purchased the BHA 88-rated and three-time winner NO LIPPY at the Tattersalls December Mare Sale in 2018 for 20,000 guineas. She is a daughter of the Group 2 Prix de Pomone winner FREEDONIA and a half-sister to the Group 1 Prix Marcel Boussac winner ALBIGNA. 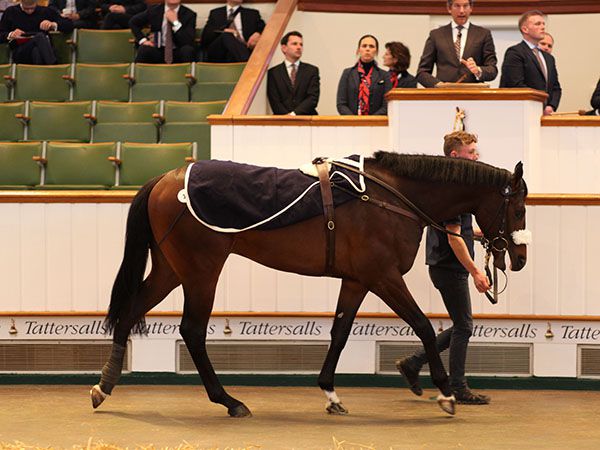 The colt is out of the Grade 3 placed GIANT’S CAUSEWAY mare PINE NEEDLES and was purchased by Durcan on behalf of owner Oliver Harris.

"He is from a marvellous stable and is a smashing looking and moving horse. The vets were happy and he is going into training with Joseph Parr in Newmarket. He is a beautiful stamp of a horse and is for Oliver Harris who has horses with Joseph," said Durcan. "The horse is fairly explanatory, he did smashing breeze. He is obvious and you have to pay for them."

Consignor Norman Williamson, who consigned Champion two-year-old NATIVE TRAIL to the Craven Breeze Up Sale last year, said: "I have to give Mark McStay a mention, I knew I'd had luck with War Of Will [also by War Front and breezed by Williamson] and he said 'Listen there is a War Front colt out here [the US] that has not been sold'.

"Tim Hyde Jnr went out to the farm and took videos and all the rest, so really without Mark we would not have got him."

Williamson said that the colt has a definite likeness to War Of Will, winner of the Grade 1 Preakness Stakes and the Grade 1 Maker's Mark Mile Stakes and now standing at stud at Claiborne Farm.

"He is very similar – action and attitude, he is always fresh and happy with life, which is interesting. If he is as good then we will be more than happy. He is very like him. Size and build-wise for a War Front he is very like him, big and strong and a lot of scope." 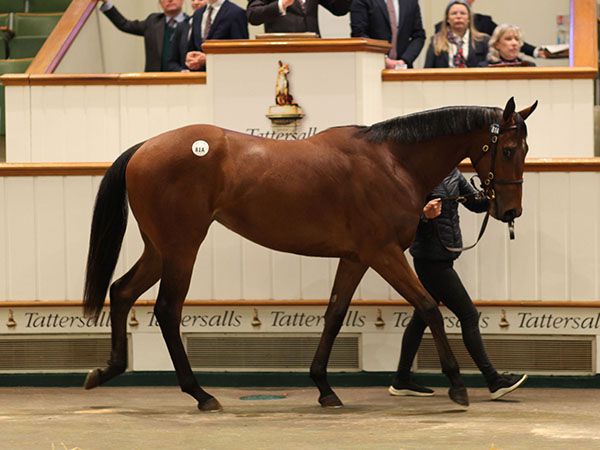 The last lot through the ring on the opening day of the Craven Breeze Up Sale was the wildcard filly by ZOUSTAR who was knocked down to Ross Doyle, stood alongside Richard Hannon, for 400,000 guineas.  The filly is out of the EXCEED AND EXCEL mare SACCHAROSE, a winning daughter of the Listed winner SPINACRE.

"She is outstanding, I have not seen a filly like that for a long time," said Doyle. "She is an unbelievable individual, she breezed well, she comes from a very good home and came highly recommended. She is for a new client."

Explaining why this filly was such a stand-out, Doyle said: "She is just a bit different, you don't see many like that physically. She stands up as a very good specimen. She has a lovely big ear, an honest head, everything is in the right place and she takes everything very easy."

Of ZOUSTAR, whose first northern-hemisphere crop are two-year-olds this year, he said: "We have one or two at Richard's that he likes, and he is obviously a sire sensation Down Under. "

ZOUSTAR is already the sire of 43 Group/Listed performers in Australia including the Group 1 winners SUNLIGHT, ZOUTORI and MIZZY. The filly is from ZOUSTAR’s first Northern Hemisphere crop and was consigned by Aguiar Bloodstock, vendor of last year’s Group 2 Railway Stakes winner GO BEARS GO. The underbidder was David Redvers, who has stood the son of Northern Meteor at Tweenhills in his four seasons at stud in Britain. 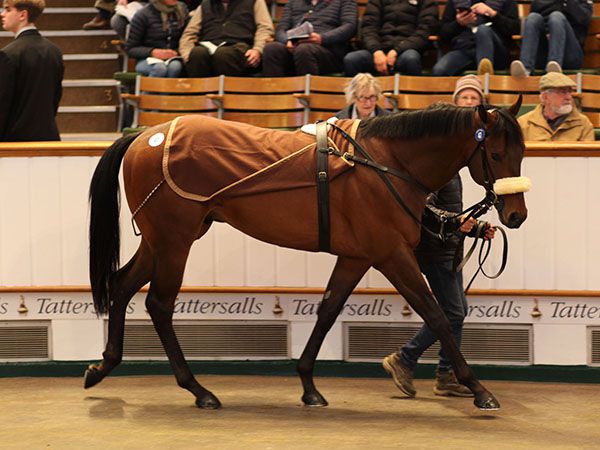 Godolphin purchased unbeaten Champion two-year-old NATIVE TRAIL at the Tattersalls Craven Breeze Up Sale last year and the team will be hoping that lightning strikes twice after they purchased a colt by NATIVE TRAIL’s sire OASIS DREAM for 310,000 guineas.

Consigned by Brown Island Stables, the German-bred colt is out of the DANSILI mare QUEIMADA, a half-sister to the Group 1 winner QUERARI and a grand-daughter of the Champion German filly QUEBRADA. Brown Island Stables’ Johnny Collins purchased the colt for €58,000 on a yearling purchasing mission in Germany and commented;

"The last time I was there I bought three horses, including one called Khan and he went onto win the Group 1 Preis von Europa. It is going to be hard to beat that, though Khan didn't make me any money!"

Collins continued: "He was a beautiful yearling with a great walk, he was of those I was surprised that I got to buy him to be honest. He has been a lovely horse all the way through. He has shown us a lot of speed, but if you go through his pedigree he is probably bred to get a mile or a mile plus. I'll let Charlie Appleby be the judge of that!" 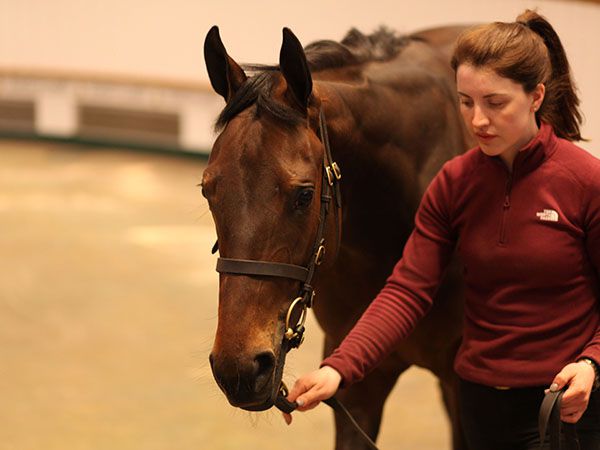 Record-breaking young stallion MEHMAS was purchased by Peter & Ross Doyle Bloodstock for 170,000 guineas at the 2016 Tattersalls Craven Breeze Up Sale and the father and son team secured a filly by the stallion out of the BALMONT mare SOFT POWER for 300,000 guineas. Doyle secured the half-sister to the Group 1 Phoenix Stakes winner EBRO RIVER after seeing off underbidder David Redvers.

"Mehmas again!" smiled Ross Doyle. "He has been very good to a lot of people, including ourselves and the Hannons – we bought him as a breeze-up horse here. He has done magnificently well at Tally-Ho as a stallion – we are huge fans and Richard Hannon is a massive fan."

Of the filly, he said: "She looks like she would do what it says on the tin, hopefully, she looks a real two-year-old and has a very good pedigree. She comes from one of the best homes in the game, there are a huge amount of positives. There is a lot of speed in the pedigree with Slade Power there, too, hopefully she has got a lot going for her.

"She is for an existing client, the long term the plan is to breed from her if she can go as quick as she looks! Hopefully she can get some black-type on the way."

The Tattersalls Craven Breeze Up Sale continues at 5.30pm on Wednesday, 13th April.