A son of LOPE DE VEGA was the star turn when selling for 675,000 guineas on a remarkable second day of Book 2 of the Tattersalls October Yearling Sale, which saw nine lots sell for 300,000 guineas or more, taking the two-day total to fourteen, three more than last year's three-day total.

Anthony Stroud continued his buying spree on the second day of Book 2 of the Tattersalls October Yearling Sale, securing the LOPE DE VEGA colt out of the GALILEO mare LOCH MA NAIRE for 675,000 guineas.

"He is bred on a successful cross – Lope De Vega ex Galileo – he is an attractive horse and beautifully bred, and Lope De Vega has done incredibly well," said Stroud, after buying on behalf of Godolphin.

The colt’s dam is a half-sister to the dual Group 1 winner SIMPLY PERFECT and was offered by Newsells Park Stud on behalf of breeder Andrew Stone’s St Albans Bloodstock.

"The team did a great job prepping him but we have only had him for eight or nine weeks, so credit must go to Andrew Stone of St Albans Bloodstock who bred him and the farm that raised him," said Julian Dollar of Newsells Park Stud.

"In this climate we did not think it would be at all easy, but the market seems to have taken off incredibly this week. I keep thinking there was value last week, but I am not complaining, it is fantastic. Thanks to all the people prepared to take their hands out of their pockets and spend big money on racehorses, long may it continue."

The colt, who Stroud secured at the expense of underbidder Andrew Balding, is the fifth highest priced colt in the history of the October Book 2 sale. 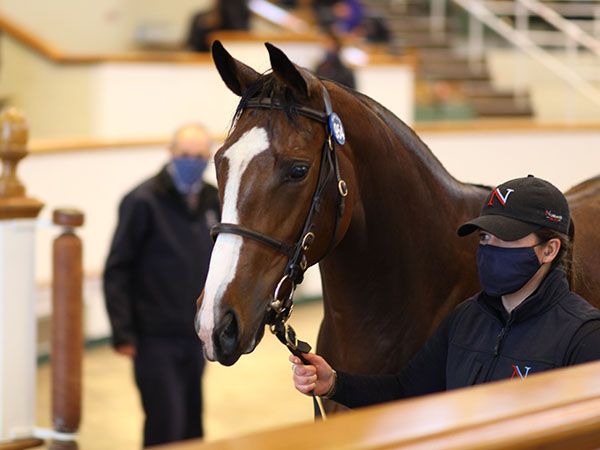 Fairway Thoroughbreds’ John Camilleri, breeder of wondermare WINX, enjoyed a second consecutive day in the limelight when the FRANKEL filly out of LOVE IS BLINDNESS was sold to Hubie De Burgh for 460,000 guineas on behalf of Craig Bernick’s Glen Hill Farm. Like yesterday’s 400,000 guineas KINGMAN colt, Camilleri’s filly was offered by Harry McCalmont’s Norelands Stud.

"She has been bought for Craig Bernick of Glen Hill Farm to go into training with Fozzy Stack," said de Burgh. "We tried all week through Book 1 and could not get anything. This filly is by one of the great sires of the modern era and there are Classic winners in her page, she could be a Guineas or an Oaks filly.

"On top of that she is a beautiful looking filly from a top farm where I keep a lot of stock, and I've known her since she was foaled. I watched her and every time I have seen her she gets better and better and better. As you can see, she is a queen. Now we keep our fingers crossed and hope she is going to be as good as we think she is going to be!"

Of the buyer Craig Bernick, De Burgh added: "Craig is a great lover of the horse industry and is going to be a great breeder, he has got some wonderful stock in Europe already. He wants to collect this quality of bloodstock because he is thinking 20 years ahead, hopefully she will be one of the foundation mares in the broodmare band. Craig is developing an Australian operation, European and American, it is very exciting."

De Burgh rounded off by saying; "You just don't get your hands on fillies like this. She has a bit of Frankel about her, she really walks, has a really good hind-quarter, she is just all quality."

The SIR PERCY mare LOVE IS BLINDNESS is a half-sister to the Group 1 Prix du Jockey Club winner RELIABLE MAN and a granddaughter of the English and Irish Oaks winner FAIR SALINIA. 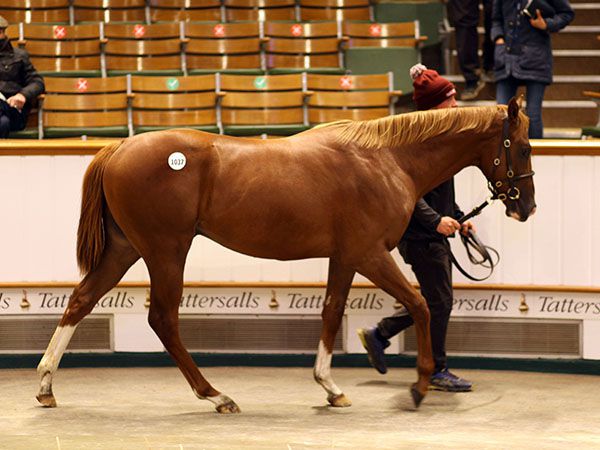 Late in the evening Anthony Stroud secured the NEW BAY colt out of the Listed winning KHELEYF mare NEED YOU NOW for 400,000 guineas, the highest price for a yearling by the son of DUBAWI to sell in the auction ring.

The colt was consigned and bred by Ballylinch Stud who also stand NEW BAY, which delighted managing director John O’Connor.

"We bought the mare at Tattersalls here five years ago," he reported. "We sold a very nice Kodiac filly out of her a couple of years ago who looked very promising.

"I think more of this horse as an individual that caught the eye, when he was down at the barn, when viewers came to see him, he just had an extraordinary action and he is the same when he is lunging, he has a lot of quality.

“The stallions are going well, we are delighted with the way the market is receiving them but the reason they are selling well is they are getting winners in the right places and the right types of tracks and the right stakes races. That is what it is all about in the end – sales should be about racing."

NEED YOU NOW was purchased at the 2015 Tattersalls December Mare Sale by Ballylinch Stud for 275,000 guineas. 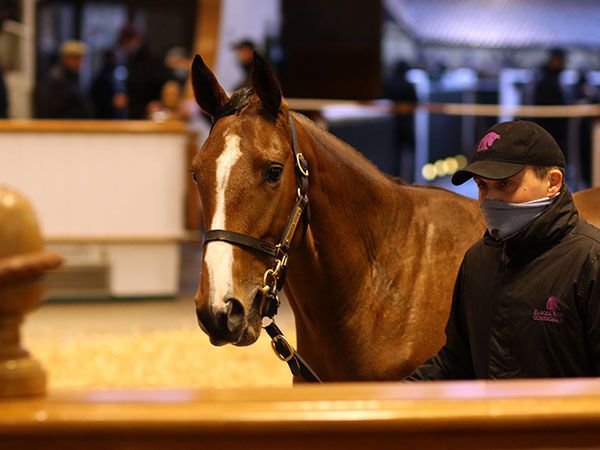 Daughter of Camelot to Gainsborough Thoroughbreds

The Derby winner CAMELOT has enjoyed his best year on the racecourse as a stallion, gaining two new Group 1 winners with budding superstar RUSSIAN CAMELOT winning the South Australian Derby and Underwood Stakes in Australia and EVEN SO winning the Irish Oaks for trainer Ger Lyons.

As such it was no surprise to see plenty of interest in his daughter of the Group 2 placed ORATORIO mare MATORIO, who was eventually knocked down to Gainsborough Thoroughbreds’ Simon Crisford for 340,000 guineas.

The filly, who was consigned by Baroda Stud, was bred by Frank Antonacci and David Reid who purchased MATORIO for 125,000 guineas via agent Mick Flanigan at the 2017 Tattersalls December Mares Sale.

“The mare is at Baroda and she went to No Nay Never but didn't take and transferred to Camelot," said Cox, who added: "Luckily it has all worked out well. She had a No Nay Never colt foal this year and is in-foal to No Nay Never." 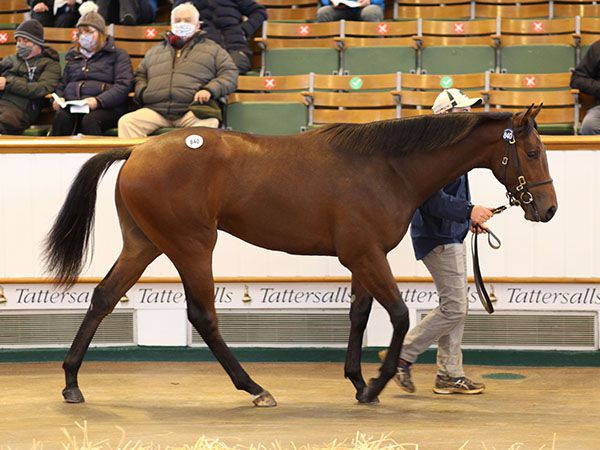 Agent Demi O’Byrne secured two of the lots to sell for 300,000 guineas or more on the second day on behalf of Peter Brant’s White Birch Farm, the first of which was the SHOWCASING colt consigned by Kenilworth House Stud. The son of the ACCLAMATION mare HARLEQUIN TWIST was knocked down to O’Byrne for 310,000 guineas, a substantial return on the 70,000 guineas that Kenilworth House Stud manager Gerry Ross and "a couple of mates" paid for him at last year’s Tattersalls December Foal Sale.

Ross said: "He had a good walk – as auctioneer Alastair Pim said he was one of the best-looking walkers he had seen through the two weeks. A foal will never lose its walk. Hopefully he will go on to fulfil his potential, he has been flat to the board here all week and his last show was as good as his first. He has been a pro so far, hopefully he will continue."

Of the prospects ahead of this sale for a profitable result, Ross said: "A week ago I would never had dreamt of that sort of money, but once you have a couple of big players involved you never know where it is going to end.

"Yesterday's trade was the best trade there has been all year. There was no vendor going into the ring with their chest out, but at least you've a bit more confidence."

Little more than 30 minutes later, O’Byrne struck again when securing a daughter of first season stallion RIBCHESTER for 300,000 guineas. Out of the TEOFILO mare HINT OF PINK, the filly was another success story for Harry McCalmont’s Norelands Stud who bred the filly in partnership with Patrick Robinson, author of the famed bloodstock novel "Horse Trader: Robert Sangster and the Rise and Fall of the Sport of Kings".

"Her half-brother winning in the last week or so was a big plus, timing is everything in this business," said McCalmont. "I am very pleased because she belongs to my good friend Patrick Robinson. A couple of years ago Patrick wrote a book called 'Lone Survivor' which became a blockbuster movie. Patrick decided to retire and take up breeding horses and gave me a few quid to spend on them. I am delighted for him."

Book 2 of the Tattersalls October Yearling Sale continues with the third and final session at 10am on Wednesday 14th October.