The opening day of Book 2 of the Tattersalls October Yearling Sale saw remarkably strong trade with 20 lots selling for 200,000 guineas or more on a day that saw a record turnover, average and median for a session at this sale. The average rose 27% and the median 35% to 89,318 guineas and 70,000 guineas respectively whilst the turnover was up 24% to 18,935,500 guineas.

A colt by NIGHT OF THUNDER proved the star turn on the opening day of Book 2 of the Tattersalls October Yearling Sale when selling for 375,000 guineas to Dwayne Woods, alongside his brothers, trainer Sean and Brook Stud’s Wendyll. The successful team saw off the persistent efforts of Ross Doyle and Richard Hannon, standing with Amo Racing's Kia Joorabchian.

"He is a stunning colt, for me the best colt in the sale," said Woods, adding: "He is very strong, and probably the cleanest Night of Thunder I have ever seen – conformationally, strength, he has it all for me. Rathbarry is a wonderful producer of horses and he goes to Sean."

Sean Woods said of the immediate plans for the colt: "He'll have a bit of time out, and he'll come to us in January at Shalfleet. He is for a client."

The March-born colt is out of HARLEQUIN GIRL, a half-sister to three blacktype horses including Group 2 Gimcrack Stakes winner BLAINE and Listed Two Year Old Trophy victor BOGART. HARLEQUIN GIRL is already the dam of two winners, including his full-sister HANAADY who won at Nottingham last week on her second career start.

"He is a lovely colt, and a horse with a great mind. He is lovely to do anything with, just a pleasure. The full-sister won for Ed Dunlop, which just brought everything together – it has proved that the mare can get a winner by the full-sister, it gave some people some confidence. He looks fast, he vetted very well and everything went according to plan." 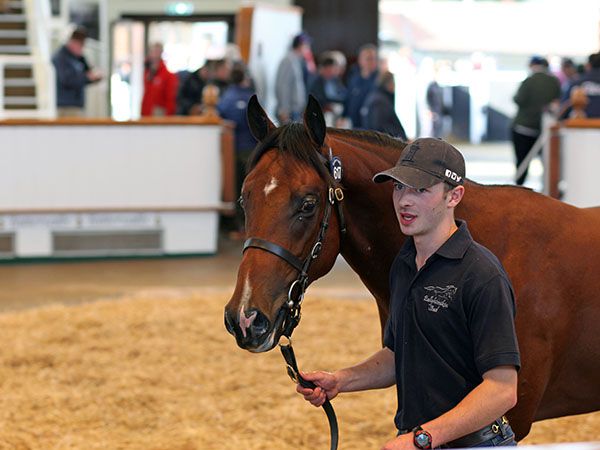 "He's by a great stallion and he's a lovely correct model for what I want," commented Kinane. "That's the first one I've tried on today, but good horses are hard to buy! I bought five last week."

"We bought the mare as a three-year-old in training and sent her to trainer Henri Devin, and she won a Listed race and a Group 3," recalled joint-breeder Stewart.

"We are very happy with the result. He was a really nice first foal, good walking and a good strong individual. It is a nice start for the mare, who is at Ballyhimikin and had a colt by Sea The Stars this spring." 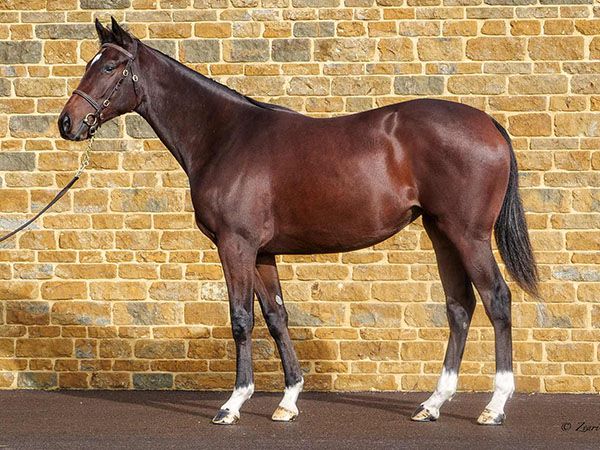 The second lot to realise 300,000 guineas and the second highest priced filly of the day was Appletree Stud’s KINGMAN filly out of the HENRYTHENAVIGATOR mare MIDNIGHT THOUGHTS, with the winning bid struck by Blandford Bloodstock’s Richard Brown. MIDNIGHT THOUGHTS is the dam of three winners from three runners, including the Listed placed TOMORROW’S DREAM. She is from a top class Moyglare Stud family, being out of their Group 2 Ribblesdale Stakes winner IRRESISTABLE JEWEL and a half-sister to the Group 1 Irish St Leger winner ROYAL DIAMOND and Moyglare’s Group 1 Irish 1,000 Guineas second MAD ABOUT YOU.

"It is a fantastic result, in the region of double what we'd thought!" admitted Thornton. "Going into the ring, we knew we had good people behind us, but we didn't expect that! When she went to 150,000 guineas, I thought then we might get to 200,000 guineas, then I did a 'Del Boy'.

"It is a complete credit to Jonny Sutton the stud groom, he has done a hell of a job with her and turned her inside out. If you look at the pictures of her online, and look at her now, and they were only taken ten days ago, she has really changed."

"Appletree’s owner Paul Dunkley is over the moon, he watched it online," smiled Thornton. "It is nice to know that people like John Gosden and Anthony Stroud, the underbidder, have the confidence in the farm. And it is great for the mare and for everybody that she is going into training with John Gosden."

Buyer Richard Brown was equally enthusiastic about the filly's purchase: "She is an extremely attractive filly. She has come from a very good young farm in Gloucestershire. She put up a fantastic show, I have seen her a lot! We were absolutely lights out to get her, but John and I were both extremely keen to get her, and she has been bought for a client of ours."

Brown added: "John thought she was the outstanding Kingman filly in the sale, and so did I, and he probably knows more about Kingman than I! But she is a lovely, classy, elegant filly, and with a proper page. She is gorgeous so we had to go strong." The third highest priced filly on the opening day of Book 2 of the Tattersalls October Yearling Sale was New England Stud’s daughter of LOPE DE VEGA, who was knocked down to SackvilleDonald’s Ed Sackville for 270,000 guineas.

The filly boasts a regal pedigree as the first foal out of the winning INTELLO mare IONIC, a half-sister to PRUDENZIA, the dam of Champion three-year-old filly CHIQUITA and the Group 1 winner and eight times Group 1 placed MAGIC WAND. IONIC is also a half-sister to the Group 3 winner PACIFIQUE and the Listed Lingfield Derby Trial winner ENGLISH KING, who set a record price of 925,000 guineas for a colt in training at last year’s Tattersalls Autumn Horses in Training Sale.

"She is for SBA Racing and goes to William Haggas," revealed Sackville. "She is a lovely filly with a lovely pedigree, and has been bought as a breeding prospect to join the broodmare band. SBA owns the stakes-winning fillies Frenetic and Geocentric."

Late in the evening a daughter of GALILEO provided one of the highlights of the session when selling for 320,000 guineas to BBA Ireland's Michael Donohoe, bidding online on behalf of Yulong Investments, who saw off a persistent challenge by US-based bloodstock agent Justin Casse.

The Manister House Stud consigned filly is out of the Group 3 Cornwallis Stakes and Listed St Hugh’s Stakes winner MRS DANVERS, who also claimed the Weatherby’s Super Sprint when unbeaten in five starts at two. The daughter of HELLVELYN, who was trained by Jonathan Portman,  was bought back for just £1,000 when offered for sale as a yearling but gained a significant public following during her successful two-year-old season. This filly, a May foal, was the first of her progeny to be offered at public auction and Manister House Stud’s Luke Barry commented:

"She is an exemplary filly for her age. She is a good mix of her dam and her sire; she has great quality, looks sharp and Mrs Danvers has put a lot of strength into her. We brought her here to stand out."

Book 2 of the Tattersalls October Yearling Sale continues at 10am on Tuesday, 12th October.