The Tattersalls December Foal Sale finished with a flourish on the fourth and final day with significant rises in turnover, average and median, and two lots realising 110,000 guineas apiece. The session pushed the aggregate for the four-day sale into uncharted territory, breaking the previous record set in 2018 whilst the median was also a record. The top two lots today took the number of six-figure lots for the sale to a record-equalling 82.

Shadwell Estates’ Angus Gold went to 110,000 guineas to secure the MOHAATHER colt out of the EXCEED AND EXCEL mare TIME OF CHANGE from Barton Stud. He is from the first crop of Shadwell’s resident stallion MOHAATHER, the son of SHOWCASING who won the Group 1 Sussex Stakes so impressively for trainer Marcus Tregoning.

Angus Gold said: "Obviously we are a bit biased, Mohaather was a very special horse for us. We thought he was slightly underrated if anything, for me what he did at Goodwood that day in the Sussex Stakes was out of the ordinary, I have not seen a horse quicken like that since Kingman in the same race.

"So we are big fans, and I have liked the stock I have seen. What I particularly like is that leading into this week lots of people have told me that they have a really nice Mohaather foal, which is great to hear. We bought one two days ago, and the vendor told me they had an even better one at home. There are some really good vibes about him."

Of this foal Gold outlined: "I thought this was a really smart horse and a lot of people thought the same. I heard he had ten vets so he was always going to cost a bit. He is out of a half-sister to a horse who ran second in the Gimcrack and this horse looks a sprinter. If he is any good he will be fast and hopefully will be one to get the stallion off to a good start."

The colt was bred by consignor Tom Blain under his own Ickworth Stud banner and Blain commented: "We are really pleased, the mare Time of Change is owned in partnership. It is a great thrill and I am delighted for all involved. It was a bit weird to watch one of our own sell! We bought Time of Change for 9,000 guineas, she is a lovely mare by Exceed And Excel and I know the family as we used to board her dam Purple Tiger, and there is a lot happening under the second dam. She is a good-looking mare and she has thrown an absolute beauty of a first foal so it is really exciting. I think he should make up into a serious racehorse and I just want to thank Angus for his support. It is great that Shadwell and Sheikha Hissa are backing their own stallion. We used him a number of times in the first year so we are really happy."

Talking about Shadwell’s plans, Angus Gold elaborated: "We have bought seven foals. Obviously we sold quite a few mares over the last couple of years and now have around 50. I spoke with Sheikha Hissa and she was keen to get some foals to supplement the racing team, if we could buy at relatively sensible money. Over the last two years it was about getting it all to a manageable size. The family has got a bit more structure to the whole organisation now and I think Sheikha Hissa is just trying to see what sort of size she would like it to be. We will have around 100 horses in training next year and had about 75-80 this year."

"I will be looking at mares next week," smiled Gold and, referencing the addition of BAAEED to the Shadwell roster, added: "If there is anything that Stephen Collins and I think we should be buying to add to the broodmare band, we will chat - we have got a real reason to get some nice mares! I don't know whether the family will want to be at that end of the market straight away, but next week's sale looks a lovely catalogue on paper. We will see what happens." 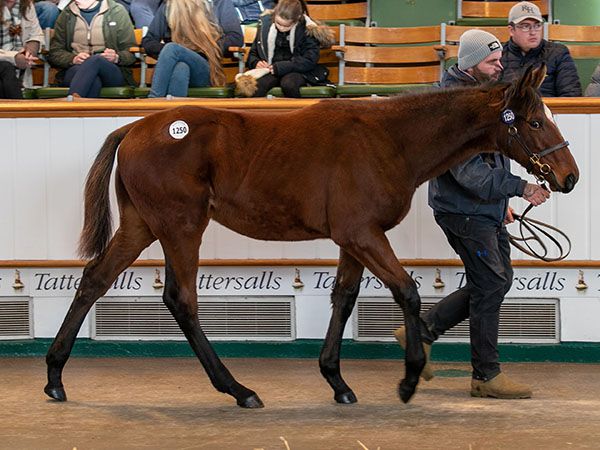 Overbury Stud’s MASAR half-brother to this year’s Listed Lingfield Oaks Trial winner ROGUE MILLENNIUM was knocked down to Yeomanstown Stud for 110,000 guineas to share the session topping spoils. The sale provided a quick and profitable return on an investment made earlier this year at the Tattersalls February Sale.

"Richard Brown bought the mare for me here in February. I was not around and he did it himself," explained Sweeting. "It looked like a chancy buy to start with but the mare was an exceptional racehorse and Rogue Millennium has come along, and everything else has landed into place, too - the two-year-old is now one for one and her Kingman yearling has gone to trainer George Boughey.

"It is definitely a progressive family, but that sale did take me by surprise - but it is a lovely surprise to have! He was a late foal but he has been very straightforward and everything has worked out well."

The Group 3 winning NAYEF mare HAWAAFEZ was bought by Blandford Bloodstock for 14,000 guineas at the Tattersalls February Sale. In May her three-year-old daughter ROGUE MILLENNIUM won the Listed Lingfield Oaks Trial and in June finished second in the Group 3 Hoppings Fillies Stakes, while NAOMI LAPAGLIA, her two-year-old daughter by AWTAAD, won on her debut at Kempton earlier this month.

“Strong yearling sales will always drive demand for foals and the extraordinary strength of the Tattersalls October Yearling Sales has been followed by a Tattersalls December Foal Sale which has achieved significant increases in average and median as well as a record turnover in excess of 35 million guineas. The cream of the British and Irish foal crop has been assembled here at Park Paddocks and buyers at every level of the market and from throughout the world have all contributed to yet another record breaking sale in a year of extraordinary sales at Tattersalls.

“To see so many British and Irish breeders rewarded so handsomely this week reflects the quality of the stock which they have brought to the market and we should thank the consignors for their confidence in the Tattersalls December Foal Sale which consistently showcases the finest foals to be found in Europe. The buyers, whether looking to race or to pinhook, know that the Tattersalls December Foal Sale will satisfy every possible requirement and the competition for quality foals has been unrelenting. In addition to Whitsbury Manor Stud’s outstanding one million guineas sale topping KINGMAN filly, the sale has produced the four highest priced foals in Europe and a record-equalling 27 foals sold for 200,000 guineas or more, all of which has demonstrated the sustained appetite for the best European bloodstock which has been so evident at every Tattersalls sale in 2022.

“While the December Foal Sale is always dominated by the tireless and loyal British and Irish pinhookers, their European counterparts have also made their presence felt, as have a significant number of the world’s leading owners who recognise the December Foal Sale as a consistent source of Classic and Group 1 performers. It is no coincidence that the connections of the Group 1 winning two-year-olds BLACKBEARD and CHALDEAN, both bought at the 2020 December Foal Sale, have again targeted this sale and international buyers from America, China, France, Germany, Italy, Kazakhstan, Spain, Switzerland and from throughout the Gulf region have also made significant contributions, particularly at the top of the market.

“The international influence will without doubt be even stronger as we move on to the Tattersalls December Mares Sale which starts on Monday and features the inaugural Sceptre Sessions for elite fillies and broodmares. We have an exceptional catalogue which includes some of the best race fillies and mares to be offered at public auction for many a year and we look forward to ending the Tattersalls year on a high note."

The Tattersalls December Mares Sale, featuring the Sceptre Sessions, starts at 9.30am on Monday, 28th November. Catalogues are online now and available from Tattersalls and Tattersalls representatives.