Explosive trade on the second day at Book 1 of the Tattersalls October Yearling Sale saw eight yearlings sell for 1,000,000 guineas or more, the highest priced yearling in the world in 2022 and the European turnover record for a day at auction also broken. Whilst the progeny of DUBAWI dominated yesterday, it was yearlings by the remarkable FRANKEL who hit the headlines on day two with four of the top six prices.

The turnover during the remarkable session reached 49,545,000 guineas for the 144 lots sold, which broke the turnover record for any day at a European thoroughbred auction set on the second day of the Tattersalls December Mares Sale in 2017. There were significant increases in the average and median on the second day whilst the turnover jumped a massive 65%. The clearance rate for the day was an impressive 88%.

Leading the way and the highest priced yearling sold in the world this year was the FRANKEL colt out of the DUBAWI mare SO MI DAR who realised 2,800,000 guineas to the bid of Anthony Stroud on behalf of Godolphin. The team were successful despite a sustained effort by Lane’s End Farm’s Bill Farish, sat alongside agent David Ingordo.

"Obviously he has a stallion's pedigree, by Frankel out of a very, very good mare by Dubawi from Watership Down's best family. He was the jewel in the crown and is an extremely nice horse," said Stroud, standing alongside Sheikh Mohammed outside the ring.

"The price was more than I had anticipated but the Sheikh was keen for this horse and Watership does a great job. The underbidders were strong opposition - he is an outstanding horse and he will be a very valuable horse if he is a good racehorse."

The Group 3 Tattersalls Musidora Stakes winner SO MI DAR is a full-sister to the European two and three-year-old champion TOO DARN HOT, the young son of DUBAWI who stands at Godolphin's Dalham Hall Stud in a partnership with Watership Down Stud.

Simon Marsh, general manager of Watership Down, said: "It is an amazing family, it’s an extraordinary thing when you have a horse like that and he fulfils everything you want. He has been an exceptional individual all his life, but these things don't happen by accident, there has been an enormous amount of people involved in getting him here – stud manager Terry Doherty, who has been with us for 30 years, Conor Chapman, who led him up, and Donna Vowles, who is our manager in Ireland, the feed people, the farriers, all these people have to come together to get the horse here today. For him to have done what he did was amazing. We are delighted, it is an incredible family and we are incredibly lucky."

Watership Down Stud’s owner Madeleine Lloyd Webber was obviously delighted and said: "It is always a shame to sell the wonderful stock out of the Dar Re Mi family but we just have to. He is a particularly beautiful colt, he looks so like his father Frankel yet he has the Dar Re Me line and the beautiful head. He walked beautifully, I could not really fault him. We obviously loved him, we are delighted that Godolphin bought him and he is going to stay here and be trained brilliantly. We could not have hoped for anything better really."

The colt’s sire FRANKEL has had a remarkable year, even by his lofty standards, with eight individual Group/Grade 1 winners in 2022 and he has passed both 100 individual Group/Listed winners and fifty individual Group winners quicker than any other stallion in history. 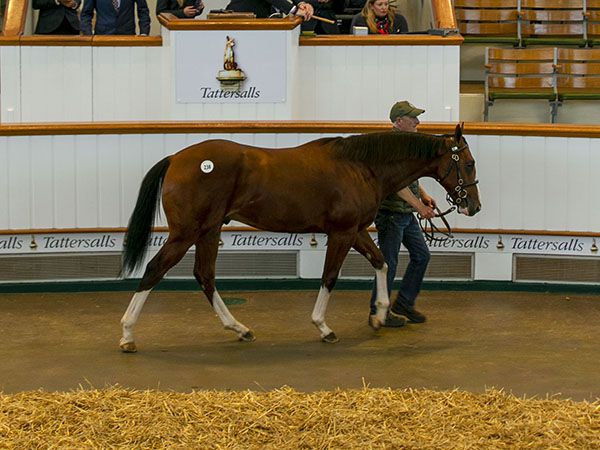 The other FRANKEL colt to realise more than 2,000,000 guineas on the second day was Croom House Stud’s three-parts brother to the Group 1 Grand Prix de Saint-Cloud winner BROOME. The son of the ACCLAMATION mare SWEEPSTAKE is also a three-parts brother to the Group 2 Futurity Stakes winner POINT LONSDALE and was bought by MV Magnier in partnership with Peter Brant’s White Birch Farm for 2,400,000 guineas.

Successful purchaser Magnier commented: "It is a family we know well, Denis Brosnan is a very good breeder and we have had a lot of luck buying from him in the past. Frankel is doing very well and we had the two brothers before and they are two very good horses, let's hope this one is too!"

Joe Hartigan, general manager at Denis Brosnan’s Croom House Stud, was understandably all smiles after the sale: "We thought he'd make a million plus, he is a very nice horse and he had a heap of bids! It was absolutely amazing, I have never witnessed anything like it. He has a great attitude, the same attitude as his brothers." 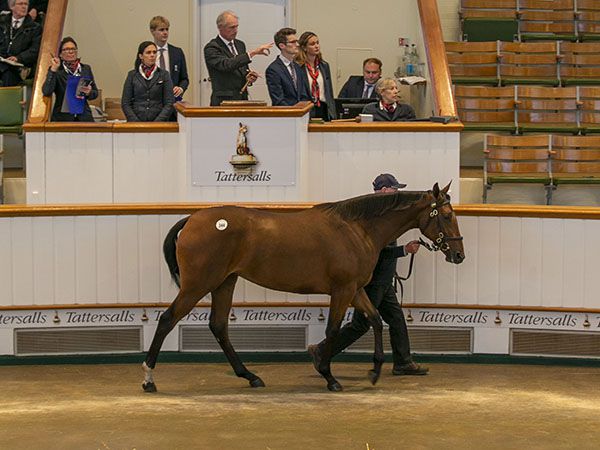 The Tattersalls sales ring filled up early in the evening when the LOPE DE VEGA half-sister to Champion sprinter BATTAASH was offered. Consigned by Paul McCartan’s Ballyphilip Stud, the daughter of the LAWMAN mare ANNA LAW also enjoyed significant updates when the Aidan O’Brien trained two-year-old THE ANTARCTIC won the Group 3 Prix de Cabourg and finished second in the Group 1 Middle Park Stakes.

Bloodstock agent Joseph Burke opened the bidding on the regally bred filly before Amo Racing’s Kia Joorabchian entered the fray as the price rose above 500,000 guineas. High profile US owner/breeder Bobby Flay then joined the battle to secure the filly before Richard Knight finally landed the winning bid of 1,800,000 guineas.

For McCartan it was the first million guinea yearling he had been involved with.

"Yes, this is the first!" smiled McCartan. "I worked for a lot of very good people and always tried to get them a million, when I went on my own I said I'd never be fulfilling that ambition. It is unbelievable to achieve it."

The breeder was delighted to be proved wrong by this filly, but he always had a feeling that she could be the one to realise his ambitions:

"I thought we had a good chance, but everything had to fall into place," he said. "She is a gorgeous filly and the sire is on fire - he has had three Group 1 winners in the last month. And for The Antarctic to do what he has done - he has shown so much promise. I keep thinking back to Battaash – he was only rated 97 when he was a two-year-old, this guy is rated 113 already. The way the Dark Angels improve, alongside the constitution he has to have achieved so much already, and he is in the right hands too."

The successful buyer Richard Knight, who has already signed for ten yearlings for a total of 6,130,000 guineas, said: "I thought she was probably the pick of the fillies in the sale, she is very racy. She is a half-sister to Battaash, The Antarctic, she ticks so many boxes. She is a gorgeous physical and very athletic and I’m delighted to get her. She will stay in the UK, she will be pre-trained and a trainer will be decided at a later stage. She will be a gorgeous filly to breed from at the end of the day." There have been several groups of Japanese buyers in attendance at Park Paddocks this week including leading Japanese trainer Yoshito Yahagi, who managed to secure the DUBAWI half-brother to the Grade 1 winner DIGITAL AGE for 1,600,000 guineas. The colt was consigned by Luca and Sara Cumani’s Fittocks Stud on behalf of his breeder Craig Bennett’s Merry Fox Stud.

The colt is out of the LEMON DROP KID mare WILLOW VIEW, a half-sister to Bennett’s Group 1 Moyglare Stud Stakes winner CURSORY GLANCE.

Yahagi, who has enjoyed globetrotting success as a racehorse trainer including a remarkable Grade 1 double at the 2021 Breeders’ Cup, a first Japanese victory in Australia’s Group 1 Cox Plate and Group 1 success at the Dubai World Cup meeting, was sat with JS Company’s Keisuke Onishi who signed for the horse and commented:  "This colt has the very good aspects of Dubawi."

It will be the first DUBAWI that Yahagi has trained and he said, when asked about possible objectives for the new colt: "I want to win the Arc!" 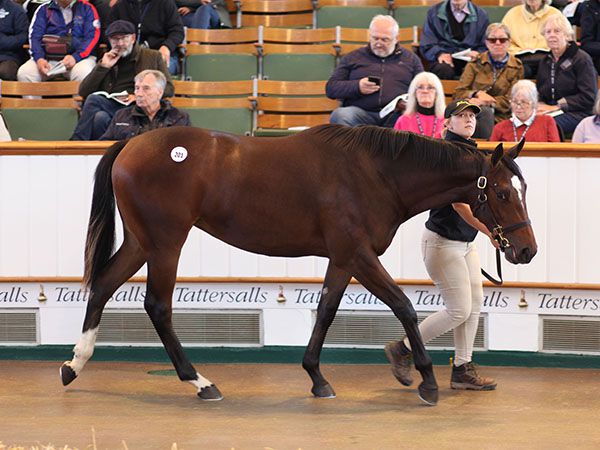 The first lot to break the million guineas barrier on the second day was the FRANKEL filly out of the SHAMARDAL mare SHAMBOLIC who realised 1,500,000 guineas to the bid of MV Magnier in partnership with Peter Brant’s White Birch Farm. The underbidder was Richard Knight, while Simon Mockridge of Juddmonte Farms was involved through to 1,100,000 guineas.

"She is a very nice filly, Frankel is doing very well, Newsells have been very good breeders and a good filly like that deserves to make a good price. She has a lot of quality, and it is a great result for the breeders," commented Magnier.

The filly, who is out of a half-sister to Hong Kong Champion VIVA PATACA and dual Grade 1 winner LAUGHING, was consigned by Newsells Park Stud who co-bred her with Craig Bennett’s Merry Fox Stud. Her dam SHAMBOLIC was purchased by Merry Fox Stud’s bloodstock advisor Gary Hadden at the 2019 Tattersalls December Mares Sale for 800,000 guineas as part of the Floors Stud dispersal, and this FRANKEL filly is her first foal.

The Tattersalls October Yearling Sale continues at 11am on Thursday, 6th October with the third and final session.