The four-day Tattersalls December Foal Sale got off to a solid start on the opening day with a son of IFFRAAJ topping proceedings at 57,000 guineas on a day that saw six lots sell for 40,000 guineas or more. The turnover fell narrowly short of last year’s opening session despite offering 18% fewer foals, whilst the average and median rose significantly by 16% and 60% respectively.

The top lot on the opening day of the Tattersalls December Foal Sale was the IFFRAAJ colt out of the SHAMARDAL mare SORYAH. The colt, who was consigned by James Read’s Selwood Bloodstock, was purchased by agent Ross Doyle for 57,000 guineas.

Doyle commented: "He is a good-looking horse out of a Shamardal mare, and by a top stallion. He is for Pier House Stud and the plan will be to come back to the Tattersalls October Yearling Sale next year."

The Morrin brothers of Pier House Stud will be hoping that history repeats itself after the NIGHT OF THUNDER colt that the Doyles bought for them for 52,000 guineas at last year’s Tattersalls December Foal Sale sold for 250,000 guineas at last month’s October Yearling Sale, Book 2. 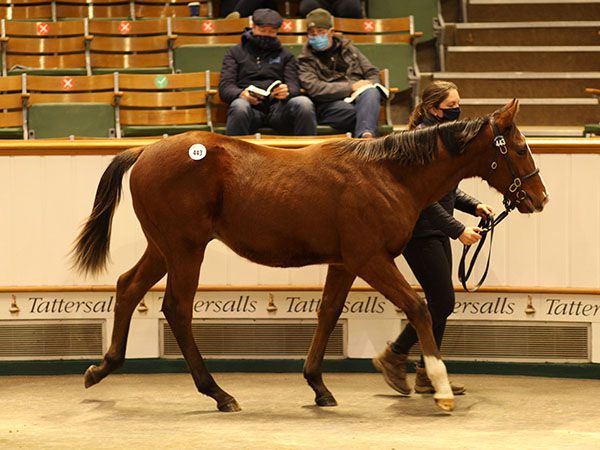 Selwood were celebrating again following the next lot which was knocked down to Ciaran ‘Flash’ Conroy for 50,000 guineas. The OASIS DREAM colt out of the ROYAL APPLAUSE mare TRIPLE STAR was bred by Lady Hardy and hails from the family of five-time Group 1 winner CANFORD CLIFFS.

"He is a nice horse, at the end of the day he is by a proven stallion and he is out of a Royal Applause mare so that is speed," said Conroy. "We will keep him there for the year and we will bring him back hopefully in October for Book 2."

The Tattersalls December Foal Sale continues at 10am on Thursday 26th December.