The Tattersalls February Sale, which was held as a ‘live virtual’ sale without horses or buyers in attendance, saw plenty of competition for the select lots during the second and final session with six lots selling for 50,000 guineas or more and a clearance rate above 80%.

The top-priced lot on the second day of the Tattersalls February Sale was the three-year-old colt FAYATHAAN who was knocked down to Italian agent Marco Bozzi for 85,000 guineas. The son of MEHMAS has won two of his last three starts and is on a career-high BHA rating of 86.

Successful purchaser Bozzi said: "He is going to Italy to be trained in Milan by Mr Biondi and is for owner Mrs Roveda.

"This is a nice horse, we vetted him and he ticked all the boxes. He is a good performer, a sharp horse and should suit seven furlongs or a mile in Italy."

It was a profitable sale for trainer Mark Loughnane and owner Kulbir Sohi who purchased the colt at the Tattersalls Autumn Horses in Training Sale last October for 40,000 guineas.

Hannon Secures Clay For Davies to Remain in Yard

The lightly raced three-year-old CLAY is set to stay in the yard of trainer Richard Hannon after the East Everleigh-based trainer secured the colt for 71,000 guineas on behalf of owner John Davies. Bred by The Rt Hon Lord Rothschild and owned in training by Nat Rothschild, CLAY was sold today as part of the complete dispersal of Waddesdon Stud.

The Tattersalls telephone bidding operators were at full capacity as the son of SIXTIES ICON out of the SEEKING THE GOLD mare TAMSO was offered, with bidders on the live internet bidding platform also making their presence felt.

"Richard has been very good to us, and Clay will be staying with Richard," said Davies. "If Clay continues to progress and becomes the horse that Richard thinks he will, he should make up into a Saturday horse."

CLAY is a half-brother to three winners, including the Australian Listed winner HIGH CHURCH. His second dam is the Group 1 Prix de la Salamandre second MOST PRECIOUS, the dam of three Group winners, the best of which was MATIARA, winner of the Group 1 Poule d'Essai des Pouliches and the Grade 1 Ramona Handicap.

CLAY has run four times and has been placed on three of those starts, only finishing out of the placings on his debut. His last run in a 1m2f novice stakes at Lingfield saw him finish second behind TAMBORRADA, a progressive son of DUBAWI who is unbeaten in two starts and already on a rating of 91. 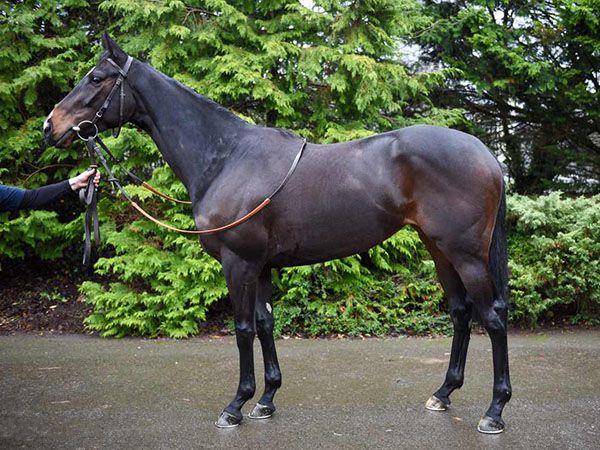 At Ease Set to Continue Career in the US

There were only four lots on offered from the draft of Juddmonte Farms and the most sought after was the four-year-old filly AT EASE who was knocked down online to BBA Ireland’s Michael Donohoe for 70,000 guineas.

A winner over a mile last year as a three-year-old, AT EASE is by the stud's leading broodmare sire OASIS DREAM and is out of JOSTLE, winner of the Grade 1 Alabama Stakes, the Grade 1 American Oaks and four further graded races. She is the dam of eight winners, including two US stakes winners and a stakes performer.

Donohoe said: "She is for a current client and she is going to race in the US, there are no plans regarding her trainer as yet. She is lightly raced, she has a US pedigree and her siblings went on from three to four. She looks a good physical too."

Donohoe had not personally seen the filly but said: "Her videos and photos were very good, and Juddmonte, as always, has been very forthcoming with information. You'd always rather see the horse yourself, but we all have to do what we can in current times."

“Not for the first time in recent months the most important message to convey is one of sincere thanks and gratitude to vendors and purchasers alike for responding so positively to changes and disruptions to the traditional Tattersalls sales format. The collective support we have received throughout the pandemic continues to be an inspiration and cannot be underestimated.

“This is the first time we have had to utilise the ‘live virtual’ format for a sale at Park Paddocks and, apart from fervently hoping it will be the last time, overall the process has worked very well. Feedback from vendors and purchasers has been overwhelmingly positive with the vast majority of buyers using the live internet bidding platform which served us so well last year. Crucially, the quality of the videos and photographs supplied by the vendors has been of a high standard and additional information also available on the Tattersalls website has facilitated the buying process and given the necessary confidence for people to participate from throughout the world. The February Sale has again demonstrated how readily the Tattersalls worldwide client base has embraced our online services and we will be continuing to develop and invest in the Tattersalls online platforms which have served the industry so well in recent times.

“In recognition of the difficulties which we all continue to face under the current lockdown conditions, we will be staging an additional mixed March fixture taking place March 31st and April 1st here at Park Paddocks for which entries are now being taken. At this stage the intention is for the Tattersalls March Sale to take place conventionally, in compliance as ever with any prevailing COVID - related protocols, and timely announcements will be made if it becomes necessary to make any changes to these plans.”