Book 2 of the Tattersalls October Yearling Sale got off to a strong start with five lots selling for 300,000 guineas or more and a son of KINGMAN topping proceedings at 400,000 guineas.

The fireworks started early during the opening day of Book 2 of the Tattersalls October Yearling Sale, with the KINGMAN colt out of the RIP VAN WINKLE mare ALLEZ Y selling for 400,000 guineas to Godolphin. The granddaughter of Champion European three-year-old filly L’ANCRESSE was bred by John Camilleri’s Fairway Thoroughbreds and consigned to the sale by Harry McCalmont’s Norelands Stud.

"He is a very nice horse, nice horses are easy to sell, and there is a strong market for nice horses," admitted McCalmont. "The dam Allez Y is going to Australia, she belongs to John Camilleri, who bred Winx, and is in-foal to Lope De Vega on southern hemisphere time. I am delighted I have sold a good horse for him, very happy."

The son of KINGMAN is one of seven yearlings on offer in Book 2 by the in-demand stallion and was knocked down to Anthony Stroud after he saw off the efforts of Irish trainer Joseph O’Brien.

"He is from Norelands who do a fantastic job, he is a well-balanced horse, moved well and we have had a lot of luck with Kingman – Palace Pier and Persian King. He will go to France to be trained by Andre Fabre," reported Stroud.

ALLEZ Y is a half-sister to the Group 3 winning FRANKEL colt MASTER OF REALITY, who is trained by Joseph O'Brien and is as short as 22/1 for this year’s Melbourne Cup. 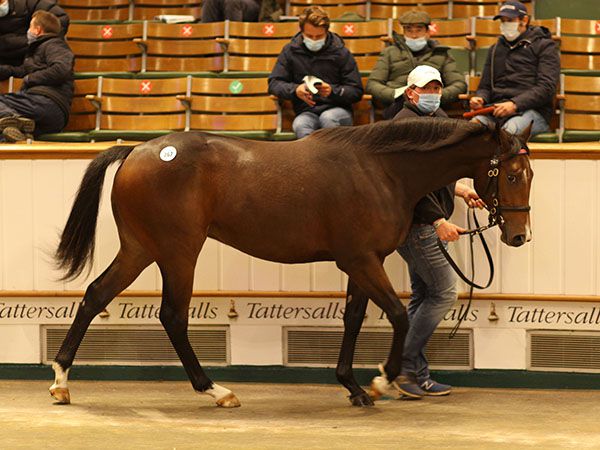 The top filly on the opening day of October Book 2 was the daughter of consignor Yeomanstown Stud’s resident stallion DARK ANGEL who was knocked down to David Redvers for 390,000 guineas. Out of the EXCEED AND EXCEL mare EXTRICATE, the filly was already a full-sister to the Listed winning filly DARK LIBERTY but received a timely catalogue update when her KINGMAN half-sister QUEEN OF LOVE won the Listed Prix Coronation at Saint-Cloud last month.

"I thought she was lovely," said Redvers. "She joins Qatar Racing and is one for the long term for our breeding plans. She looked all speed, she is a little cracker."

David O'Callaghan of Yeomanstown said: "She is a beautiful filly, very fast looking. She is a full-sister to the Listed winner Dark Liberty and a half-sister to a very promising filly in Queen Of Love." Newsells Park Stud were celebrating when their daughter of first season sire CHURCHILL out of GEORGE WASHINGTON’s only foal DATE WITH DESTINY sold for 350,000 guineas. The three-parts sister to the Group 3 winner BEAUTIFUL MORNING, who realised 1,400,000 guineas at the Tattersalls December Mares Sale in 2018, was knocked down to Stroud Coleman’s Anthony Stroud after he saw off AMO Racing’s Kia Joorabchian stood alongside Robson Aguiar.

Julian Dollar of Newsells said: "When we bought Date With Destiny some people asked us if it was because of that rarity value, but it really wasn't. We'd had some luck with the family before, and Flawly was one of the first mares we bought and she produced Best Name – she was one of the best mares we had early on in terms of sales and as a producer. We were very fond of the family so when the opportunity came to buy a bit more of it, we came in with her.

"We mated her to Galileo and she produced a lovely filly in Beautiful Morning, so we went to the son. The Churchill was an interesting mating, going back to something familiar but to put in a bit more speed and precocity, the mare herself was quite precocious." 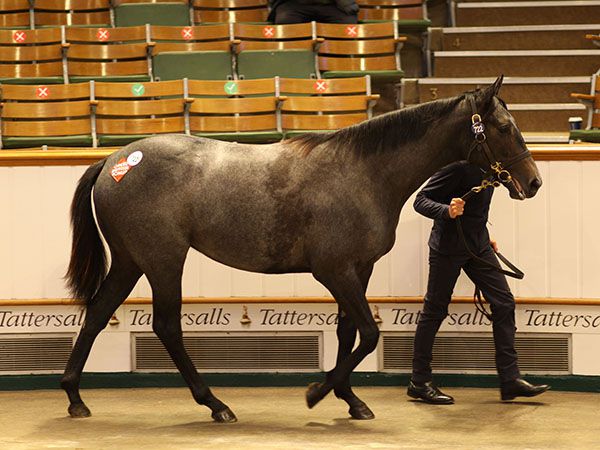 SackvilleDonald’s Alastair Donald struck for the regally-bred DARK ANGEL filly consigned by Highclere Stud at 350,000 guineas. The filly is the first foal of the unraced REDOUTE’S CHOICE mare DELEVIGNE, the daughter of MODEL QUEEN and a sibling to the Group 1 Haydock Sprint Cup and Group 1 Prix Maurice de Gheest winner REGAL PARADE as well as the Group 3 Acomb Stakes winner ENTIFAADHA and the Group/Listed placed HOT PROSPECT and MOUNT HELICON.

"I loved her, she is my favourite filly in the sale," said Donald. "We stretched a bit to get her, everyone was on her. She walks for fun, it is a lovely family to be involved with and there is probably more happening in it as well. She is for King Power Racing." 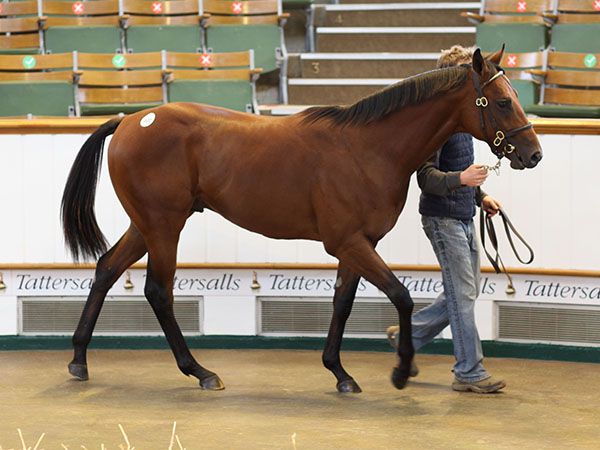 First season stallion MEHMAS, who stands at Roger O’Callaghan’s Tally-Ho Stud, has been enjoying a stellar year with his first runners which have included the Group 1 Middle Park Stakes winner SUPREMACY, the Group 2 Gimcrack Stakes winner MINZAAL and the Listed winners ACKLAM EXPRESS and METHOD and so it was no surprise when his son from Cregg Stud realised 320,000 guineas.

"I think you can describe Mehmas as a revelation!" said purchaser Tom Goff of Blandford Bloodstock.

Goff, who had been standing next to football agent Kia Joorabchian of AMO Racing in the bidders' area added: "I think a lot of people wrote him off at the beginning of the year as cheap speed, and he has defied all of that! This is a lovely, lovely colt and I had a brief to buy a horse to hopefully make up into a sharp two-year-old, and he fits the bill. He is out of an Exceed And Excel mare, he is a beautifully topped colt, he has a great action and looks rapid. John Gosden will train."

The son of the EXCEED AND EXCEL mare ASHTOWN GIRL is a half-brother to the Stakes-placed ZIARAH from the family of Group 2 Temple Stakes winner HOT STREAK and is the most-expensive yearling by MEHMAS to sell at public auction to date.

John Noonan of Cregg Stud, said: "I'm delighted for the O'Callaghans. He's been the busiest horse at the sale. The mare has been very lucky for us, I didn't sell her as a yearling but she's been good to us since. She's in-foal to Ribchester at the moment, I bought her dam here at the December Sale and I bred her. I have ten Flat mares and five NH – I'm a NH man through and through really."

Book 2 of the Tattersalls October Yearling Sale continues at 10am on Tuesday 13th October.