The four-day Tattersalls December Foal Sale got off to a strong start on the opening day with two lots sharing top honours at 80,000 guineas, turnover up 19% to 3,128,300 guineas and significant increases in the average and median.

The top priced filly and equal top priced lot on the opening day of the Tattersalls December Foal Sale was a daughter of BATED BREATH, bred and consigned by Yvonne Jacques’ Carisbrooke Stud, who was knocked down for 80,000 guineas to Blandford Bloodstock’s Tom Goff on behalf of Wardley Bloodstock.

Goff revealed: "She has been bought for stud owner Rupert Gregson-Williams who has a lovely farm in Surrey, an establishing and growing farm. She is a beautiful filly from a very good farm and with a lovely back pedigree. She has loads of class and quality, a good body and good movement. She could race or could come back here next year. We will see how she progresses through the year."

The filly is the second foal out of the winning SHAMARDAL mare NAQAAWA, fourth in the Listed John Musker Stakes for owner-breeder Shadwell Estates and bought by Jacques and Brian Grassick Bloodstock’s Cathy Grassick for 180,000 guineas at the 2018 Tattersalls December Mares Sale. Out of the Listed Cheshire Oaks winner HAMMIYA, NAQAAWA is a half-sister to the Listed winner SHAQIRA and the Listed runner up ADHWAA, the dam of this year’s Group 3 Strensall Stakes winner ALFLAILA.

"She is by Bated Breath and I am breathless," laughed Jacques. "The Shamardal/Danehill cross has worked really well, Hello Youmzain is bred on a similar cross, and it was important to give the mare a solid start with a proven horse. She went to Showcasing first time and that yearling is with Andy Oliver."

She added: "She is a beautiful mare. I would love to keep all my stock but it is not practical so we try and sell a few foals. The mare is not in-foal but is going to Dark Angel this spring." Sharing joint honours as the top priced lot of the opening day of the Tattersalls December Foal Sale was Brook Stud’s son of first season sire MOHAATHER, who realised 80,000 guineas to the bid of Joe Foley.

“He looks a weapon," said delighted purchaser Foley. "He looks a lot like his grandsire Showcasing and is a really good example. He is a lovely colt and the mother was good. She was rated 90 and was useful. We bought a Ribchester filly from the same family here in October. I underbid Mohaather as yearling - he was a really high class racehorse and we were very keen to buy one by him."

Of future plans, Foley added: "He looks like a racehorse and we will try and make him a racehorse - when he was getting to 40 to 50,000 guineas he started to get into racing money!"

Brook Stud’s Dwayne Woods was equally delighted with the sale and commented:

"He's a dinger! He was bought by superlative judges, and he is a horse who will go forward and make up into a proper yearling."

The colt was bred by Jon A. Thompson out of the winning MAYSON mare LADY FREJYA, a half-sister to dual Listed winner PARTY BOSS and multiple Grade 1 winning hurdler COUNTRYWIDE FLAME. 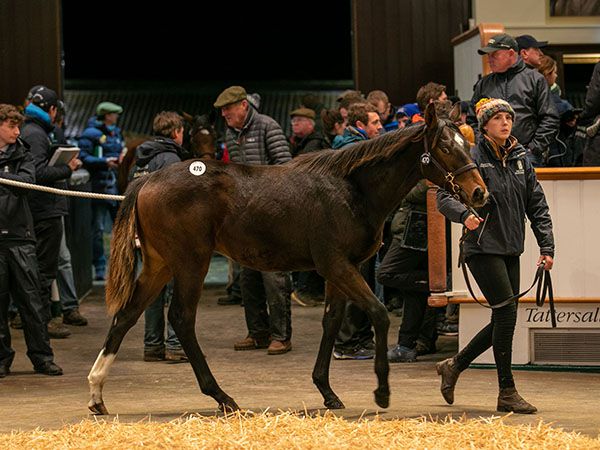 Earlier in the evening a colt by another first season sire had been the subject of an equally spirited bidding duel when Charles Shanahan, signing under the Glenvale Stud banner, saw off the attentions of persistent underbidder Tally-Ho Stud to secure Selwood Bloodstock’s SERGEI PROKOFIEV colt for 72,000 guineas.

"The sire seems to be getting gorgeous looking horses from what we have seen," said Shanahan. "He was obviously in training at Ballydoyle and it was thought he had an awful lot of potential. From the stock that we have seen, we thought it would be great to get one looking like the one we’ve bought. We are thrilled to get one that looks like he does - he is a great mover, loads of scope, loads of strength, everything you look for in a foal that you want to sell on as a yearling. He was definitely the one we wanted to buy today.

"I am so impressed with his stock. ‘Flash’ [Conroy] collected one earlier today so we are very keen on the sire and let's hope for everyone he can kick on over the next two years. This colt goes back to Ireland and Glenvale."

The March-born colt was bred by Selwood and Seascape Bloodstock out of the DUTCH ART mare MUSIC LESSON, the dam of a winner from her only runner to date. MUSIC LESSON is a half-sister to three Group/Listed performers and is from the family of Champion miler and five-time Group 1 winner CANFORD CLIFFS. Some of the fiercest competition of the sale’s opening day came for the first foal in the ring this week by first season sire EARTHLIGHT, a colt consigned by Barton Stud on behalf of Ladyswood Stud. Bids flew thick and fast from around the ring but it was Yeomanstown Stud’s David O’Callaghan, who had led the bidding from the start, who emerged triumphant with a bid of 65,000 guineas.

"He is a cracking colt. Bred at Ladyswood which is a lovely farm and they are great people, we love selling for them," said Tom Blain of Barton Stud. "He came here and performed well, and we got a good price. I hope Yeomanstown does well with him. I have seen him throughout the year, he has been with us for five or six weeks and has been very straightforward and very professional. He is just a really nice type, and I like the stock by Earthlight that I have seen."

The colt is out of the INVINCIBLE SPIRIT mare SOME SPIRIT, runner up in the Group 3 Fairy Bridge Stakes and an own-sister to ONE SPIRT, winner of the Listed Whitehead Memorial Stakes and placed in three Group races. SOME SPIRIT is the dam of two winners from two runners and descends from exceptional racemare and producer PARK APPEAL, the dam of influential sire CAPE CROSS and granddam of IFFRAAJ and Champion sprinter DIKTAT.

The Tattersalls December Foal Sale continues at 10am on Tuesday 24th November.