The catalogue also features own and half brothers and sisters to 128 Group and Listed winners headed by the SEA THE STARS half-brother to dual Group 1 winning sprinter LIMATO. A DUBAWI half-brother to multiple Group winner TROPBEAU, the MAGNA GRECIA half-brother to Group 2 Coventry Stakes winner NANDO PARRADO and the BLUE POINT half-sister to this year’s Group 2 Duke of Cambridge winner INDIE ANGEL are amongst other highlights, as well as full siblings to an array of top class performers including ANGEL POWER, BODHICITTA, CALL ME LOVE, FOX CHAMPION, THE TIN MAN, UNDER THE STARS and WONDERFUL MOON. 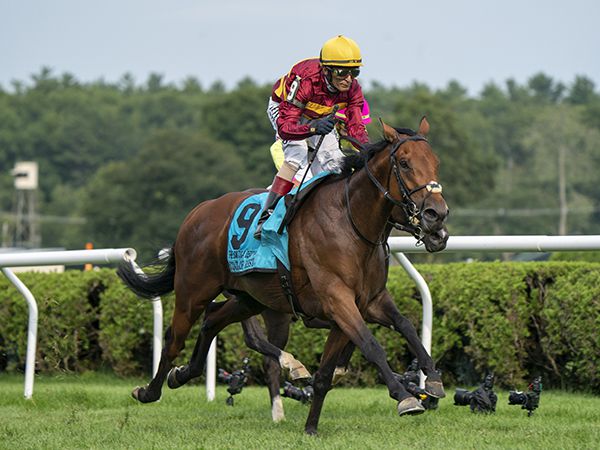 State of Rest flew the flag for the December Foal Sale internationally with an American Grade 1 victory in the Saratoga Derby
As ever, first crop sires feature prominently with a total of 21 represented including Classic and Group 1 winners ADVERTISE, BLUE POINT, CRYSTAL OCEAN, EQTIDAAR, FLAG OF HONOUR, MAGNA GRECIA, MASAR, PHOENIX OF SPAIN, STUDY OF MAN, TEN SOVEREIGNS, TOO DARN HOT and WALDGEIST.

Top French based sires KENDARGENT, LE HAVRE and SIYOUNI are also well represented, as are the two US Triple Crown winners AMERICAN PHAROAH and JUSTIFY.

The largest consignment is the team of 50 foals coming from Richard Kent’s Mickley Stud, followed by the 37 catalogued from Barton Stud and 33 from the Castlebridge Consignment. Norelands Stud, leading consignor at the 2020 December Foal Sale, has a team of 23 foals. Newsells Park Stud will offer a high quality consignment of 20 foals, including a KINGMAN colt out of the Group 3 winner and 1,000 Guineas placed QABALA, a SIYOUNI colt out of the Group 3 winner PELLIGRINA and the aforementioned INVINCIBLE SPIRIT colt out of French 1,000 Guineas winner TEPPAL.

"The Tattersalls December Foal Sale is a prolific and consistent source of Group 1 winners as well as spectacular pinhooking triumphs and we have some truly outstanding foals catalogued for this year’s sale. As ever the December Foal Sale has attracted the cream of the British and Irish foal crop, with all of the current top ten active British and Irish sires well represented, and the catalogue has the quality and diversity to appeal to buyers from throughout the world at all levels of the market."