The Tattersalls December Foal Sale came to a close on the fourth and final day with the sale continuing in robust fashion and a colt by SIOUX NATION topping proceedings at 88,000 guineas. A strong final day clearance of 78% saw turnover for the sale of 26,255,100 guineas, at an average of 41,807 guineas, the fifth highest at the fixture, and a median of 20,000 guineas.

The top priced lot on the final day of the Tattersalls December Foal Sale was the SIOUX NATION colt out of the INVINCIBLE SPIRIT mare AUTUMN SNOW who sold for 88,000 guineas to agent Alex Elliott. The colt is from the first crop of the son of SCAT DADDY who won the Group 1 Phoenix Stakes and Group 2 Norfolk Stakes at Royal Ascot as a two-year-old.

"He is probably for resale, but is a colt we'd be happy to keep too," said Elliott. "I love the Scat Daddy line, he is becoming a real sire of sires and Sioux Nation was a fast horse."

The colt was sold by Barton Stud on behalf of breeder The Brigadier Partnership, which is headed by Rebecca Matthews.

"He was the stand-out foal today, we deliberately came today to sell on the Saturday to stand out and it is a fantastic result. This was an investment by the breeders to get a bloodstock business going so this is really a great start," said Barton’s Tom Blain. "I am delighted for them."

AUTUMN SNOW was purchased for just 1,500 guineas at the 2018 Tattersalls February Sale by Matthews. She is out of the Listed placed LOMITAS mare EPIC SMILE, herself a half-sister to the Group 1 Prix Jean-Luc Lagardere winner ULTRA. 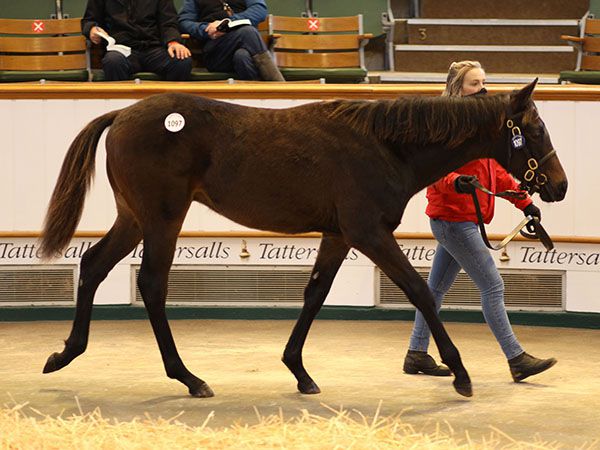 Australia Colt to Houldsworth for 62,000 Guineas

Bloodstock agent Matt Houldsworth secured the AUSTRALIA colt out of the DIKTAT mare BITOOH for 62,000 guineas on behalf of Aughamore Stud.

"We have bought him for resale and will aim to bring him back to Book 1 or Book 2. It is a smashing family, a quality family, and has been in the Pocock family for a long time. I am quite a big fan of the stallion, he has had a good year," said Houldsworth.

BITOOH is a half-sister to the Group 1 Melbourne Cup winner REKINDLING and was bred by consignors Stringston Farm. The Somerset-based stud sold her as a foal here in 2005. She was subsequently bought by Sheikh Mohammed and Godolphin for whom she raced before being resold to Sunderland Holdings as a breeding prospect in 2009. Stringston Farm’s Robert and son Nick Pocock then bought BITOOH back two weeks after REKINDLING’s Melbourne Cup victory.

"The plan will be to send Bitooh back to Australia, the family does very well with him and he is a lovely horse to deal with," said Nick Pocock.

“We felt that the relative strength of the Tattersalls October Yearling Sales would provide a solid platform for the December Foals and this has been borne out by another 2020 sale at Park Paddocks which has held up remarkably well under the current circumstances, and particularly considering the continued widespread travel restrictions.

“Despite having the smallest Tattersalls December Foal catalogue since 2001, with 191 fewer foals catalogued than last year, the sale has achieved turnover just over 10% below last year’s lofty returns and single digit declines in average and median. Not for the first time this year we can reflect on a market which has displayed extraordinary and commendable resilience, most graphically illustrated by a clearance rate which compares favourably not only with 2019, but also with the majority of recent renewals of Europe’s premier foal sale.

“Trade has been competitive throughout the week, starting with sustained demand for the yearlings and flowing consistently through four days of the cream of the British and Irish foal crop. As ever the sale has been dominated by pinhookers and we applaud them for their huge contribution, but even more so in this strangest of years. The sale has been conducted under the strictest of health protocols and the compliance and awareness of all the rules and regulations has been admirable, as has the acceptance that we have not been able to provide the full Tattersalls sales experience in the current environment.

“Nevertheless, we have sold 64 foals for 100,000 guineas or more this week, including Airlie Stud’s outstanding sale - topping DUBAWI colt whose 700,000 guineas price tag is the second highest for a colt foal at this fixture. In addition to the individual highlights, we have had widespread participation, some of it online, from buyers from throughout Europe, Japan, North America and the Gulf region, all of which gives encouragement as we turn our attention to the annual showcase of Europe’s finest breeding stock at the Tattersalls December Mares Sale."

The Tattersalls December Mares Sale starts on Monday 30th November at 9.30am and continues until Thursday 3rd December.