The catalogue for the 2022 Tattersalls July Sale can be viewed online at www.tattersalls.com and will be published on Thursday 16th June. Numbering 852 lots, the sale comprises 721 horses and fillies in/out of training and 131 broodmares, six of which have foals at foot. Taking place Wednesday, July 6th - Friday, July 8th the three day sale features high class consignments from many of the world’s leading owner-breeders including Cheveley Park Stud, Coolmore, Godolphin, Juddmonte Farms, Lanwades Stud and Shadwell Estates.

Amongst the highlights of the broodmares on offer is undoubtedly the Group 1 Matron Stakes winner CHACHAMAIDEE, herself the dam of Group 3 winner and dual Group 2 placed KLASSIQUE, in foal to exciting young sire MOHAATHER. The daughter of FOOTSTEPSINTHESAND will be consigned by DVA Equine Services alongside her GALILEO daughter FOR HENRY, a full-sister to KLASSIQUE, in foal to ADVERTISE.

The Godolphin draft at the July Sale is always highly sought after and this year looks set to be no exception with high class lots amongst the Godolphin consigned broodmares including German Champion filly and multiple Group winner ANTARA, the dam of Group 3 winner ALGIERS, in foal to dual European Champion PALACE PIER. Others of note include the Listed winner FOUNTAIN OF TIME and BALSAMINE, a daughter of European Champion BALANCHINE, who are both in foal to exciting young sire EARTHLIGHT. ETRURIA, a winning full-sister to Group 1 winner and 2000 Guineas runner up TERRITORIES, is also catalogued in foal to the same sire. CONCORDIA, the dam of Group 1 winner POLARISATION, and AUTUMN LILY, the dam of Group 1 runner up BOTANIK, are catalogued in foal to PALACE PIER and MASAR respectively.

Well-bred fillies amongst the Godolphin consignment include SWEET WHISPER, by DUBAWI out of dual Group 1 winner GONBARDA, the dam of European Champion FARHH. Other daughters of Group 1 winners include CARNIVAL GIRL, by NEW APPROACH out of Yorkshire Oaks winner PUNCTILIOUS, and NAASMA, by CHURCHILL out of Falmouth Stakes winner MUSIC SHOW. Two well-bred daughters of DUBAWI certain to attract interest are CHERADI, a half-sister to Group 1 winner and sire TERRITORIES, and AGENT SONYA, a daughter of the three time Group 2 winner and Group 1 runner up VERY SPECIAL. 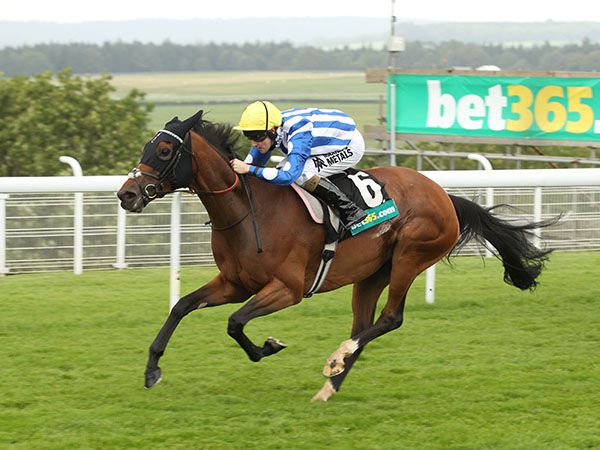 The draft from Shadwell Estates contains several eye-catching broodmares including RAAQY, a Listed placed daughter of Champion filly NATAGORA by DUBAWI, and BAQQA, a SHAMARDAL full-sister to three time Group 1 winner DUNBOYNE EXPRESS, in foal to PINATUBO and MOHAATHER respectively. MUDAWANAH, a DANSILI sister to three Group/Listed winners out of the Oaks third RUMOUSH, is catalogued in foal to BLUE POINT. Juddmonte Farms will offer the Listed winner ZAMINAST, a half-sister to the top-class FAMOUS NAME and three further Group and Listed winners, in foal to BATED BREATH.

Other mares from high profile families include Baroda Stud’s FORMAL AFFAIR, a half-sister to Group 1 winners MAKE BELIEVE and DUBAWI HEIGHTS, and Barton Sales’ SHINING BRIGHT, a GALILEO full-sister to this year’s Chester Vase winner and Derby fifth CHANGINGOFTHEGUARD out of Grade 2 winner LADY LARA, in foal to STARSPANGLEDBANNER. The Castlebridge Consignment will offer several well-bred mares including FOOTPRINTS, a GALILEO full-sister to joint European Champion three-year-old ARMORY in foal to WOOTTON BASSETT, SARITA, a daughter of GALILEO and dual Oaks winner SARISKA in foal to TEN SOVEREIGNS, and ALMANGARA, a daughter of ALMANZOR and dual Grade 1 winner ANGARA in foal to WALDGEIST.

Buyers focused on horses in training look equally well catered for with an abundance of winning proven and unexposed performers amongst the 721 horses in/out of training catalogued. The lightly raced four-year-old colt STOWELL, placed in the Group 2 Queen’s Vase for John & Thady Gosden and third in the Group 3 John Porter Stakes this season, is among the older horses with smart recent form as well as Group performers AGITARE, ACE AUSSIE and MEHMENTO.

Promising lightly raced three-year-olds include the Charlie Hills trained TUSCAN, who has won two of his six starts and boasts an official rating of 105, and the Ken Condon trained WARREN BEACH, a half-brother to Group 1 winner HERE COMES WHEN and Timeform-rated 95 after impressive wins in his two most recent starts. GRENOBLE was beaten only a head in his most recent start on the Derby undercard at Epsom and is Timeform-rated 98 for William Haggas’ Somerville Lodge, and Juddmonte Farms will offer the INVINCIBLE SPIRIT colt CULCOR who broke his maiden by three and a quarter lengths on his most recent start at Gowran Park and is out of HOT SNAP, a Group 3 winning and Group 1 placed half-sister to the Champion mare MIDDAY.

Eye-catching lots amongst the fillies in training are the Listed winner DIMA, runner up in Listed company on her most recent start and consigned by Jamie Railton, and Hilal Kobeissi’s three-year-old MEHMAS filly ROLLING THE DICE, third in last year’s Group 2 May Hill Stakes. Other well-bred fillies to feature include Gainsborough Thoroughbreds’ BEAU RIVAGE, a half-sister to Group 1 winner BEST OF DAYS, East Everleigh Stables’ SAY GOODNIGHT, a half-sister to last year’s Derby and St Leger runner up MOJO STAR, and AMZAAN, a daughter of DUBAWU and Group 2 Park Hill Stakes MEEZNAH consigned by Rathmoy Stables. Juddmonte Farms will offer their customarily strong draft of well-bred fillies including CAPTIOUS, a winning FRANKEL half-sister to Group 1 winner EPICURIS, CONVECTION, a winning daughter of OASIS DREAM out of a sister to Group 1 winners TIMEPIECE and PASSAGE OF TIME, and PLUPERFECT, a daughter of INVINCIBLE SPIRIT out of a winning half-sister to European Champion KINGMAN.

“Quality and diversity are the hallmarks of the Tattersalls July Sale which has long been established as Europe’s premier midsummer sale and this year’s catalogue holds plenty of appeal for buyers from throughout the world, whatever their requirements. In 2021 mares bought for as little as 8,000 guineas from the July Sale produced Group 1 and 2 winners in America, Australia, Canada, Dubai, Great Britain and Japan and this year’s Tattersalls July Sale catalogue features the usual compelling combination of well-bred fillies and in foal mares as well as high class horses in training, all of which look set to attract plenty of interest from domestic and international buyers alike.”