The top lot on the final day of Book 2 of the Tattersalls October Yearling Sale was the STARSPANGLEDBANNER colt out of the CADEAUX GENEREUX mare VIOLET’S GIFT, who was knocked down to Stroud Coleman’s Anthony Stroud for 360,000 guineas.

The half-brother to the Listed-placed KODIAK WEST was consigned to the sale by James Hanly’s Ballyhimikin Stud.

"We felt he was a very special horse all the way along, he has been special always, and we love Starspangledbanner," said Hanly. "I just want to thank Helen and Frisk [Jones] who do the daily hard work for minding this horse so well.

"This is a family we have had for ever, we bred every single horse on the page. They are all very fast horses so hopefully this one will continue and will add to the family. It is lovely to be able to show horses such as this, it is a pleasure to be around them. Please god he is a good runner." 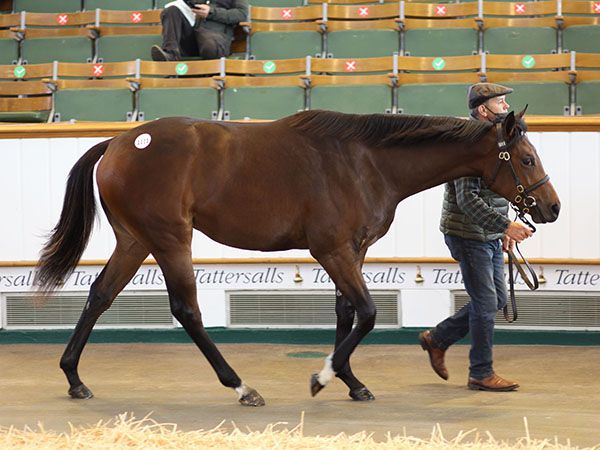 The progeny of first season sire and 2,000 Guineas winner CHURCHILL have been in great demand this week and his daughter of the HOLY ROMAN EMPEROR mare PUSSYCAT LIPS was the most sought after, realising 340,000 guineas to the bid of Simon Crisford.

"She is a lovely filly, very racy and athletic, and she showed herself off well," said Crisford. "MV Magnier really loved her, she will be for a Coolmore partnership."

The Grade 3 placed PUSSYCAT LIPS has produced four winners from her four runners, including the Group/Listed placed pair SPECIAL PURPOSE and ROULSTON SCAR.

The filly was bred and consigned by Croom House Stud, whose principal Denis Brosnan commented: "It was a wonderful sale and we are thrilled with the price, and we’re happy that she’s been bought by MV Magnier and will be going to Simon & Ed Crisford." Mastercraftsman Filly to Magnier for 325,000 Guineas

Cormac McCormac struck for the MASTERCRAFTSMAN filly consigned by Denis McDonnell’s Parkway Farm for 325,000 guineas on behalf of MV Magnier.

The filly is a daughter of the KALANISI mare SIMKANA, dam of the three-time winning and Listed placed SIMANNKA and a half-sister to the dual Derby winning Champion SINNDAR.

McDonnell, who also bred the filly, said: "She has got a Ribchester filly foal and is in-foal to Zoffany. I bought Simkana out of the Aga Khan's after she had foaled Simannka. This is a nicer filly than Simannka; she was a grey filly, she was bought by Paul Makin for €200,000 and was shipped to Australia. She was supposed to be a Group filly, but never ran." Prince Khalid Abdullah’s Juddmonte Farms struck for the first time this week when securing the OASIS DREAM colt out of the ZAMINDAR mare PURE LINE for 310,000 guineas. Newsells Park Stud consigned the colt on behalf of the breeder W. & R. Barnett Ltd who raced the granddam PURE GRAIN, the Champion three year old filly in England in 1995 and winner of the Irish and Yorkshire Oaks.

"He is the spitting image of Oasis Dream at this stage. This is an incredible horse, a great walker. He is bred on the same lines as Kingman, he was an obvious horse for us," said Simon Mockridge of Juddmonte Farms.

Mockridge added: "Once he is broken then we will let everyone know about his trainer. We are hoping he is going to be a good horse." Cregg Stud’s John & Denis Noonan will have plenty to celebrate following an October Book 2 Sale to remember. The Fermoy-based team brought two colts to the sale and reaped 320,000 guineas for their MEHMAS youngster on Monday and 300,000 guineas for their KODIAC colt today to the bid of Anthony Stroud on behalf of Godolphin.

"I am gobsmacked at the minute," said a clearly emotional John Noonan, checking his phone to see all the congratulation messages, including one from his son who is based in Dubai and had watched online. "I always knew they were a pair of lovely colts, and that is why they have come here. This is better than winning the Lotto!

The colt is out of the TEOFILO mare SUPREME OCCASION, a two-time winner who was fourth in the Group 2 May Hill Stakes as a two-year-old. She is a half-sister to the two-time Group winner DECADO, the pair out of PIRIE who the Noonans purchased at the Tattersalls December Mares Sale for 11,500 guineas back in 2004.

Noonan concluded: "I was hopeful of a good week, there were my two bankers! A lot of work went into them both, and this horse was an easy horse to do. I wish Godolphin the best, he is a lovely colt."

At the conclusion of Book 2 of the 2020 Tattersalls October Yearling Sale, Tattersalls Chairman Edmond Mahony commented;

“At the conclusion of Book 1 of the Tattersalls October Yearling Sale last week we expressed our sincere thanks to all those who contributed to a yearling sale which, although conducted amidst a backdrop of global turmoil, performed with remarkable resilience. The message at the conclusion of Book 2 of the October Yearling Sale is very similar. We are enormously grateful to every single participant over the past three days, not only for their individual contributions to a sale which has held up remarkably well under the circumstances, but for working with us every step of the way in our efforts to stage the sale in as safe an environment as possible. The COVID pandemic continues to wreak havoc in all walks of life and to have conducted nine sales here at Park Paddocks since the last week of June is a mighty achievement by all concerned and could not have happened without a huge collective effort.

“Newmarket is very much the hub of the European racing and breeding industries and the last few weeks have demonstrated that, despite all the obstacles, business has been able to continue, albeit at lower levels than in recent years. Newmarket has an extraordinary and unique infrastructure and never more has this been apparent than at Books 1 and 2 of the 2020 Tattersalls October Yearling Sales.

“Book 2 has without doubt benefitted from the momentum established at Book 1 and similar to last week, the buyers have consistently remarked on the quality of the stock being offered. As ever the consignors from Britain, Ireland, France and Germany have presented us with a catalogue of genuine quality and the buyers have demonstrated that, even in these challenging times, there is a global appetite for quality bloodstock and the sport of horseracing. Participation from throughout the Gulf region continues to be hugely influential and the sustained involvement from American, Australian and Hong Kong interests has also been notable alongside determined domestic involvement. Tomorrow we move on to Book 3 of the October Yearling Sale which is another Tattersalls yearling sale that consistently attracts buyers at all levels of the market and we will conclude the 2020 Tattersalls October Yearling Sale on Saturday with Book 4.”

Book 3 of the Tattersalls October Yearling Sale starts at 10am on Thursday 15th October.