The Tattersalls Guineas Breeze Up Sale concluded with the third highest turnover in the sale’s history with 150 two-year-olds changing hands for just short of 4.5 million guineas, an average of almost 30,000 guineas, a median of 24,500 guineas and a clearance rate of 82%. The Guineas Horses in Training Sale had earlier seen 24 horses in training exchange hands for 262,500 guineas.

Blandford Bloodstock’s Richard Brown secured the top-priced lot of the Guineas Breeze Up Sale when going to 135,000 guineas to land the son of the first crop sire and multiple Group 1 winner POSTPONED. The colt is out of the MALIBU MOON mare MICAELA’S MOON, a half-sister to the dam of Champion two-year-old and exciting stallion NO NAY NEVER. Brown secured the colt despite the persistence of underbidder Anthony Bromley, stood alongside trainer Alan King.

"He is for my resale syndicate Never Say Die, and will be trained by David Simcock," said Brown. "A client bred Postponed so I have followed him all the way through and I am giving him a big chance.

"I don't see this horse running until August or September, he is a horse for the future. I just thought he is a smashing horse."

Explaining the ownership syndicate, Brown said: "The syndicate is all about resale. We aim to sell as three-year-olds. There are great people involved in the syndicate and I think they will be really excited with this horse."

Of the colt's breeze, Brown enthused: "He did a cracking breeze. He just showed a great action, it wasn’t a speedy breeze but it was the style he did it in, he has a good attitude."

The sale represented a great success for Glending Stables’ Roderick Kavanagh, with the colt having been purchased at the Tattersalls December Foal Sale for just 20,000 guineas.

“He was bought by my Dad (Peter Kavanagh) and Michael Downey, and we’ve always really liked him," recalled Kavanagh. "He’s a racehorse and he was such a good pull-out outside the boxes. He did an impressive breeze for his size and the date of birth he has, and he really fills the eye. He was very popular and he never let us down from start to finish."

He added of the son of Postponed: "He is a lovely horse and all the agents were on him, all the big dogs as you’d expect. I think there were five or six bidders on him.” 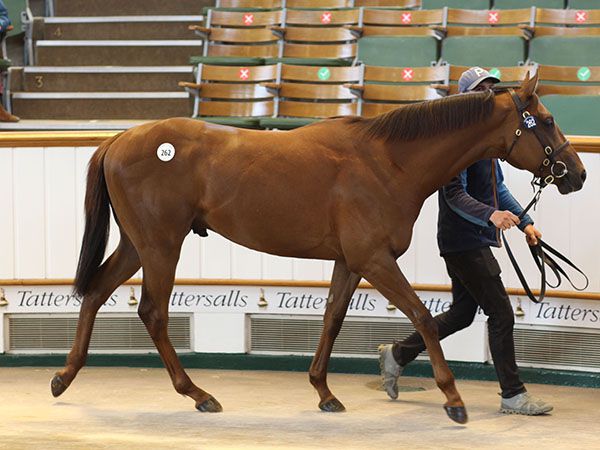 The MEHMAS colt out of the MILK IT MICK mare CHEWOREE for was the second lot to sell for a six-figure value when knocked down to David Redvers for 105,000 guineas on behalf of Sheikh Fahad.

The colt’s sire, who stands at Tally Ho Stud, has enjoyed a sensational start to his stud career and the successful purchaser David Redvers said of his plans: "He will be trained in Newmarket, Sheikh Fahad [who lives in Newmarket] wants to see him trained locally and close by. The horse did a very good time, he is by a very good sire and he is a lovely model, it is a great touch for the vendor."

The vendor was Irish-based National Hunt jockey Ian McCarthy who owned him with two friends, the trio purchasing him as a foal for €3,000 as a yearling pinhook prospect but that plan failed to come to fruition.

"Derek McCormack pinhooked him as a foal for €3,000, it is lucky enough now that he was not sold as a yearling!" smiled McCarthy. "I prepped him for us, he has been very straightforward. As time went on he just developed, he got much stronger and through the last eight weeks he has really turned a corner – he takes his work well."

"He is a horse who has had a great preparation and we've liked him all along," continued McCarthy. "We've had plenty of interest in the last couple of days, he did a lovely breeze ridden by Micky Cleere and he is by the right sire, isn't he?" 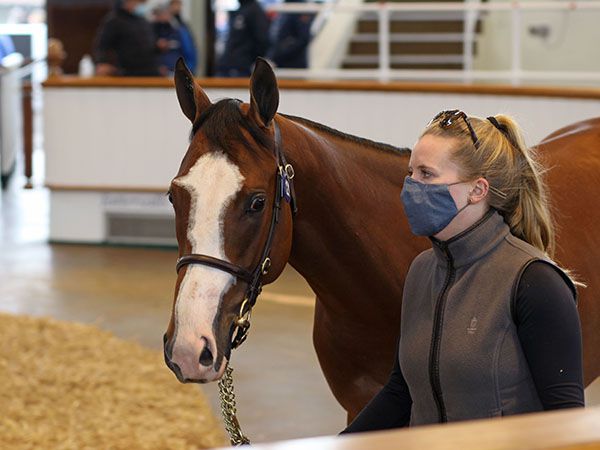 County Kildare-based trainer Michael O'Callaghan was busy during the Guineas Breeze Up buying eight lots for 409,000 guineas headed by the MAGICIAN colt out of MISS FRANGIPANE from Aguiar Bloodstock that realised 95,000 guineas.

"The Magician is a lovely horse, he did a good breeze and was very professional. He came highly recommended, everything was right about him, he had a good vet, the whole lot. He is bred to be a miler, but he has plenty of pace as well so we will kick on with him. A nice type of horse," said O'Callaghan.

Of decisions about purchasing plans, O'Callaghan said: "You can't train a piece of paper! Physical is everything when it comes to training, especially long term for me; we are a commercial operation and trade on and I can't remember when someone asked me for the pedigree of a good horse in training, there is such a good market for them.

"If you have a pedigree and a page and then if it matches the physical it makes a horse very expensive, pedigree is the one thing that I will make allowances for."

The sale was a profitable one for consigner Robson Aguiar who purchased the two-year-old at last year’s Tattersalls Ascot Yearling Sale for just 14,000 guineas. The sale has been rebranded the Tattersalls Somerville Yearling Sale this year and will be held at Park Paddocks. Nortonthorpe Boy to Saudi for 55,000 Guineas

"He has been bought for Saudi Arabia," said Durcan, who bought on behalf of Abdullah Al-Khashan.

"He will have a break here now and then will ship to Saudi Arabia. A tough, hardy and sound horse, he should be ideal for racing there."

At the conclusion of the 2021 Tattersalls Guineas Breeze Up and Horses in Training Sale, Tattersalls Chairman Edmond Mahony commented;

“A median bettered only once this decade at the Tattersalls Guineas Breeze Up Sale combined with an average and turnover which both compare favourably with the 2019 and 2020 renewals are all positives to take from today’s sale, as has been the consistent domestic demand at all levels of the market. Similarly, while not quite matching the unprecedented levels at the recent Craven Breeze Up Sale, the clearance rate has also held up well, especially considering a significantly larger catalogue than usual and the disruption to overseas participation owing to the current widespread travel restrictions.

“We can also reflect on a Guineas Breeze Up Sale which has produced numerous impressive pinhooking triumphs, as ever reflecting the expertise of the consignors, and another sale which has underlined the importance of the Tattersalls live internet bidding platform which has yet again proved to be invaluable, particularly for overseas buyers unable to attend the sale. COVID continues to test us all, but once more we have experienced trade of remarkable resilience and a collective determination from all involved to explore every avenue to provide as vibrant a market as possible in the face of considerable obstacles.”