Book 1 of the Tattersalls October Yearling Sale finished with a flourish with three lots selling for 1,000,000 guineas or more and turnover above 30,000,000 guineas for the second day in a row. Sale turnover, average and median all showed increases on last year as did the clearance rate of 83%.

The top priced lot on the final day of Book 1 of the Tattersalls October Yearling Sale was the SEA THE STARS filly out of the EXCEED AND EXCEL mare BEST TERMS who realised 1,500,000 guineas to the bid of Anthony Stroud on behalf of Godolphin. The filly was consigned by Newsells Park Stud on behalf of breeders Robert and Ann Barnett, who were at Park Paddocks to see their filly sell.

"We have always loved this filly," reported Barnett. "The family has been good to us, and it goes a long way back now. Best Terms boards at Newsells and she was great fun on racecourse.

"She is the most athletic yearling we have had for quite some time, you see her walking around the ring and she really has a very athletic walk. She has a lovely attitude, she is very laid back, she didn't fidget at all in the chute but when she gets going she gets going!"

He added: "There seems to be a good trade for well-bred fillies and breeders are buying them to race and breed from, which is nice to see."

Buyer Anthony Stroud said: "Needless to say she's from a very good farm, and she's just very athletic. Godolphin has had a lot of success buying fillies from this sale and she looks like one who could run well over a mile and a half and is the type we are looking for. I think this catalogue has been a bit short on fillies, and this was probably our pick.

"Coolmore was the underbidder, and I believe Juddmonte was in, and they are both fantastic judges which shows how valuable these fillies are. We've pulled up on a few horses this week by Frankel, Sea The Stars and Kingman, but sometimes you have to put your head down and go for it."

BEST TERMS was the Champion two-year-old filly in England in 2011 following a pair of Group 2 victories in the Queen Mary Stakes and Lowther Stakes. Her progeny include the Listed winning filly STAR TERMS who was third in the Group 1 Prix Marcel Boussac and FRESH TERMS, a Listed winning daughter of NEW APPROACH. The pedigree stretches back to the Champion four-time Group 1 winning mare TIME CHARTER, who was bred and raced by the Barnett family. 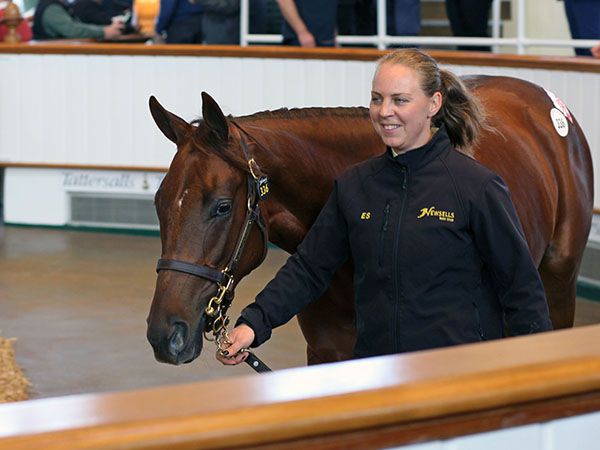 The fireworks during the third and final session started with the very first lot in the ring, the DUBAWI half-sister to the Group 1 Prix de l’Arc de Triomphe winner WALDGEIST. The Newsells Park Stud consigned filly was offered on behalf of a partnership between the farm and co-breeders Gestut Ammerland.

Interest in the regally bred filly came from all corners of the ring with Oliver St Lawrence and Bertrand Le Metayer both making bold plays to land the blueblood, but as the price passed 1,000,000 guineas it was left to Baroda Stud’s David Cox and Juddmonte Farms’ Simon Mockridge to battle it out with the former successful with a winning bid of 1,250,000 guineas on behalf of Al Shira'aa Farms.

Al Shira'aa Farms is a wide-ranging equine concern founded by Sheikha Fatima Bint Hazza Bin Zayed Al Nahyan from Abu Dhabi. Its base in Ireland is at Meadow Court Stud, formerly part of Abbeville Stud and bought by the new owners in 2016.

"She is by Dubawi and I’m delighted to get her," said Cox. "She is going to Meadow Court and they are looking forward to racing her and breeding from her in future. The Sheikha is very keen to extend the broodmare band and these Group 1 families are difficult to get into."

Al Shira'aa Farms has enjoyed a good year on the track; the headline act MUTAMAKINA trained by Christophe Clement and the winner of the Grade 2 Dance Smartly Stakes at Woodbine in August and the FRANKEL filly RUMI, winner of the Group 2 Prix de la Nonette at Deauville.

"We are delighted that she sold so well. We obviously felt that she deserved to sell well as she is a very sweet filly from a wonderful family and a wonderful mare. If you were looking for a mare to start a big breeding operation, a Dubawi out of a Monsun mare and a half-sister to an Arc winner is an obvious place to start! We wish them every luck." 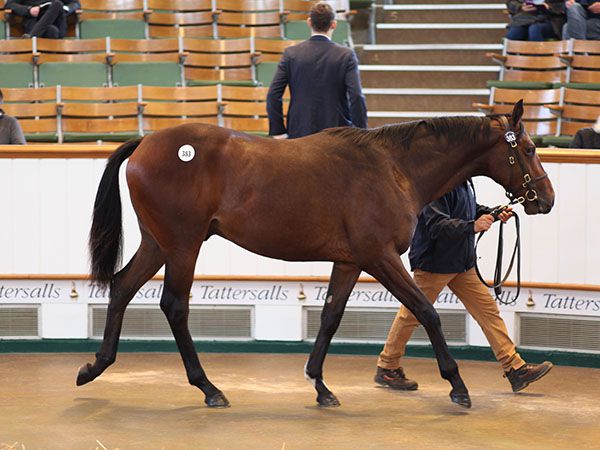 The top priced colt during the final session was the son of GALILEO out of the STARSPANGLEDBANNER mare ANTHEM ALEXANDER who realised 1,100,000 guineas to the bid of MV Magnier. He was sold by Noel O'Callaghan of Mountarmstrong Stud from a long-term family developed by the farm. ANTHEM ALEXANDER, winner of the Group 2 Queen Mary Stakes and second in the Group 1 Cheveley Park Stakes, is a half-sister to successful sire DANDY MAN.

"He is a proper horse, let's hope he is very lucky for his new people. He is going to a proper trainer and has every chance," said O'Callaghan.

Magnier secured the colt after seeing off underbidder Oliver St Lawrence and a persistent online bidder. 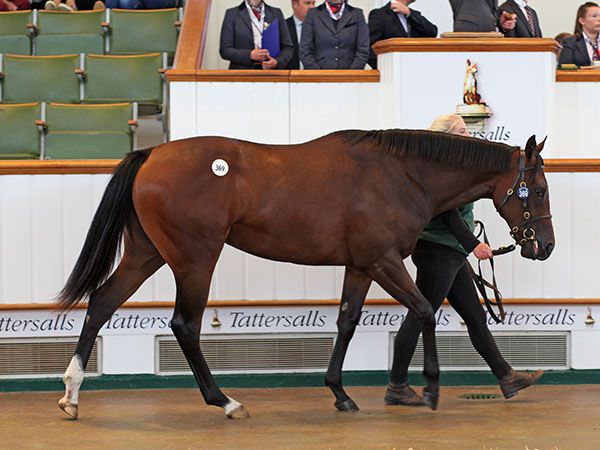 Half-Sister to Bolshoi Ballet to Al Shira’aa Farms for 925,000 Guineas

Al Shira’aa Farms had earlier bought the NO NAY NEVER filly out of the ANABAA mare ALTA ANNA for 925,000 guineas. The Glenvale Stud consigned filly is a half-sister to Grade 1 Belmont Derby winner BOLSHOI BALLET and the Group 2 winner SOUTHERN FRANCE.

Kieran Lalor, Al Shira'aa Farms stud manager, said: "She is a sister to Bolshoi Ballet and we thought she may have been the best physical. She is a strong filly, a lovely walker. She has good substance and is from a good family. She comes from a great operation and we are very excited to have her."

He continued: "We are a breeding operation first and foremost, but we do race and we have had a very good year on the track with a couple of fillies, one in France and one in the US with Christophe Clement."

Lalor added: "The boss has the final say on everything! She was really keen on this filly especially, and she makes the final decision. We will sit down after this and figure where we are going to send them. They will be staying in Europe, a couple might go to the US. It is exciting times, it is very nice to have these families. They rarely become available and I don't think many of them will be coming available, for us it is a no-brainer."

At the conclusion of Book 1 of the 2021 Tattersalls October Yearling Sale, Tattersalls Chairman Edmond Mahony commented;

“Book 1 of last year’s Tattersalls October Yearling Sale was widely regarded as a sale which showed remarkable resilience in the face of the well - documented challenges which we all endured, which makes the gains achieved this week even more creditable.

“Year after year Book 1 of the October Yearling Sale showcases the finest British, Irish, French and German bred yearlings, and year after year these yearlings go on to achieve extraordinary racecourse success on the global stage. Even by the lofty standards of Book 1, 2021 has been a truly phenomenal year with the world’s highest rated three-year-old, ST MARK’S BASILICA, the world’s highest rated miler PALACE PIER, dual Classic winner HURRICANE LANE, Europe’s highest rated two-year-old NATIVE TRAIL and the highest rated turf horse in America, DOMESTIC SPENDING, all purchased at October Book 1, and it is this consistent success which brings so many of the world’s leading buyers to the sale.

“While the figures may not have returned to the dizzy heights of 2019, and the very top of the market has made an adjustment, the average, median and clearance rate have all improved significantly and the turnover has also climbed despite a smaller catalogue. Particularly encouraging has been the depth and diversity amongst the buyers in all sectors of the market. Nine different buyers have bought yearlings for 750,000 guineas or more and in addition to the strong British and Irish participation, buyers from Abu Dhabi, Australia, Bahrain, China, Dubai, France, Hong Kong, Japan, Saudi Arabia and the USA have all made significant contributions.

“Particularly notable has been the powerful American contingent. They have been a real feature of October Book 1 in recent years and the extraordinary level of racecourse success has driven even greater demand with around 50 Book 1 yearlings acquired over the past three days heading across the Atlantic. Turf racing in America continues to grow and thrive and American buyers have clearly identified Book 1 of the Tattersalls October Yearling Sale as the premier source of superior turf horses.

“In addition to the major impact of the international buyers, it has also been rewarding to see that the lucrative £20,000 Tattersalls October Book 1 Bonus Scheme continues to entice buyers at all levels of the Book 1 market. Owners in Britain and Ireland have been rewarded with almost £7,000,000 in bonus prize money since the scheme's inception in 2016 and to see so many owners, syndicates and trainers busy this week is a tribute to the enduring appeal of the Book 1 Bonus.

“Above all, after the rigours of last year, it has been a pleasure to have welcomed so many people back to Park Paddocks. We now turn our attention to Books 2, 3 and 4 of the 2021 Tattersalls October Yearling Sale and look forward to sustaining the momentum established this week at Europe’s premier yearling sale.”

The Tattersalls October Yearling Sale, Book 2 takes place from Monday 11th – Wednesday 13th October with the sale starting at 10am each day.