The Group placed two-year-old filly ALL THE TIME and the Listed winning three-year-old filly LIMITI DI GRECCIO have been added as wildcard entries to the Tattersalls December Mares Sale. ALL THE TIME will be offered as lot 1639D by Highclere Stud on Monday 28th November and LIMITI DI GRECCIO as lot 1924C by Paddy Twomey’s Athassel House Stud on Tuesday 29th November.

Trained by Simon & Ed Crisford for the Royal Ascot Racing Club, ALL THE TIME was an eye-catching runner up in the Group 3 Dick Poole Fillies’ Stakes at Salisbury, beaten only a neck by JULIET SIERRA. The daughter of KODIAC made a hugely impressive winning debut at Nottingham in June, beating the subsequent Group 2 Lowther Stakes winner SWINGALONG by five lengths and posted another wide margin win by four and a half lengths at Chester.

ALL THE TIME is out of the winning ACCLAMATION mare MISTIME, a half-sister to the Group 3 Leopardstown 1000 Guineas Trial runner-up WHAT STYLE and to the dam of this year’s Group 3 Prix Sigy winning filly MIRAMAR. She is from the family of Group 1 winners INTENSE FOCUS, SHOLOKHOV, SKITTER SCATTER, SOLDIER OF FORTUNE and SUBJECTIVIST. 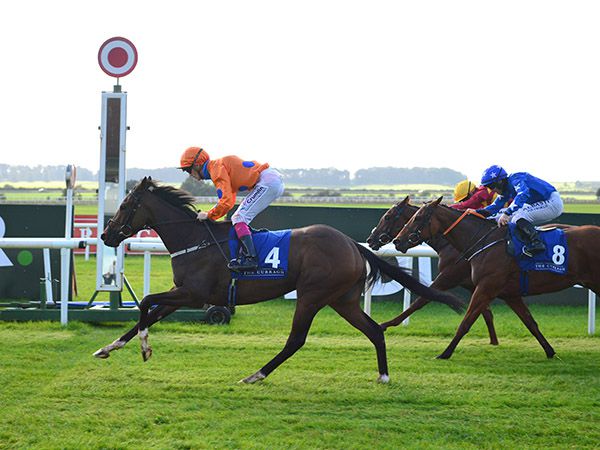 The Paddy Twomey trained LIMITI DI GRECCIO claimed the Listed Silker Glider Stakes at two by a length and a quarter from dual Group 3 winner TRANQUIL LADY and the Group 1 placed SUNSET SHIRAZ earning an official rating of 109, and was also runner up in the Listed Ingabelle Stakes. Owned by Martin Schwartz, the daughter of ELZAAM is out of the GALILEO mare GROTTA DEL FAUNO and descends from the German 1000 Guineas runner up SABRINA.

The Tattersalls December Mares Sale will take place from Monday 28th November to Thursday 1st December and features the new Sceptre Sessions on Monday 28th and Tuesday 29th November. The catalogue is online now and available from Tattersalls and Tattersalls representatives.