The beautifully bred WALDLIED was the star turn on the second day of the Tattersalls December Mares Sale, selling for 2,200,000 guineas during a session that saw four lots sell for 1,000,000 guineas or more. The turnover of 41,912,000 guineas is the third highest for any day in European auction history, with only the corresponding sessions in 2017 and 2018 bettering it. In total seventeen lots sold for 500,000 guineas or more.

The top lot on the second day of the Tattersalls December Mares Sale was the regally bred WALDLIED who was knocked down to Jill Lamb, sat alongside Graham Smith-Bernal, for 2,200,000 guineas. Smith-Bernal bought the Jacobs family’s Newsells Park Stud earlier this year and secured the mare after a prolonged battle with Crispin de Moubray.

The six-year-old NEW APPROACH mare WALDLIED won the Group 2 Prix de Malleret as a three-year-old and is a three-parts sister to the Group 1 Prix de l’Arc de Triomphe winner WALDGEIST, a four-time Group 1 winner and Joint Champion older horse in Europe in 2019. WALDLIED, who is out of the Group 3 winning MONSUN mare WALDLERCHE, was offered in foal to KINGMAN on behalf of a partnership between Newsells Park Stud and Gestut Ammerland.

"She is coming back home where she belongs, she is a beautiful mare in terms of her demeanour and attitude. She is a very special horse from a very special family. It was breaking one partnership and forming a new partnership," said Smith-Bernal. "We also own 100 percent of Waldlerche now, as well as her number one daughter so far. She was a great racehorse, I think she was rated as high in training as Waldgeist by Andre Fabre. She is a very special horse and we are absolutely delighted to have her back with us." 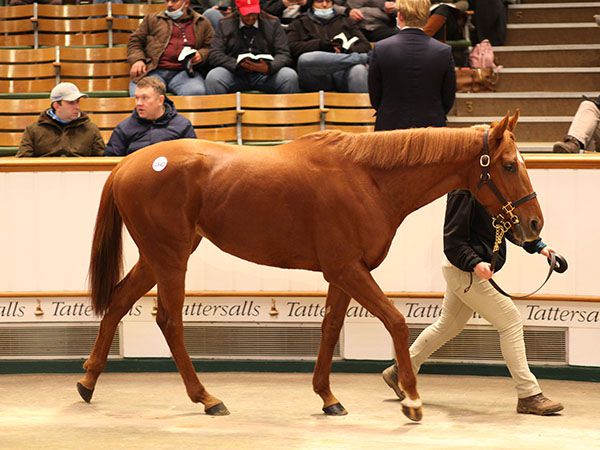 The next lot into the ring and the second to realise 2,000,000 guineas for the day was the top-class race filly CAYENNE PEPPER who was also consigned by Newsells Park Stud and knocked down to Tom Magnier at that price. The daughter of AUSTRALIA, who was purchased at the Tattersalls December Foal Sale for 195,000 guineas by Harriet Jellett on behalf of the late Jon S Kelly and went on to win the Group 2 Blandford Stakes and be placed in the Group 1 Irish Oaks and the Group 1 Pretty Polly Stakes on two occasions.

"She is a lovely mare, we knew what she could do on the racetrack," said Magnier. "Jessica Harrington held her in high regard, owner Jon Kelly was a very close friend of our family, we've had some Jon Kelly blood in Australia and it is nice to have some here too.

"She was just a lovely physical, she will go to Wootton Bassett. Hopefully we will have a bit of luck with her, all the top people have been talking about her all week, we are fortunate to have got her. It is a page we know well and when you have a page like that, and the physical and the ability, we are delighted to have her."

Tonight's sale was an emotional ten minutes for Jellett.

"Jamie McCalmont and Philippa Mains helped select her as a foal," recalled Jellett. "She boarded then with Derek Veitch at Ringfort Stud before she went to Jessie."

Jellett added: "When we saw her straight out of the box with Bumble she had such an incredible hind leg action and a lovely hip, you need an engine when you buy a racehorse.

"Jon had given us some money to buy to pinhook, but when we came to prepare her as a yearling it was decided that she wasn't strong enough or big enough – and we'd be better off to race her. It was the best decision, she is a filly that has always given her most, always does her best. Jon was such a huge part of it, he would have loved tonight, his excitement would have been palpable." 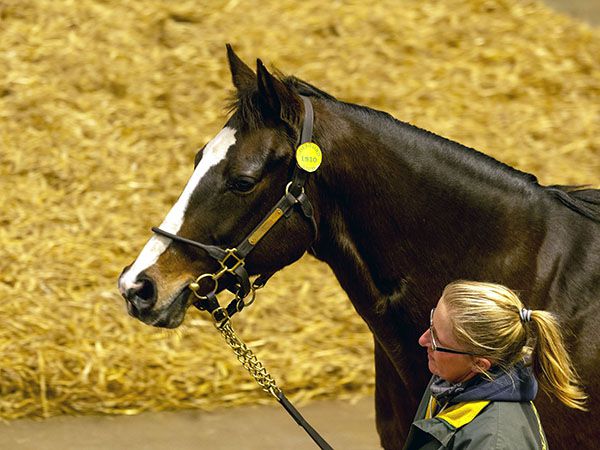 SUNDAY TIMES, the dam of Grade 1 Breeders’ Cup Juvenile Fillies Turf winner NEWSPAPEROFRECORD, always looked one of the highlights of the 2021 renewal of the Tattersalls December Mares Sale and the twelve-year-old mare did not disappoint when selling for 1,800,000 guineas to the bid of MV Magnier. The underbidder was David Redvers sat alongside David Howden, whilst both Blandford Bloodstock’s Richard Brown and Mt Brilliant Farm’s Greg Goodman made bids above a million guineas.

"She is an absolute cracker," said Magnier. "She has bred a champion and hopefully she is carrying a full-sister to her. She is a very nice mare, she has done it before and Newspaperofrecord was incredible, what she did in the Breeders' Cup that day. She will be for Wootton Bassett. There is plenty going on in the page all the way down. It is a lot of money for her, but let's hope it is worth it!"

The HOLY ROMAN EMPEROR mare SUNDAY TIMES was a top-class race filly, winning the Group 3 Sceptre Stakes and being placed second in the Group 1 Cheveley Park Stakes, and has proven just as successful in the breeding barn, producing the Listed winning and Group placed CLASSIC TIMES as well as the aforementioned NEWSPAPEROFRECORD. She is also a half-sister to QUESTION TIMES, the dam of Irish Derby winner LATROBE, the English and Irish Oaks placed PINK DOGWOOD and the Group winner DIAMOND FIELDS. She was offered in foal to LOPE DE VEGA carrying a full sibling to NEWSPAPEROFRECORD.

He said: "I am satisfied, happy about it, slightly disappointed as I have had her since a baby but there comes a time when she had to move on. I have plenty of babies from the family so it is like starting again with a young family – she has helped the cause for the young family."

Belshaw continued: "She was not sold as a yearling but she turned into a good racehorse and an even better broodmare, and the big moment of course was with her daughter in the Breeders' Cup."

All of Belshaw's mares board at Goldford Stud in Shropshire, and Aston helps Belshaw with his mating plans. He said: "Allan is such an enthusiast, he gets all the books out around him on the floor. We decided on Lope de Vega because Shamardal had already done well with the family, and we loved the toughness of Lope de Vega winning the Poule d'Essai des Poulains and the Prix du Jockey Club in such quick succession." 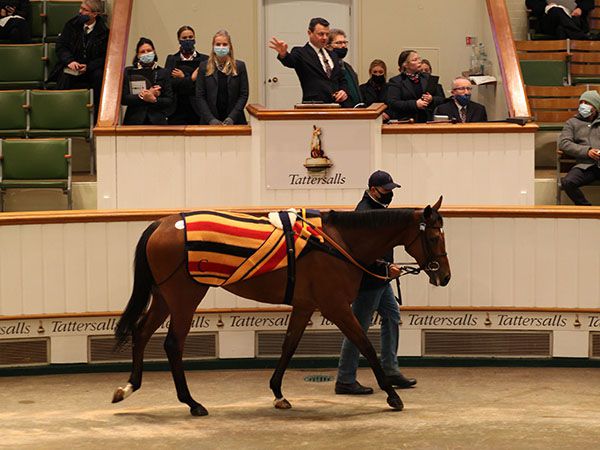 The first lot to breach the million guineas mark on the second day of the Tattersalls December Mares Sale was the Group 1 Cheveley Park Stakes runner-up FLOTUS, who was knocked down to Northern Farm’s Shingo Hashimoto for 1,000,000 guineas after he saw off both underbidder Roger Varian and Ecurie des Monceaux’s Henri Bozo.

"She is an exciting filly," said Shingo Hashimoto. "We have not decided yet whether she will race on, I need to talk to the boss – it could go either way. If she is going to race on, she will stay in Britain. She was brilliant at Newmarket, an outstanding performance, and we are very excited to have her. We are looking for good horses."

The two-year-old daughter of STARSPANGLEDBANNER out of the INVINCIBLE SPIRIT mare FLORIADE was consigned by Simon & Ed Crisford’s Gainsborough Thoroughbreds and the Crisfords understandably had mixed feelings about the sale.

"She is a beautiful filly, top-class, and we wish her new connections the best of luck for the future," said Crisford. "We are very sorry to see her go, but she has done a fantastic job for us."

FLOTUS, who also won the Listed Champion Two Years Old Trophy at Ripon two starts ago, was purchased at Book 1 of the Tattersalls October Yearling Sale for 125,000 guineas by Arthur Hoyeau.

The Tattersalls December Mares Sale continues at 9.30am on Wednesday, 1st December.